Felix W. Pawlowski taught the first aeronautical engineering course offered in the U.S. – and Michigan’s Aeronautical Engineering program became the first of its kind in the nation. But it’s Pawlowski’s unlikely path to prominence that make these achievements even more remarkable.

Felix’s classmates accused him of “possessing an empty dome for a head with little birds flying around in it.”

Pawlowski’s single-minded passion for flight was evident during his secondary school years in the 1880s in his native Poland. Young Felix glimpsed a drawing of Alphonse Penaud’s model airplane in a science book and spent the next 18 months building his own models until he got one plane airborne for a full 10 seconds. Felix’s classmates were unimpressed, and accused him of “possessing an empty dome for a head with little birds flying around in it.”

Pawlowski studied mechanical and electrical engineering, but his passion for flight remained well known. He worked his way up to chief engineer for a private firm in Poland, but its general manager told him it was “usually considered poor policy to employ a ‘lunatic’ in such a responsible position.” Undeterred, Pawlowski traveled to France, where the Wright brothers had established the first school for airplane fliers – which renewed Pawlowski’s determination to build and fly his own airplane. His methodology required him to jump from the plane and grab its tail – and to engage in other, even more unorthodox practices. But before the plane was destroyed in its second crash, Pawlowski had managed numerous flights lasting up to 15 minutes. 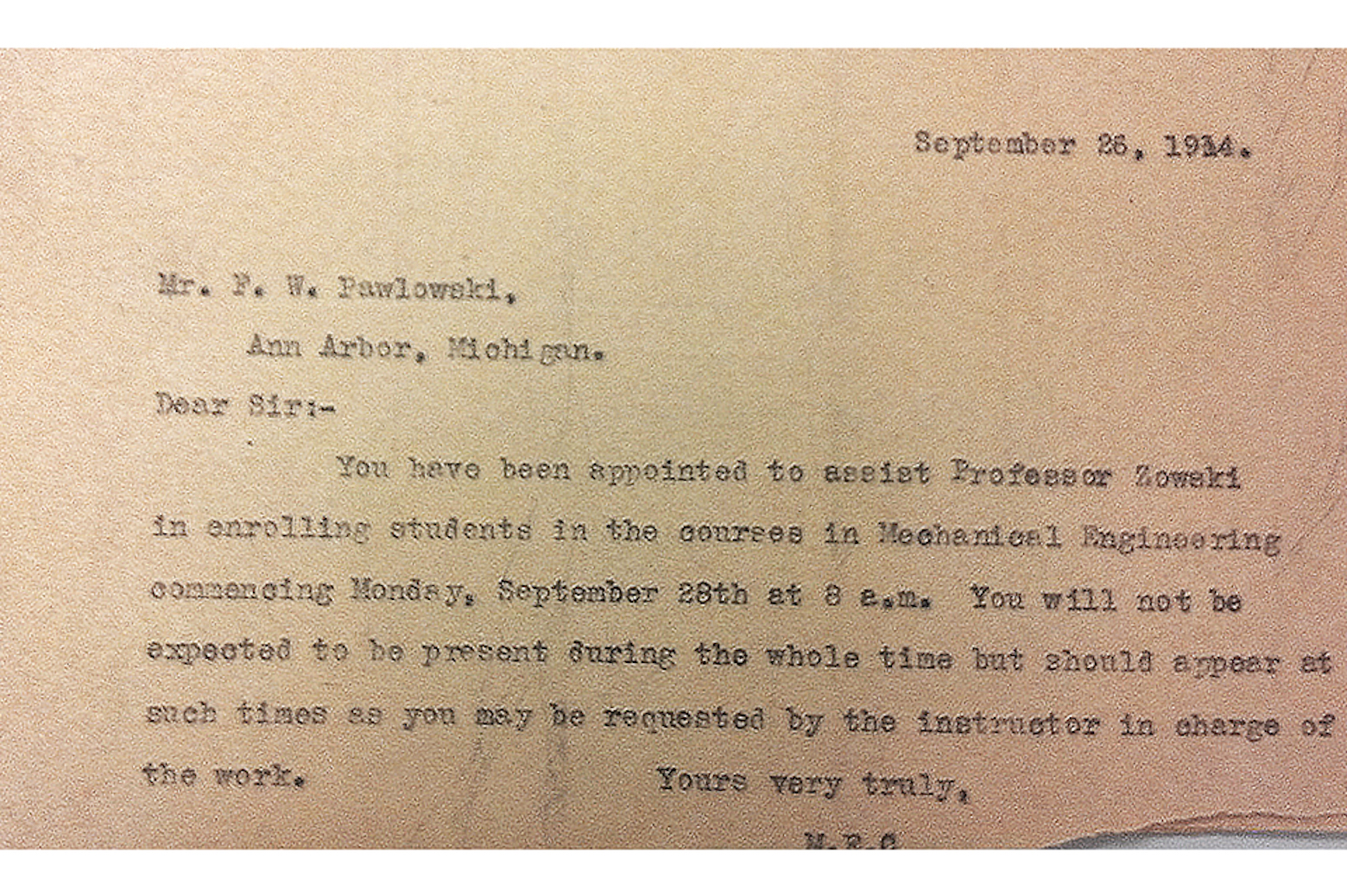 Pawlowski traveled to the U.S. to seek employment with Glenn Curtiss and Orville Wright, but his efforts failed. At nearly 40 years old Pawlowski took a job in the Midwest as an automotive designer. But he persisted in his prime pursuit by writing to a number of American universities about instituting a course in aeronautical engineering. Most did not reward his initiative with a reply. Some wrote back only to insinuate that his inquiry must have been a joke. MIT said maybe later. But Michigan’s dean Mortimer E. Cooley, as he would later write, “was interested. I wired Pawlowski to come to Ann Arbor and talk it over.”

Cooley’s offer to Pawlowski was modest: Teach courses in Mechanical Engineering as an assistant instructor, and teach an aeronautical engineering course in the near future – though when that time came Cooley admitted: “I hid this course in the Department of Marine Engineering and Naval Architecture for a time, for aeronautical engineering was not considered important enough to make it conspicuous by giving it a prominent place.”

“Pavvi” cut an exotic profile, quick-stepping across the Diag in a bear-like fur coat, a long cigarette holder hanging from his lips, a ubiquitous cane at his side.

Once on campus, “Pavvi” (as he became affectionately known) cut an exotic profile, quick-stepping across the Diag in a bear-like fur coat, a long cigarette holder hanging from his lips, a ubiquitous cane – and occasional weapon – at his side. On hot summer days, Pavvi could be glimpsed chugging down East University in his high-mounted Model T, bound for a swim at Barton Dam – his unusual continental-style mustache and goatee seeming even more out of place with Pavvi attired in his bright-red one-piece bathing trunks.

Much more than a merely colorful character, however, Pawlowski gained national recognition as an aeronautical engineer, and enjoyed high esteem, not only as a teacher but through his research, with numerous articles to his credit in both American and European professional publications. And his single-minded passion for flight helped to launch Michigan Aero to prominence. 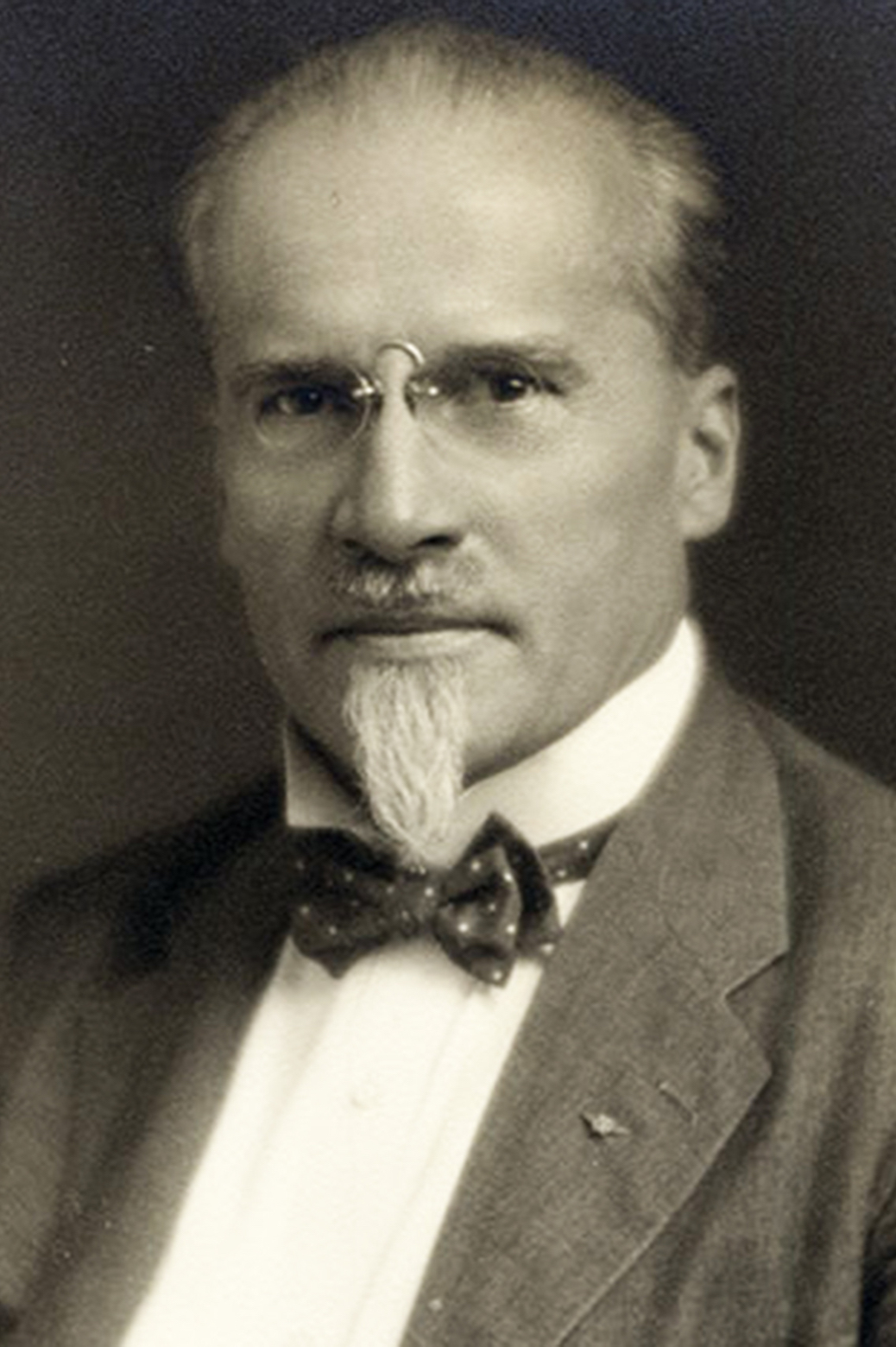 World War I and the Aftermath
During World War I, Pawlowski was granted leave to accept the position of aeronautical engineer for the U.S. Army, and when he returned to the University in 1917 he taught a special course, Principles of Aviation, which permitted students drafted into the Army to qualify or claim preference for Air Corps service. While the course kept them out of the trenches, Air Corps pilots faced planes without climate or pressure control as well as risk of mechanical failures – in addition to the dangers of combat.

Pawlowski took another leave of absence in 1919 to organize aeronautical research for the Polish Army. When he returned in 1920 he was teaching nearly all of Michigan Engineering’s courses in aeronautical engineering.

The Wind Tunnel and the Guggenheim Fund
As pressure for research capabilities grew, Pawlowski traveled to Germany in 1924 on a wind tunnel fact-finding mission, and he returned with a design even more advanced than those he had found on his journey. Included in the plans for the East Engineering building, the tunnel was built into the foundation of the new structure and completed with the aid of a gift of $28,000 from the Guggenheim Fund. The Guggenheim fund also provided $50,000 for a 10-year professorship of applied aeronautics, and in 1929 Pawlowski was appointed to the Guggenheim professorship.

Every graduate engineer will long remember Professor F. W. Pawlowski, not only a distinguished educator and true friend but a gentleman as well.

Late in Pawlowski’s career, Michigan Technic published a profile, which included this sentiment:

Every graduate engineer in Aeronautics from the University of Michigan will long remember Professor F. W. Pawlowski, for he is not only a distinguished educator and a true friend of his students but a real gentleman as well. Perhaps the summer term will mark the end of the career of Professor Pawlowski as an educator for he is nearing the retiring age; nevertheless, his reign will be long remembered in the hearts of his students as part of the tradition that has made Michigan a great University.

In 1946 – more than 30 years after he first kindled interest in aviation at Michigan – Professor Pawlowski retired to live in France, where he settled in Pau – a small town at the foot of the Pyrenees, where in 1909 the Wright brothers established the world’s first flying school. Just five years after Pavvi retired, on February 17, 1951, members of the engineering department and others who knew him felt a great loss when they received the news that Pavvi had died.

Sources for this story include A Century of Engineering Education, Emerson W. Conlon (1954) and The First Fifty Years, Robert P. Weeks (1964)