Chihiro Kikuchi: From here to the laser

Just several years after being hired in 1955 by the University of Michigan as a Willow Run Laboratory associate research physicist, Chihiro Kikuchi had already made such an original contribution to the development of the ruby maser that those crucial efforts now are recognized in a permanent Smithsonian Institution exhibit.

An important precursor to the optical laser, the ruby maser – a device to amplify microwave radiation – is one of the most significant solid-state devices ever developed. And it remains an important element in the amplification of microwave signals even today.

Masers are invisible to us physically and, perhaps, historically – but without them we might still not have the power of lasers at our disposal.

Kikuchi joined Michigan’s Department of Nuclear Engineering in 1959, where he would continue his research in the area of solid-state physics, radiation effects in materials and fundamental aspects of materials science until his retirement in 1982.

MASER Tag
Masers are an underrated invention initially hampered by technology’s limits. Its better-known sibling, Light Amplification by Stimulated Emission of Radiation (or LASERS), are used for everything from cutting, welding, performing eye surgery and taking photographs in space – not to mention many other frivolous applications such as light shows and cat toys. And they’re nearly iconic in our science fiction and in our popular culture.

But lasers, we can see. Their emissions are part of the visible light on the electromagnetic spectrum. Masers, on the other hand, are invisible to us both physically and, perhaps, historically – but without them we might still not have the power of lasers at our disposal.

Both lasers and masers exist naturally in space, where stimulated light and microwave emissions occur during astrophysical events such as the streaking of comets and the births of new stars.

But recreating this scenario on Earth requires a cavity to amplify the signal (light or microwave) to generate a large enough collection of “excited” atoms and to release an output signal with sufficient gain to be useful for listening for and detecting weak radiation activity from space.

Development of the MASER
In the summer of 1955, the U.S. had just built its first nuclear-powered submarine. Legos and velcro were changing American lives. Engineer Charles Townes, at Columbia University, had discovered how to make beams of radiation at short wavelengths – and the race to create solid-state MASERS (Microwave Amplification by Stimulated Emission of Radiation) was underway.

In the summer of 1955, the U.S. had just built its first nuclear-powered submarine. Legos and velcro were changing American lives.

Physicist Chihiro Kikuchi also was embarking on a maser project as part of Project Michigan, an Army surveillance technology initiative to study how low-level amounts of radiation emanating from natural objects such as the Earth could improve radar. Project Michigan engineers quickly realized they would need extraordinarily sensitive microwave receivers to conduct this work, and they believed that masers could solve this problem by amplifying these minute amounts of radiation and make their signals easier to study.

On this basis Project Michigan engineers convinced Willow Run Laboratories administrators to create a MASER program, and as luck would have it, the new hire – Kikuchi – was the perfect match. His mission since arriving at Willow Run was to study crystals by measuring how they absorbed microwaves.

Other researchers had tried using crystals as amplifiers, but the devices available at Willow Run at that time could not sufficiently amplify radiation at the short wavelengths needed for this project. To develop a maser, ions must resonate in symphony to create radiation. But instead of mimicking the work being done in other labs around the world, Kikuchi’s interest in crystals led him to examine how to create ions. It appeared to him that others were using crystals with serious limitations. Some of them couldn’t amplify radiation at wavelengths shorter than 10 cm, where much of radar work occurs. 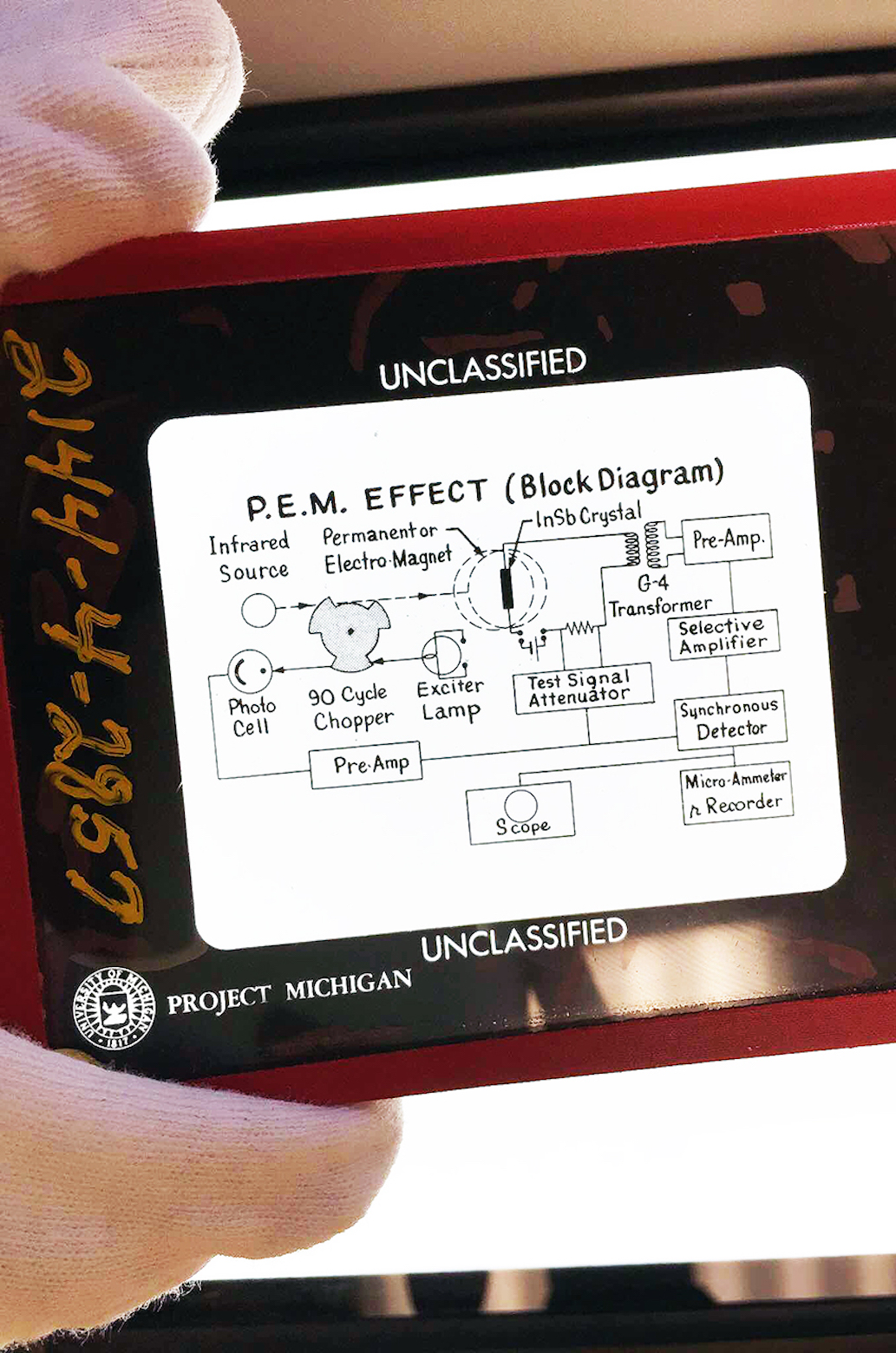 IMAGE:  A small slide featuring a diagram of the P.E.M. Effect.

At first Kikuchi explored the use of chromium trichelate, but it failed to amplify the signal, which inspired him to try a different approach. Kikuchi realized that synthetic pink rubies are simply chromium-doped aluminum oxide, and thus very easy to come by. Though readily able to borrow one from the U-M’s mineralogy department, he soon hit a calculation snag – and Willow Run didn’t have the kind of computing capacity available at some other labs to help with the intense computations needed to determine the magnetic field and the crystal’s axis. Ultimately Kikuchi determined that using a different angle simplified the necessary equations, which eased the analysis.

And it worked. His discovery enabled amplification at 9300 megahertz, or about 3.2 cm wavelengths – which was well within useful radar limits.

By then, though, it was 1957, and other labs had beat him to punch, creating solid-state masers using various other materials. But when Kikuchi and three other Project Michigan scientists debuted their ruby maser on December 20, 1957, they effectively made all other masers obsolete. The ruby – and some math wizardry – had simply made it cheaper and easier to use than all the other options. And those short-wavelength microwaves are still used today for cell phones and wi-fi.

The Aftermath: From Rubies to Diamonds?
For a while, the ruby maser was all the rage. The need for low-noise microwave amplifiers was growing. Radar was still the newest hot technology, and civilian aviation and the military markets were demanding new and better radar. As the market grew, so did the need for counter-radar technology. Ruby masers were particularly useful for detecting signals from space.

In the early 1970s Kikuchi began concentrated on, as he put it, the “strange American public reaction to nuclear power.”

Kikuchi continued his work in solid-state physics, and he taught at the U-M. In the early 1970s he began to concentrate on public issues of nuclear power and, as he put it, on the “strange American public reaction to nuclear power.” His interest in pro-nuclear power issues led to the 1979 publication of Nuclear Power: Technology on Trial, as a co-author with James Duderstadt.

Eventually the technology used in masers would be transferred to lasers, which exploded in use – while masers faded into the background. Recently, however, others have been picking up where Kikuchi left off, and research into room-temperature masers is starting to take off.

Instead of a pink ruby crystal, the first more recent attempt at a room-temperature maser took advantage of a lab-grown organic material — but maintaining stability proved difficult. Now the Chinese University of Hong Kong and the University of Stuttgart are taking a second look at the problem, examining how a diamond might help in the development of a room-temperature maser. Portable, room temperature masers could have several applications for microwave technologies, including radar and high-precision clocks, and they could be used for ultrasensitive magnetic resonance spectroscopy to study minerals.