Center for Ergonomics: changing the world of work

The decade that followed brought big changes in the world of work. Computers and computerized record-keeping were becoming more common in business, and the data they provided about manufacturing painted a troubling picture.

In the United States, healthcare costs related to lower back disorders, carpal tunnel syndrome and other musculoskeletal problems reached $100 billion annually. At some companies, a third of employees had work restrictions due to injuries. Fatigued workers produced lower-quality products. Injury downtime cut into productivity – and that cut into profits.

Employers, union leaders and government agencies such as the then-new Occupational Safety and Health Administration (OSHA) were beginning to fully grasp that this was everyone’s problem – and that everyone stood to benefit from addressing it. This confluence of concern around worker health, productivity and product quality set the stage for the rise of a new field – ergonomics. And Michigan Engineering was poised, given its history, to lead the evolution.

At the Forefront
Researchers at the Industrial and Operations Engineering department’s Engineering Human Performance Lab were uniquely situated to trace the problems back to their roots. The lab, established by Walton Hancock in 1959 to study worker productivity, grew in size, scope and influence during the 1960s and 1970s, adding faculty from disciplines representing every facet of work, including psychology, biomechanics, epidemiology and organizational structure. These researchers developed information that helped them better predict worker motions and learning times, and they studied job-related issues such as physical fatigue and heat stress. 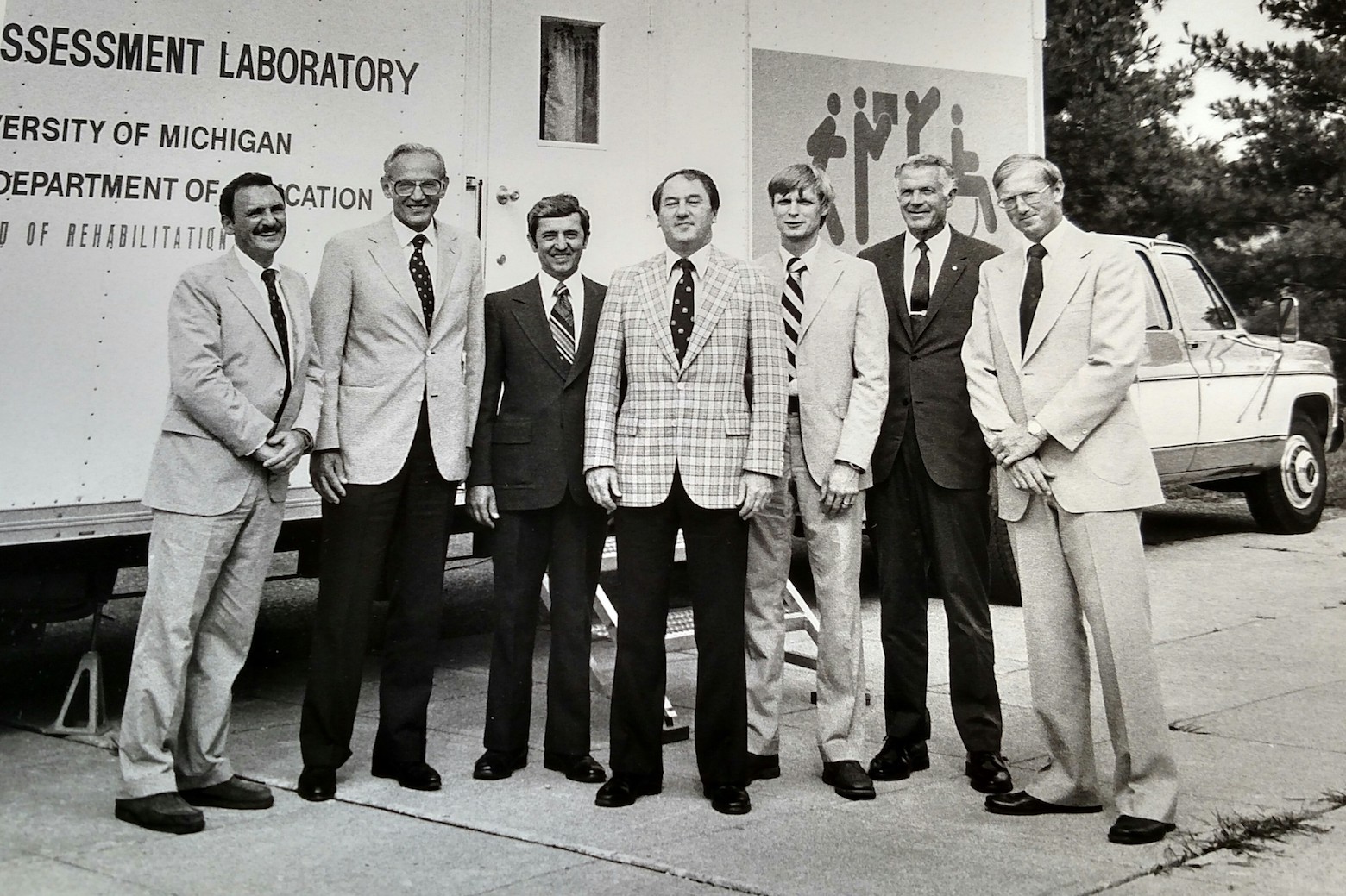 IMAGE:  Outside the Chrysler Center, at the 1979 dedication of General Motors' donation of a Chevrolet truck that pulled a trailer during a regional tour to assess workers' physical abilities and job requirements. Pictured along with several GM representatives are, from the left, Dean of Engineering Dave Ragone, University Interim President Allen Smith, Professor and Director of Rehabilitation Grant Tom Armstrong (3rd from right) and Professor and Director of the Center for Ergonomics, Don Chaffin (far right). Photo courtesy Bentley Historical Library.

“Walt [Hancock] recognized that for this struggling new industrial engineering department to become a first class program, it was going to have to have faculty who were not just teaching but doing a significant amount of research,” said Don Chaffin, an early Hancock hire and eventual Center for Ergonomics director. “If you look at the real impact of Walt, it was making sure we had a strong research program by hiring three or four really good researchers early on.”

The early human performance and safety research in the 1960s and 1970s helped to establish what would become the Center for Ergonomics. Founded in 1979, the Center cemented Michigan’s role as the leader in the growing movement to make tasks, equipment and workplaces safer and more efficient.

Building Partnerships
Proceeds from ergonomics software developed at Michigan and licensed around the world have helped to fund the Center, as have grants from industry and government. A $192,000 grant in 1971 from the National Institute for Occupational Safety and Health (NIOSH) provided critical momentum to launch the Center. Remarkably, this grant has been renewed annually ever since.

Beginning in 1980, Ford Motor Company contributed more than $2 million over a five year period in exchange for faculty studies that shaped the company’s employee involvement program. The studies helped Ford to change the dynamic between labor and management, improve the quality of its cars and reduce workplace injuries. The United Auto Workers, General Motors and Chrysler would eventually adopt similar policies. In addition to the car companies, the Center has partnered with Western Electric, ALCOA, Kaiser, United Airlines, FAA, NASA, NITSA, NIH, Jewel Food Stores, Owens Corning Fiberglas, General Tire, Firestone, and Dayton Tire and Rubber – among others.

According to the U.S. Department of Labor, workplace injury and illness cases in automotive manufacturing dropped from 238,800 in 1994 to 10,000 in 2013. And the Center’s impact continues to ripple through the automotive industry and beyond. 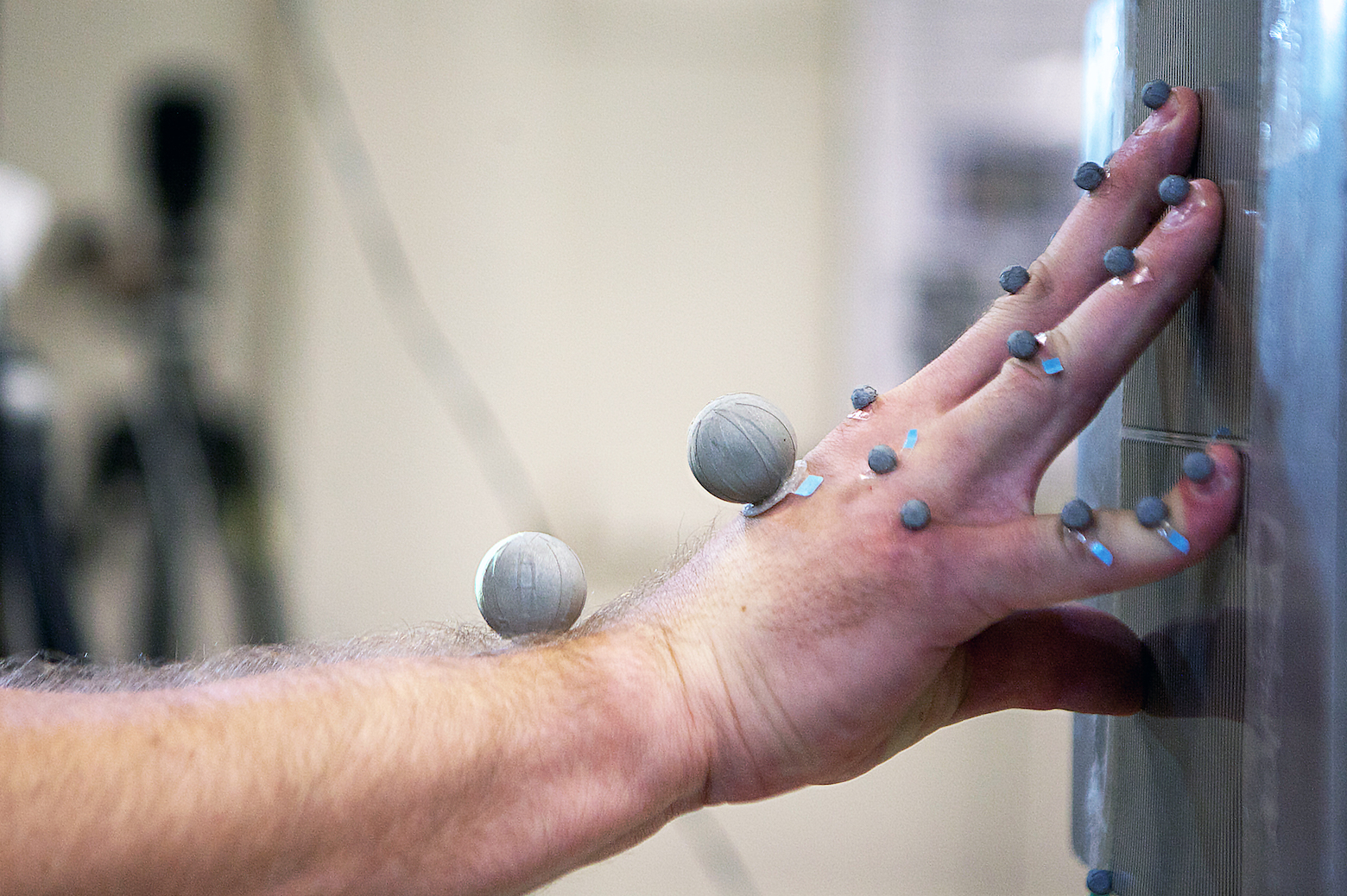 In the 1980s and 1990s, the Center’s staff trained more than 20,000 doctors, engineers and safety professionals in one- and two-week courses held at locations all over the country. The Center’s ergonomics training and job analysis program has been funded by the state of Michigan since 1992. And more than 350 Masters and PhD students have received their degrees under the guidance of the Center faculty.

Through partnerships with industry, military and other agencies, the Center’s Human Motion Simulation (HUMOSIM) Lab has collected a massive amount of human movement data that vastly improves computer modeling of workplaces and products. When used in a CAD program it produces extremely sophisticated and accurate human avatars capable of complex and subtle movements.

“They were the pioneers,” said current Center for Ergonomics director Nadine Sarter. “A number of other organizations are engaged in human motion simulation and modeling now, but these efforts were triggered, to a large extent, by the developments at Michigan. It’s great to know (the people here) spearheaded a lot of this work.”

A More Ergonomic Future
Ergonomics has become a profession, and a fixture in modern business. It’s now part of the way companies are run. And the Center for Ergonomics continues to evolve along with the environments, tools and tasks that comprise work – and life – as we know it.

Sarter hopes to guide the Center toward a future that balances its long-standing excellence in physical ergonomics with a growing expertise in cognitive ergonomics that focuses on how to support mental processes such as perception, attention, reasoning and problem-solving through human-centered design of information technologies. 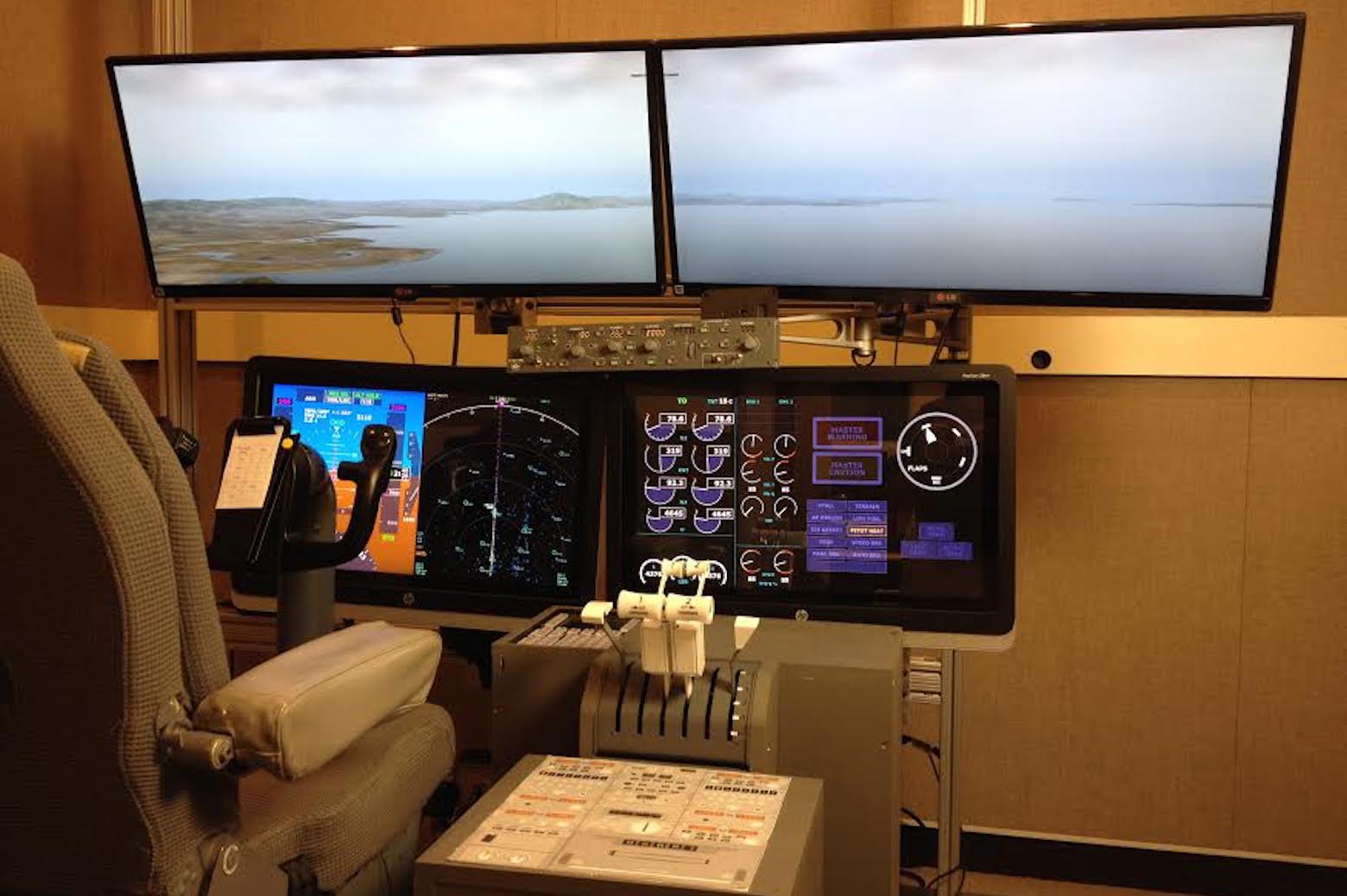 IMAGE:  This flight simulator was built by and resides in the Human-automation Interaction and Cognition Laboratory (the THInC Lab). It is currently being used to conduct research on display design for modern "glass cockpit" aircraft.

“Going forward I hope the Center will get even more involved in the design of highly automated and robotic systems,” Sarter said. “Those technologies are developing rapidly and shape the modern workplace – ergonomists need to anticipate and analyze the challenges associated with these developments and address problems before they can lead to unsafe conditions.”

In an effort to parallel and stay ahead of trends and needs in the modern workplace, the Center has recently added two new faculty members whose work focuses in areas such as human-robot collaboration and inclusive design. Major efforts also are underway to further strengthen interdisciplinary collaborations and ties to other campus units, such as the Robotics Institute.

For more about its history, see The First 50 Years of the Department of Industrial and Operations Engineering at the University of Michigan, by Don Chaffin. 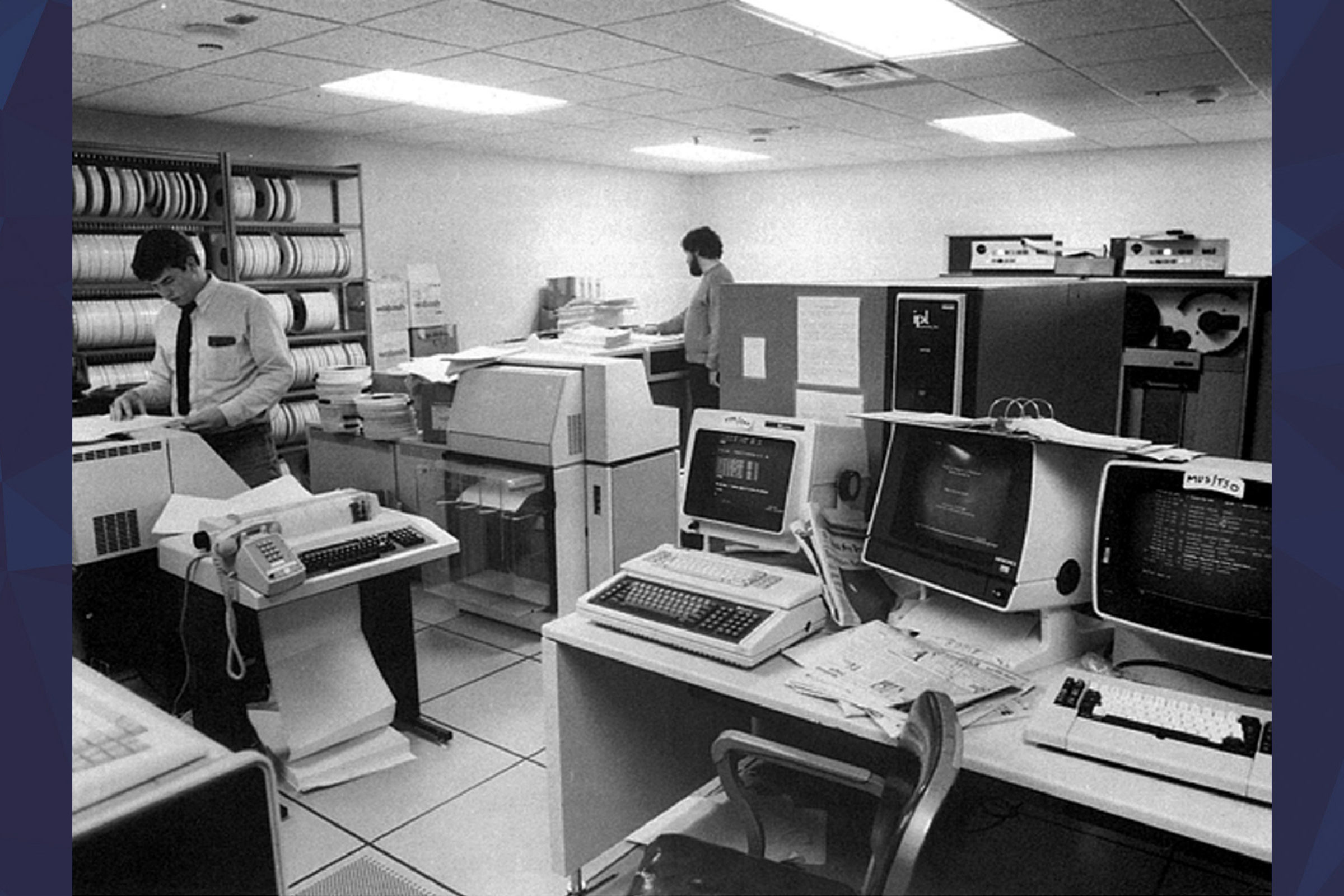 Famous as a software engineering innovator, his students revere him as a great mentor.| Medium Read 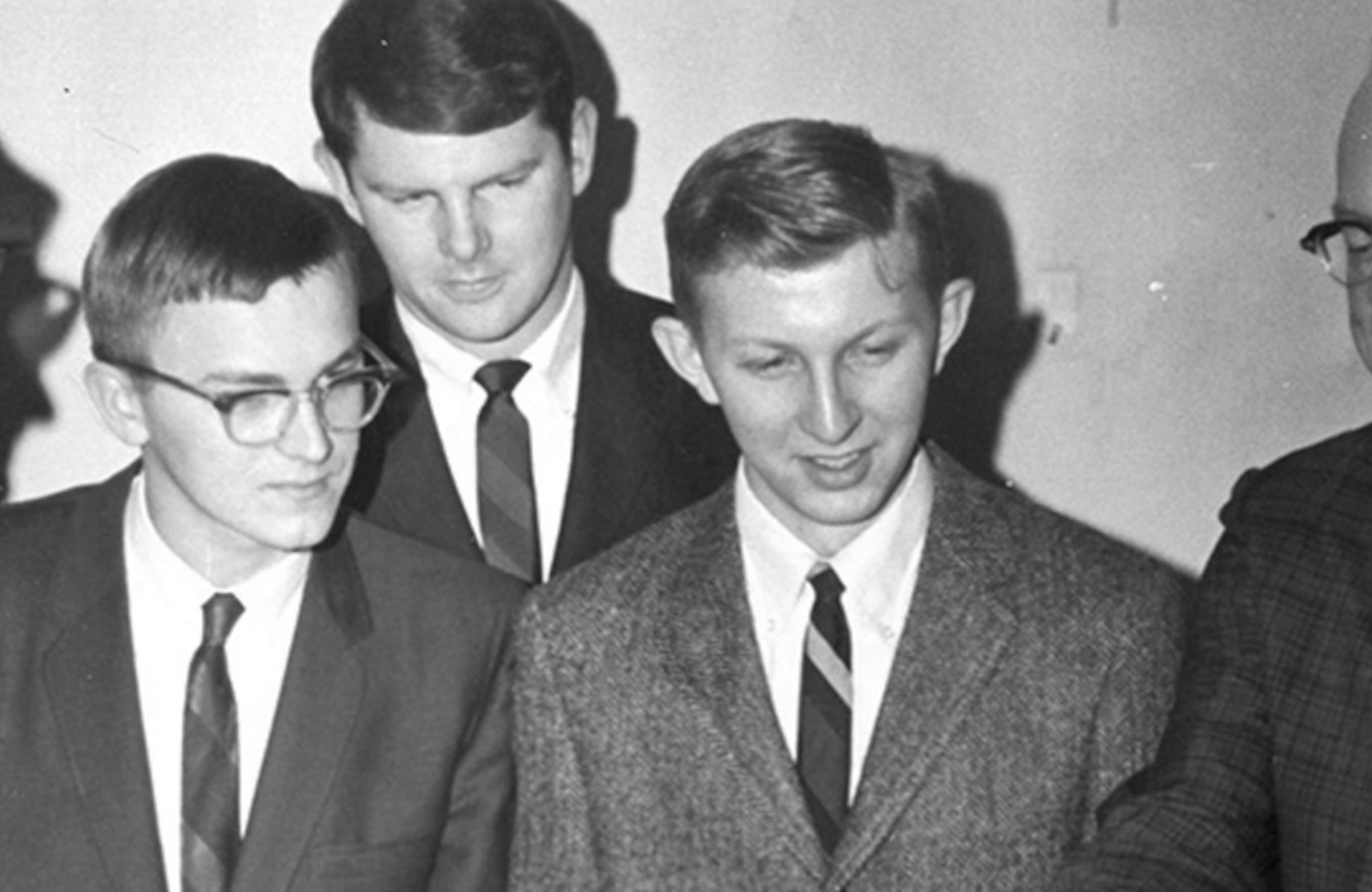