by Jan Schlain
Michigan Engineering
October 16, 2016
Founded in 1874, the camp continues to thrive as a haven for alumni.| Medium Read

If you’ve ever climbed to the top of a mountain, ventured into the wilderness – or happened upon a truly breathtaking landscape – you’ll understand why civil engineering and geology students and faculty who have spent summers at the University of Michigan’s Camp Davis in Jackson, Wyoming, consider it one of their best U-M experiences — and one of the most beautiful places in the world.

Now it is a place where 18 year old geology majors can forget about their iPhones, iPads, televisions, Instagram, apps, Buzzfeed, Spotify or Snapchat. Screen time isn’t the kind of time needed or wanted at Camp Davis. Even in the early 1900s, it was a place of solitude and seeing, learning through doing.

Camp Davis has a long and loving history – in more ways than one.

Located in Hoback Valley where the Snake and Hoback rivers meet, Camp Davis is situated on 120 breathtaking acres of University-owned property about 30 miles south of Jackson, Wyoming. You can see Cream Puff Peak from the cabins. You can smell Bridger Teton National Forest and the unforgettable scent of sage. People who enter, bond quickly.

Camp Davis has a long and loving history – in more ways than one.

A Search for Solitude
In the 1880s, what would become Camp Davis was a roaming supply of tents and equipment that traveled in the back of a U-M vehicle to lakes and lands throughout southern Michigan – Simpson Lake (1887), Clear Lake (1897) and others. Michigan Engineering professor Joseph B. Davis (CE, 1868) founded the camp in 1874 near Whitmore Lake, Michigan, as a field camp to teach and learn surveying, and he managed it for nearly 40 years.

Davis would bring three large tents to shelter ten students each. The furnishings included a sheet metal stove in the middle of a dirt floor, and a bed made from a pile of straw and blankets. And lots and lots of bugs. 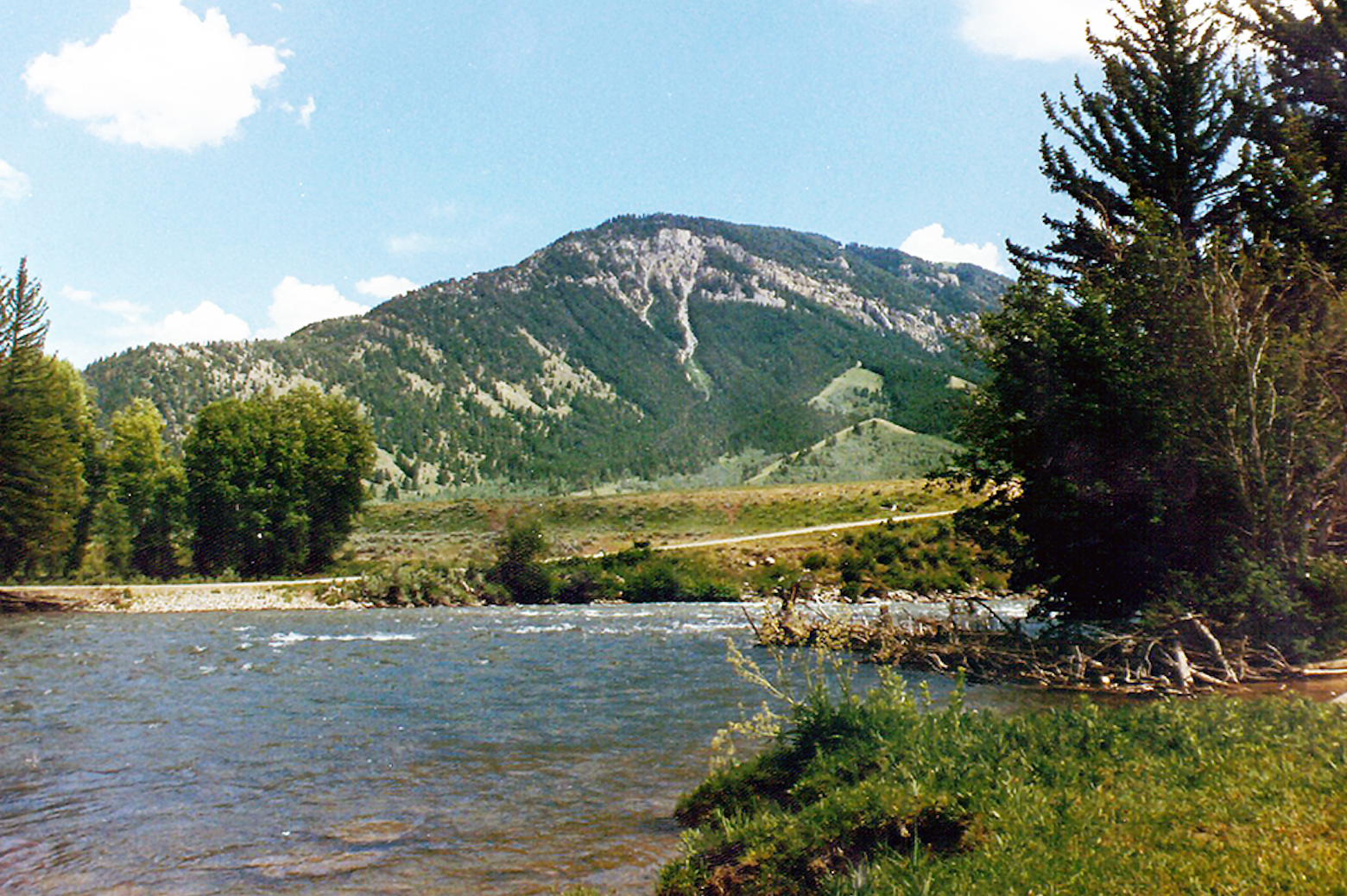 Johnson was sick and tired of the insects, rain and other weather problems in Michigan, and traveled west, searching for a better home. A place with very little vegetation, no source of insects, and lots of sight distance for triangulation. A place with a water supply, moderate summer temperatures during the day, cool temperatures at night, rolling terrain and plenty of flat surfaces.

Johnson became enthralled by the beauty and serendipity of an abandoned homestead ranch on the Hoback River – 120 acres in the Hoback Valley, within the national forest, sheltered and protected from excessive wind. In August 1928, Johnson, who was from Wyoming, and the former state engineer of Wyoming, met with Wyoming Governor Frank C. Emerson, then state engineer John A. Whiting (both Michigan Engineering graduates) and three other Michigan Engineering professors (Bouchard, Brodie, and Carey).

They decided this heavenly place in Jackson, Wyoming, was it.

Students-turned-professors, from the camp’s earliest Wyoming days, have enjoyed ascending the nearby Grand Teton. This includes one of civil engineering’s favorite sons – Leo M. Legatski (CE ’30), who attended the camp and later became a beloved Michigan Engineering professor of civil engineering. Another is Eugene Glysson, who taught at the camp, served as the camp’s director and wrote the only comprehensive history of the camp. 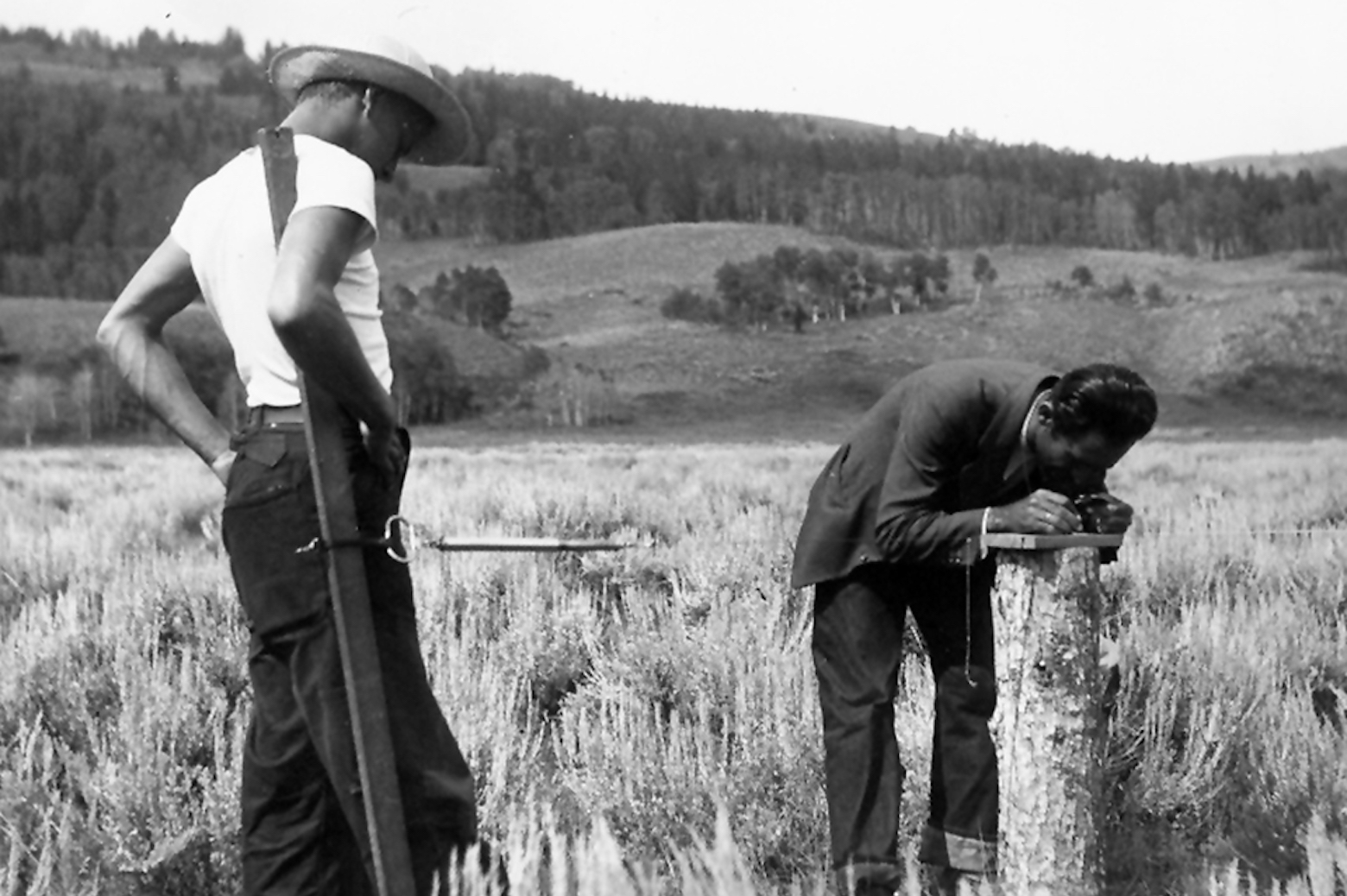 Growing Up at Camp Davis: Eugene and Ned Glysson
Ned Glysson grew up at Camp Davis. His dad, the late Eugene Glysson, taught surveying to Michigan Engineering students at Camp Davis and served as Camp Director from 1959 to 1963, when Ned was a boy. Although the camp is primarily for geologists now, in its early years it was the first-of-its-kind surveying retreat – a place where all Michigan civil engineering students went to gain hands-on experience to learn how to survey land.

The U.S. Department of Labor says surveyors make precise measurements to determine property boundaries. They provide data relevant to the shape and contour of the earth’s surface for engineering, mapmaking and construction projects. But Camp Davis was so much more than that.

To a boy like Ned, it was over the moon.

“There were a million things to do,” Glysson says. “The scenery was amazing; it was very different from Michigan. There was fishing and wildlife. There was Yellowstone. There were the Tetons. …The sky …[was] bluer. We ran wild. We went and got sodas for the surveyors. We chased prairie dogs; caught crickets.

“The smell of sage brush this time in my life,” Glysson says, “brings back all those really cool memories.”

Camp Davis’s extraordinary prime real estate is located approximately 30 miles south of Jackson, Wyoming, near the village of Hoback Junction. It abuts the Hoback River and the Bridger Teton National Forest. Of the history that his father Eugene had written, Ned jokes that his dad was not a gifted storyteller, and “wore a pocket protector his whole life.” So while the history’s there, it’s not exactly a page turner of a read. Still, the flashes of passion Eugene Glysson did show would come to the fore at Camp Davis. 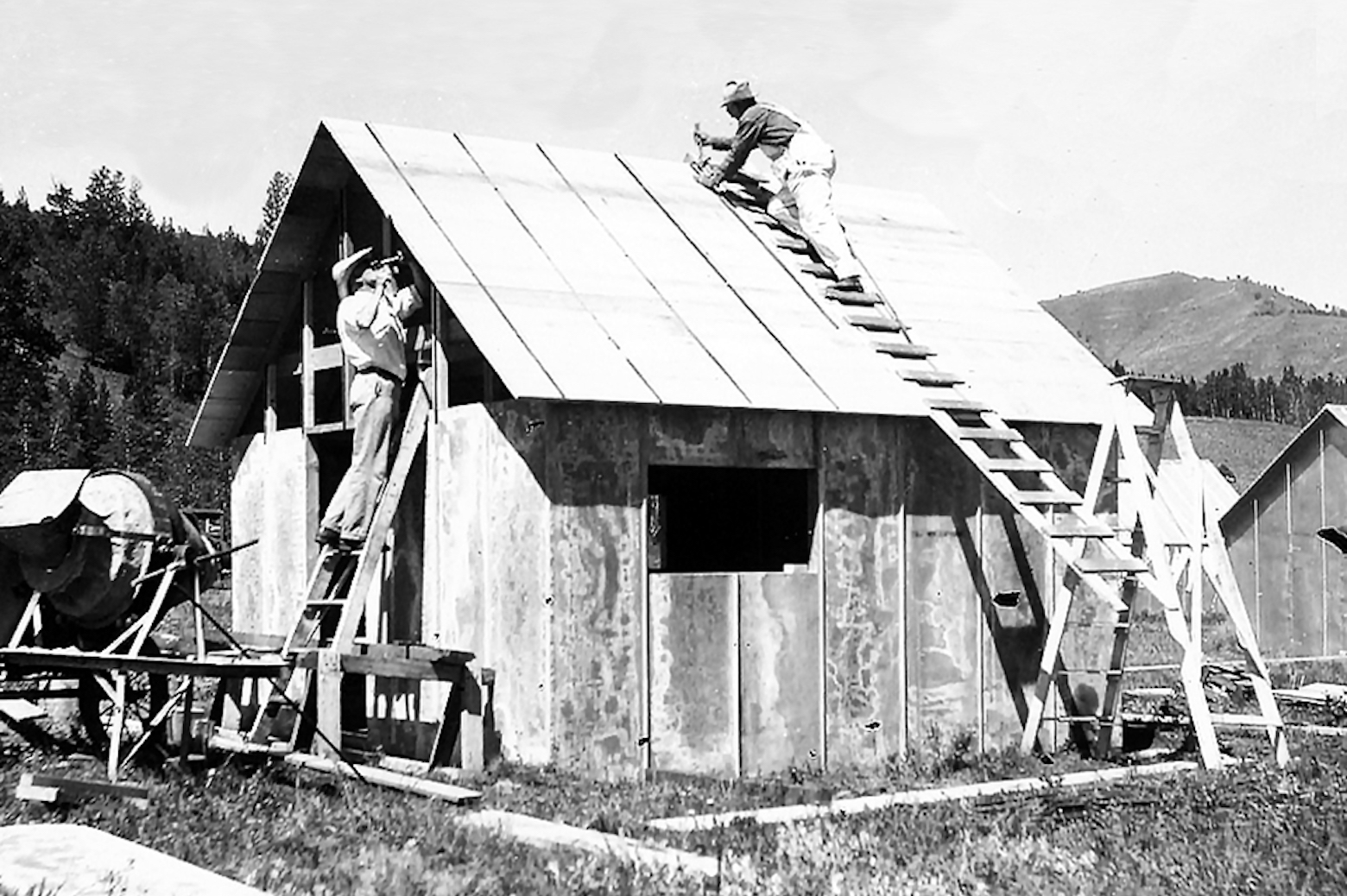 “When my folks arrived at the camp, they teared up at the first sight of it. And did so again when they left it every time, as they never knew when it would be the last time,” says Ned.

One of the great joys of Eugene Glysson’s career was directing Camp Davis in the 1960s. At that time, Camp Davis was used as a U-M summer camp, teaching both surveying field work and geology. In his essay, “The History of Summer Surveying Camp at the University of Michigan,” Glysson wrote, “Those of us who were involved still consider the experience one of the most memorable of our lives.” Glysson understood the pleasures – as well as the life lessons – it would bring Michigan students, who were free “to spend a summer in a country of marvelous natural beauty, with outstanding scenery and different flora and fauna.”

Evolving at Camp Davis: CEE alumnus Leo Legatski
In June, 1963, Leo Legatski drove a University of Michigan vehicle up Highway 189 from Rock Springs, Wyoming, to Camp Davis located about 160 miles away. The drive reminded him of the stories his father recounted about driving to Camp Davis in 1930 to study geology and surveying as a civil engineering student. “Those roads were mostly gravel, and dusty, and turned to toothpaste when it rained,” he recalled.

As the car entered the tight valley called Hoback Canyon, Legatski knew Camp Davis was only a short distance ahead. He felt the thrill, the anticipation. He spotted the outline of the rows of cabins (three cabins deep and ten cabins long). Just three years earlier, he’d completed a three-year stint as a summer employee – one year in the kitchen and two as a janitor. But this time he would be a student. 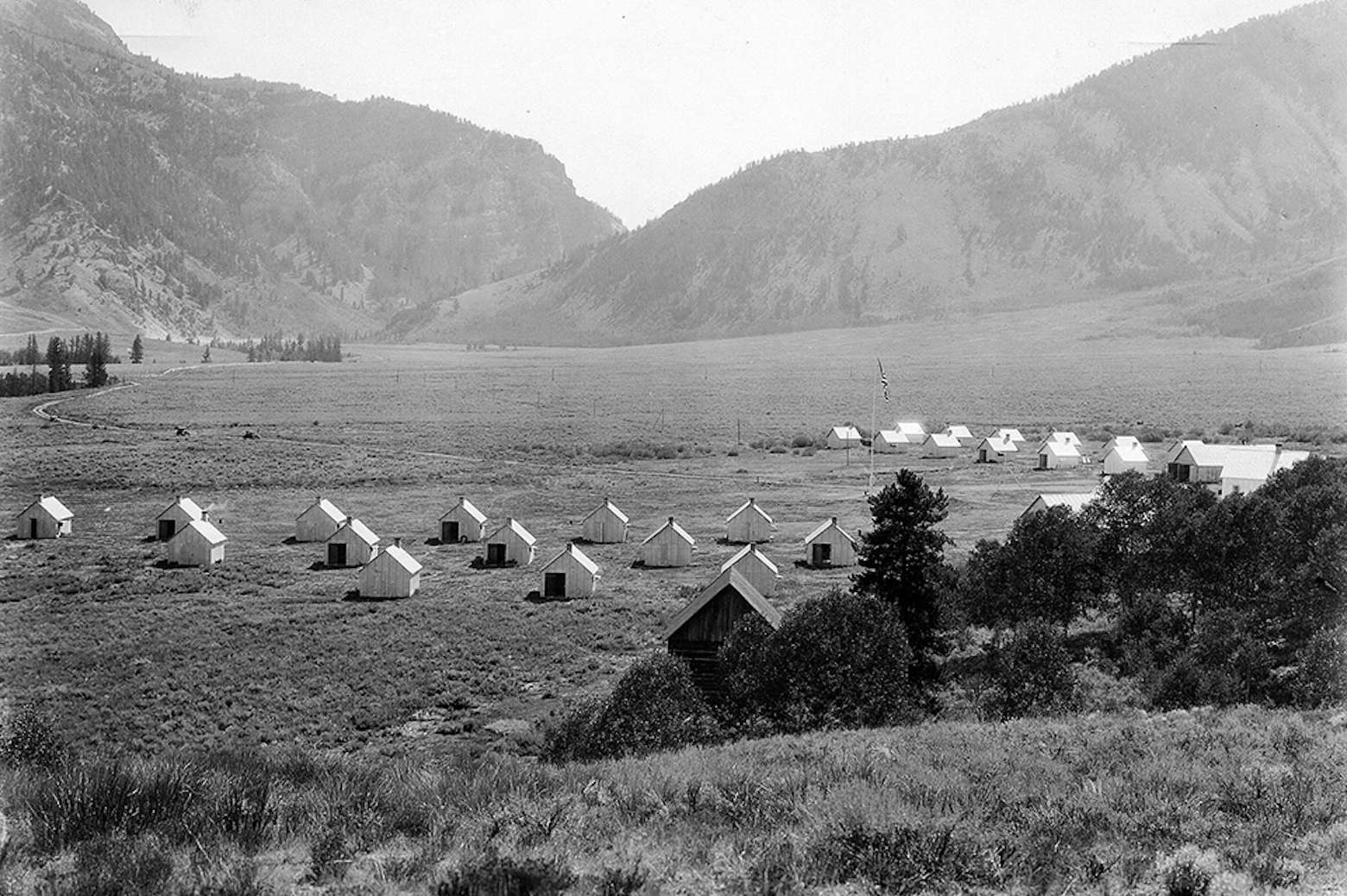 Working there, living with others, as a community, for the first time in his life – responsible for his own actions in a wide open, exhilarating place – these were formative years for Leo. Now he was a student, living on the student side of the camp, and he was evolving, exploring, becoming what he was to become. He was seeing more, feeling more, understanding more about himself. That’s what happens at Camp Davis.

Leo would become owner and president of Elastizell Corporation. He moved the company from Alpena to Ann Arbor, but he returns to Camp Davis from time to time to rekindle fond memories – which can be a little harder to come by.

“The U.S. population has gone from 140 million in the 1950s to over 330 million today,” Leo wrote. “Jackson [now] has sprawl, chain stores, traffic and ranchettes in the fields we once surveyed.”

Falling in Love at Camp Davis: Karen and Joe O’Neal
Joe O’Neal graduated from Ohio State University in 1955, came to Ann Arbor to attend law school and got a job in Michigan Engineering’s department of civil engineering testing concrete in the lab in the basement of the East Engineering Building. He later became a teaching assistant at Camp Davis when civil engineering professor Don Cortright was in charge of the camp, in the summer of 1957.

“We taught surveyors how to lay out highways,” O’Neal says. “For me, that was my first time west of the Mississippi. So going through the north and coming down through Beartooth Pass…the world opened up in a way I hadn’t experienced before. There was snow in June. I’d never seen that in my life! 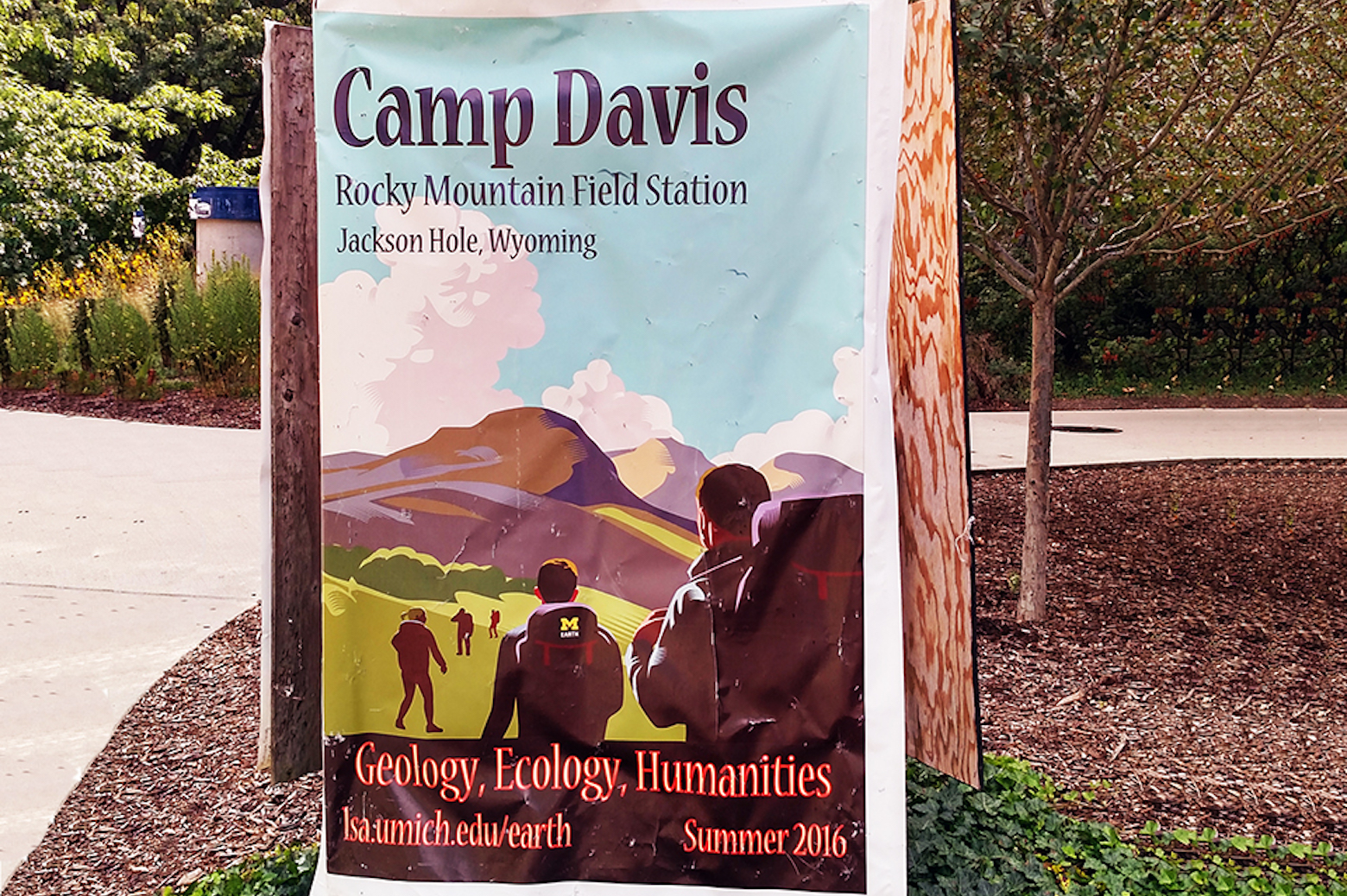 IMAGE:  Advertisement on the Diagonal, Summer 2016. Photo by Randy Milgrom.

“It’s wide open sagebrush rangeland, in between the mountains. You can do complex surveying, use complex data and lay out highway on the ground. At night, the sky is clear. The summer storms are short. You can go out unimpeded. You can find the North Star when you need to for night surveying.”

O’Neal enjoyed a second life-changing stint at Camp Davis during the summer of 1960.

Following his third year at U-M law school, O’Neal fulfilled his two-year commitment to the Air Force. The memory of his first summer was so intoxicating, he wanted to return to Camp Davis to teach again, so he asked his superiors for an early discharge.

“You get closer to yourself [at Camp Davis],” O’Neal says. “I enjoyed getting up every morning. I enjoyed looking at the sky at night. When there was a thunderstorm, a clap of thunder would reverberate from mountain to mountain, canyon to canyon. It opened my spirit.”

The camp opened his spirit and his heart in more ways than one. It was during that second summer that he met and fell in love with a young woman named Karen.

Joe and Karen married in 1963, and have been married ever since.

“If the Air Force had refused [his early discharge request],” Joe says, “my life would have been different.”

Camp Davis initially served the College of Engineering, but in 1965, management of the camp was transferred to the U-M Department of Geological Sciences (now known as the Department of Earth & Environmental Science).

For more information about Camp Davis: