by Gabe Cherry
Michigan Engineering
September 12, 2016
In a milestone that took more than a decade to reach, the Vortex Hydro Energy team is testing the first commercial-scale prototype of a device designed to generate electricity from slow-moving river and ocean currents. | Short Read
Vortex Hydro Energy, an energy startup founded by a Michigan Engineering researcher, recently tested the first commercial-scale prototype of its VIVACE device in the St. Clair River in Michigan.

It’s a perfect summer afternoon on the Saint Clair River, on the Canadian border just north of Detroit. Pleasure boats skim across the bright blue water as picnickers watch from the grassy bank. They don’t notice the fat black data cable that snakes out of the water, along a concrete pier and through a hole in the brick wall of an old papermill on the opposite riverbank. Behind that wall, under orange factory lights, sits mechanical engineer Dr. Eun Soo Kim and the VIVACE team, including electrical engineer Jason Taipale and Dr. Hai Sun, a visiting scholar in the U-M department of Naval Architecture and Marine Engineering.

In their borrowed workspace, they’re mulling over the best way to fix a generator that rests on the river bottom.  They can see that a key has slipped out of place, jamming the drive mechanism. If this were an ordinary generator, the fix would likely be simple. But it’s far from ordinary. In fact, it could be a revolution in clean energy. 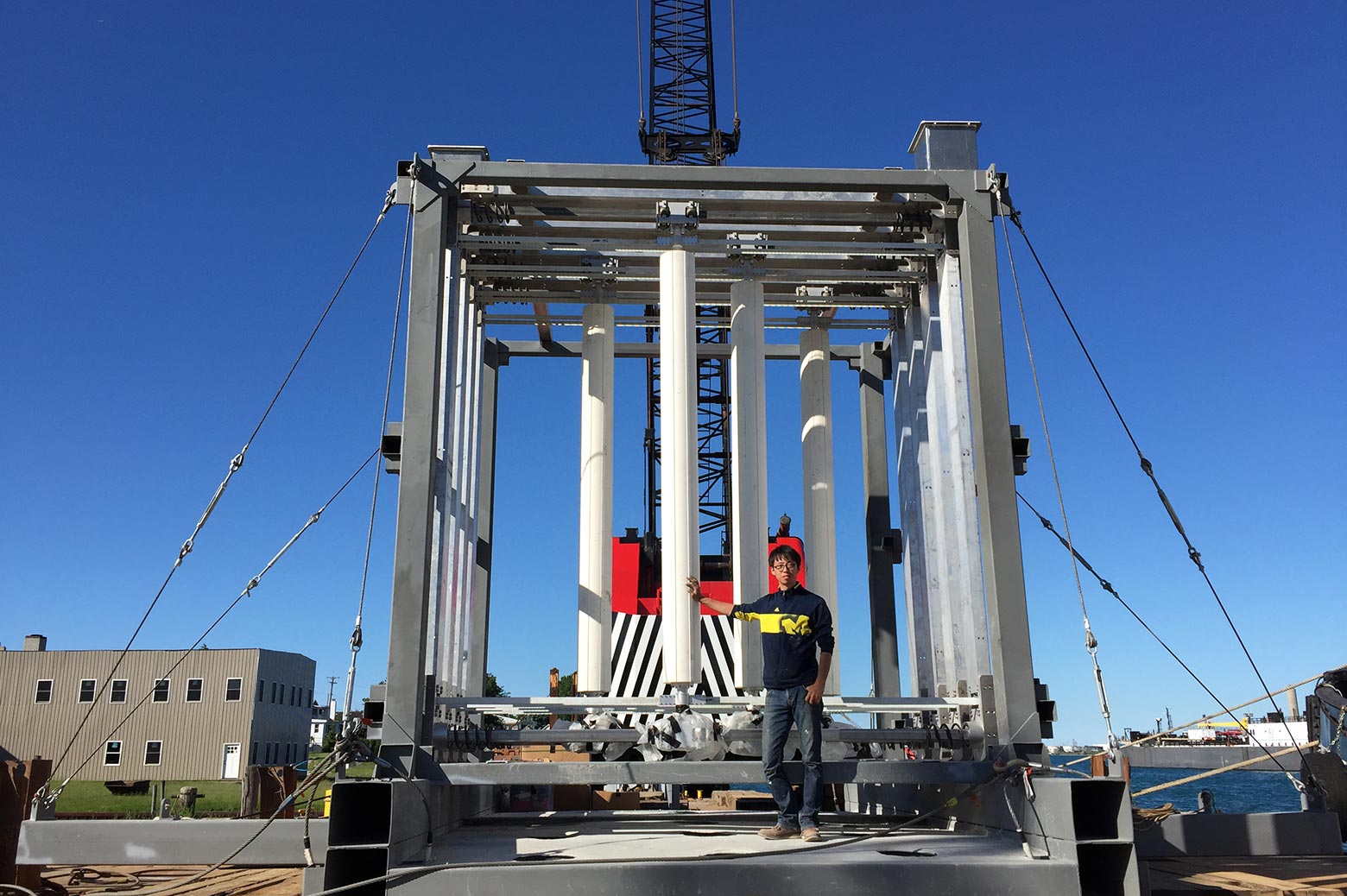 IMAGE:  Mechanical engineer Eun Soo Kim with the Vivace device, shortly before its deployment in June of 2016. The indentations on the surface of the cylinders will help water currents push them back and forth, increasing the device’s efficiency.

In a milestone that took more than a decade to reach, the team is testing the first commercial-scale prototype of a device designed to generate electricity from slow-moving river and ocean currents.  Called VIVACE, the device harnesses a phenomenon called flow-induced motion. It weighs 12 tons and is submerged in 26 feet of water.

“I imagine this would be a beautiful place for a holiday,” Kim shouts over the roar of papermaking machinery. “But we’ve been in here all summer while everyone out there enjoys the river.”

A U-M alum, Kim turned down a job with a major global electronics maker for the opportunity to work on a project that may someday rewrite the rules of hydroelectric power. He’s the mechanical engineer at the U-M startup Vortex Hydro Energy, founded in 2004 by Michael Bernitsas, the Mortimer E. Cooley Collegiate Professor of Naval Architecture and Marine Engineering at U-M.

The company is working with the U-M Marine Renewable Energy Laboratory to build and market a device that could last decades underwater, churning out power for utility companies. Their present research is funded by the U.S.Department of Energy.

The cable from outside carries a video feed of the device: a 16-foot wide, 12-foot tall steel frame with four vertical aluminum cylinders mounted on rails. The cylinders slide silently from side to side, pushed by the river’s slow three-knot current. On a typical day, each cylinder can generate one kilowatt–about enough electricity to power one home. When the device came out of the water in early September, it had been underwater for nearly three months, in a long-term, real-world test of its durability and efficiency. 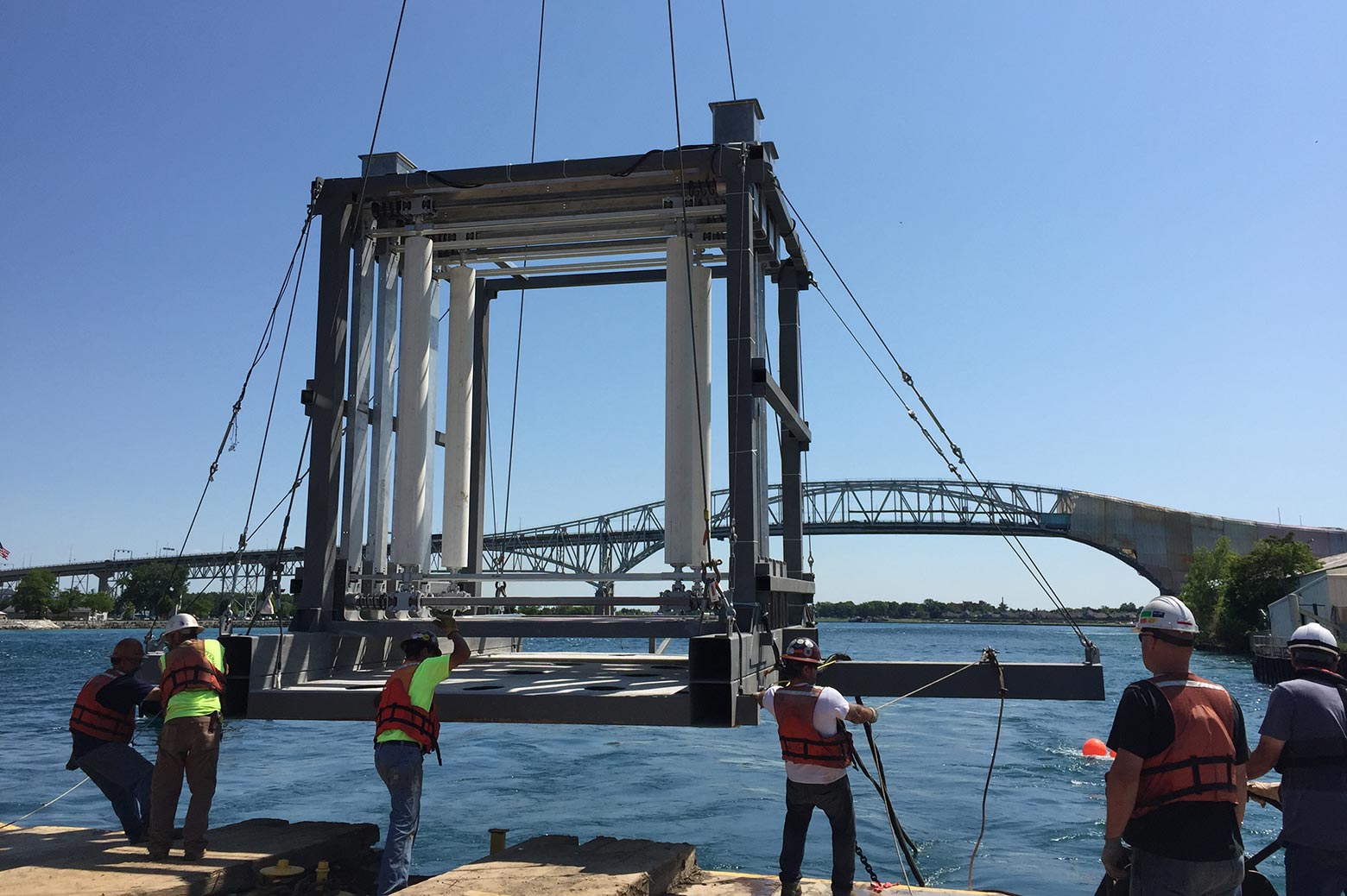 IMAGE:  Workers prepare to lower the Vivace device into the St. Clair river at the beginning of the field test in June of 2016.

VIVACE generates power mainly by harnessing vortex-induced vibrations. These are lateral movements that happen when tiny vortices—like miniature whirlpools—form in a current of air or water as it flows past a stationary object. These vortices exert alternating sideways force on the object, pushing it from side to side.

VIVACE also uses a second force, called galloping, to generate even more power. Galloping occurs when turbulence from one cylinder affects the movement of those behind it, whipping them back and forth more quickly and increasing the amount of power generated.

Most engineers consider these forces to be agents of destruction. They’ve shredded power lines, toppled chimneys and buildings and demolished offshore platforms. They even caused the spectacular destruction of the Tacoma Narrows Bridge back in 1940. Generations of engineers have dedicated their careers to fighting them. But Bernitsas and the VIVACE team are doing just the opposite.

They see flow-induced motion as a way to harness slow-moving water currents and revolutionize hydroelectric power generation. Their device could one day make it possible to generate power from river and ocean currents around the globe–most of which flow at speeds far below those required by today’s hydroelectric devices.

“Today’s hydroelectric devices are turbines, so they’re based on water mills and propellers,” he said. “And that’s not the natural way of moving in water. Flow-induced motion, on the other hand, is everywhere.”

Bernitsas believes that harnessing the energy in slower-moving water would dramatically increase the world’s potential for hydroelectric power. He says VIVACE is also better for the environment than today’s hydroelectric generators—it doesn’t require disruptive and environmentally harmful dams, and its slow-moving cylinders are friendlier to fish and other wildlife than a fast-spinning turbine.

But taming one of nature’s most destructive and unpredictable forces hasn’t been easy. Learning how to harness complex flow-induced motion has taken decades of research, dozens of papers and countless lab and field tests. And they’ve found that often, conventional knowledge isn’t much help.

For example, that knowledge suggested that to generate power efficiently, VIVACE’s cylinders would have to be spaced far away from each other to minimize the interference between them. This is standard practice with turbines, and the team assumed VIVACE would work the same way. It didn’t.

“We probably wasted a year and a half, placing the cylinders further and further apart and still getting interference,” Bernitsas said. 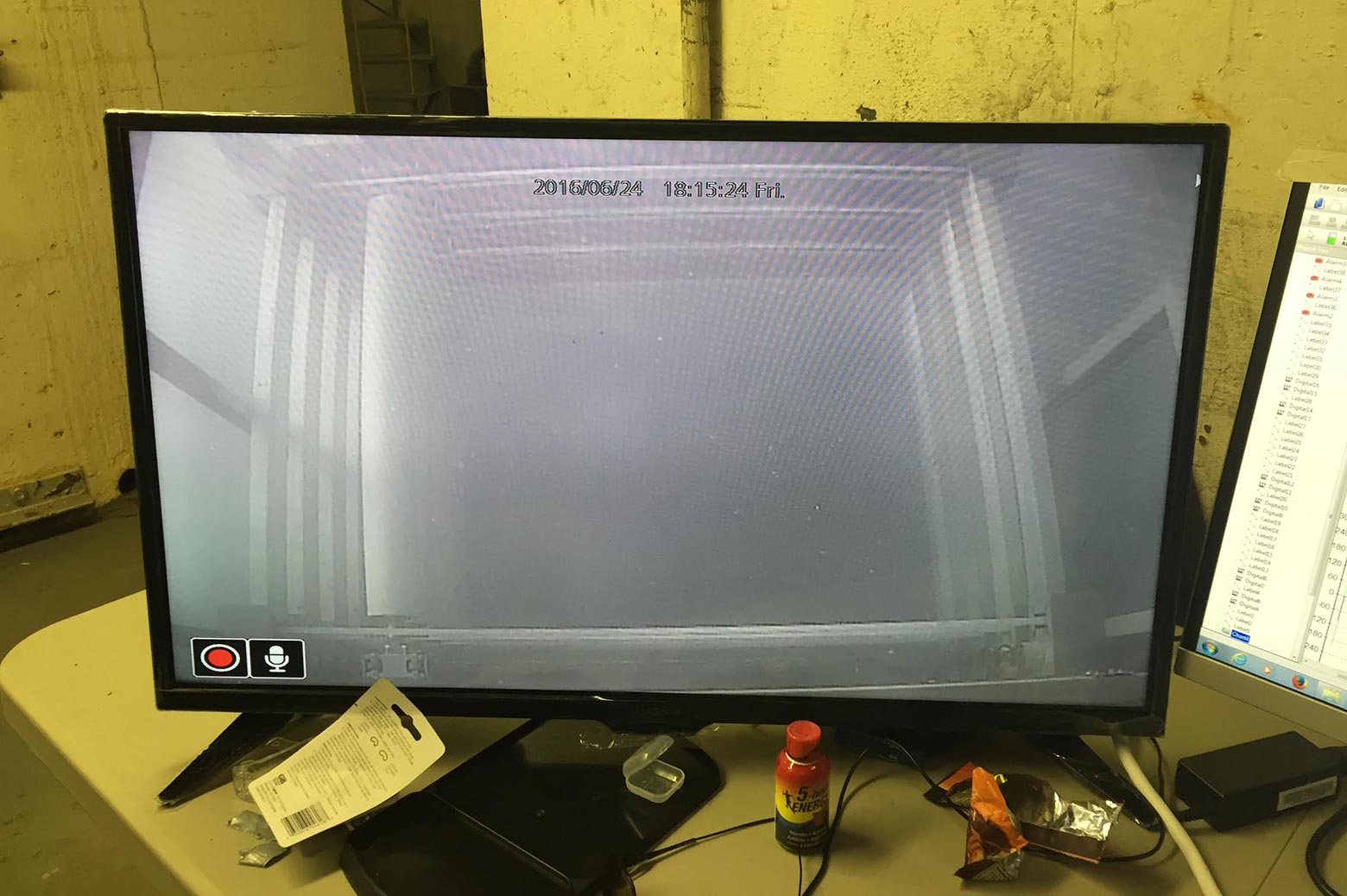 IMAGE:  Vortex Hydro Energy’s workstation at Dunn Paper on the bank of the St. Clair River. The VIVACE device is visible on-screen.

Ultimately, the team solved the problem by eschewing the engineering literature and instead learning from fish. In schools, fish undulate their bodies to squeeze between the alternating vortices created by their schoolmates. This pushes them forward efficiently.The VIVACE team reasoned that they could use the same idea, placing the cylinders closer together to take advantage of turbulence rather than fighting it. The discovery was a breakthrough that led to the current device’s configuration, with four closely-spaced vertical cylinders. The ability to generate more power in less space, Bernitsas explains, is crucial to helping renewable energy compete with fossil fuels.

“Power density is the Achilles’ heel of renewable energy technologies, and the ability to put cylinders close together puts us far ahead of other renewables,” he said. “Big wind farms generate about 0.01 watt per cubic meter of space when the wind is blowing at 12 meters per second. We get about 800 watts per cubic meter from an equivalent flow of water–80,000 times higher. But we’re still three orders of magnitude below fossil fuel.”

Back at the test site, the VIVACE team determines that they’ll need to hire a specially trained diver to fix the mechanical drive problem. The fix will cost twelve thousand dollars, and with the diver’s busy schedule, it won’t be complete for several weeks.

It’s a frustrating situation, but the team takes it in stride. After all, solving problems like this is the reason they’re out here. Dealing with complex and unpredictable currents, tweaking the machinery to stand up to gritty river sediment and finding the best way to get the massive device into the water are all steps that could never be duplicated in a lab. While a commercially viable device is likely years off, this fix—and the others that will inevitably follow—will put the team ever closer to a new, commercially viable source of clean energy.

“We have a good device, but taking principles from schools of fish and turning them into mechanical devices takes time,” Bernitsas said. “It’s a long process, but for us, it’s also very exciting.”

The University of Michigan announced today that it was awarded $3.9 million in funding from the U.S. Department of Energy’s Advanced Research Projects Agency-Energy (ARPA-E). The funding will be used to harvest hydrokinetic energy using reconfigurable high-efficiency marine micro-turbines.| Short Read
Researchers