Will nuclear energy save us from climate change?

by Kate McAlpine
Michigan Engineering
September 30, 2016
Energy-sector thought leaders, from industry, government and academia, recently came together at the University of Michigan to discuss the role of nuclear power in fighting climate change.| Medium Read
Enlarge

IMAGE:  Bill Magwood, Director-General at the Nuclear Energy Agency of the Organization for Economic Co-Operation and Development, speaks during a discussion panel at the Michigan Energy Symposium at the Rackham Graduate School on September 26, 2016. Photo: Joseph Xu, Michigan Engineering.

Nuclear advocates argue that if we were serious about holding the planet to a two-degree-Celsius temperature rise or less – above which many researchers predict serious consequences such as sea-level rise, ocean acidification, and mass extinctions – we would be tearing down coal-fired plants and replacing them with nuclear power plants as quickly as we could. But we’re not.

A quick poll on attitudes toward nuclear power by Andrew Hoffman, the Holcim (US) Professor of Sustainable Enterprise at U-M, revealed that there was a strong pro-nuclear skew in the audience of the first panel discussion. The two most telling questions concerned nuclear safety and nuclear waste – problems that many engineers consider to be solved, at least technologically.

Bill Magwood, director general of the U.S. Nuclear Energy Agency, said that soon deep geological repositories will be available in other countries, such as the Onkalo repository licensed for construction in Finland last year. He said that the attitude, “will change from ‘It’s an insolvable problem,’ to ‘Why can’t we do what the Finns just did? Are we not as smart as the Finns?’”

Nuclear waste can be burned up in a variety of advanced reactors, some of which are already in operation in France and Canada, as was pointed out by Carl Page, co-founder of the Anthropocene Institute. The waste from these reactors will have a dangerous level of radioactivity for just a few centuries rather than 100,000 years. Likewise, new nuclear reactor designs are inherently safe: the nuclear chain reaction can’t be sustained in situations such as the coolant overheating, and they automatically shut down when the power is cut.

While there was little argument that safety and waste disposal could be under control quickly with the right policy decisions and oversight, a lively discussion followed when Mark Jacobson, a professor of civil and environmental engineering at Stanford University, raised the potential for waste to be diverted for nuclear weapons.

Nordhaus went on to make the case that Iran’s enrichment facilities were never intended for civilian nuclear power. Jacobson suggested that the intent was to hide the weapons program behind civilian nuclear power. While no country is known to have used a civilian reactor to reach weapons-level concentrations of uranium or plutonium, experts remain divided over the concern.

Panelists in nuclear power – particularly in research and government – cited public opposition to nuclear power as a major roadblock to its adoption to reduce carbon emissions. Robyn Wilson, a professor of risk analysis and decision science at Ohio State University, said that there is a lot of room to sway public opinion on nuclear power because surveys show that most people don’t have well-formed impressions.

“Public opinion is very malleable on this issue,” she said, recommending that nuclear proponents frame nuclear power around issues that people care about: the environment, the climate, highly paid local jobs, and U.S. technological leadership. 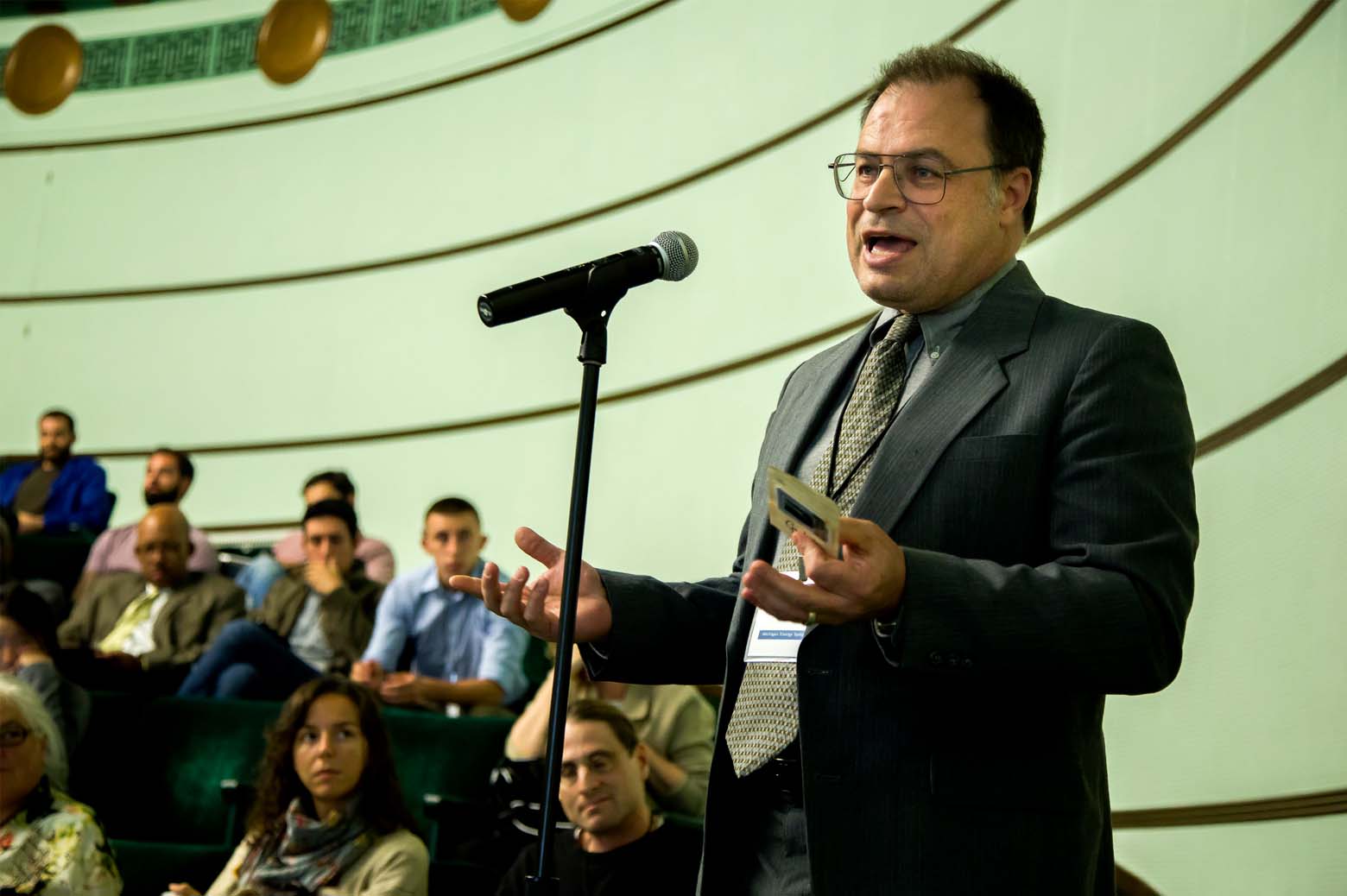 IMAGE:  John Kutschasks a question during a discussion panel at the Michigan Energy Symposium at the Rackham Graduate School on September 26, 2016. Photo: Joseph Xu, Michigan Engineering

Panelists from utilities tended to point to the cost of building a nuclear power plant as the main problem. Nuclear plants cost around seven times what it costs to build a fossil fuel plant with the same generating capacity, according to Daniel Malone, the senior vice president of energy resources at Consumer’s Energy.

While there was general agreement that policy has been unsuccessful at leveling the playing field in energy, panelists also locked horns over the best ways to put coal, gas, nuclear, solar and wind on fair footing. Most supported penalizing carbon; Magwood spoke for a carbon tax, and Jim Rogers, the retired CEO of Duke Energy, favors cap and trade. But Nordhaus held that these restrictions on the market have led to better efficiency and switching among fossil fuel sources rather than opting for emissions-free power generation.

Nordhaus mocked the market-based approach, saying, “If we really thought about climate change as a looming existential threat, like an asteroid coming toward the planet, we wouldn’t say, ‘Let’s put a price on asteroid destruction and incentivize the private market to destroy the asteroid.’”

Geoffrey Rothwell, principal economist for the Nuclear Energy Agency, also believes that fossil fuels are too entrenched for the market to address climate change. “This is the question: are markets compatible with reducing CO2? And I think they’re oil and water,” he said.

He explained that while markets are good at short-term efficiency, they don’t look far enough into the future protect those who are being born today.

And it’s not just the markets, said Fred Buckman, President and CEO of Powerlink Transmission. Power companies and politicians are sensitive to the interests of the voters, and voters prefer cheaper electricity rates to investment in more expensive but cleaner energy.

Looking to the future

In spite of the economic challenges, Tom Catania, an executive in residence at the U-M Erb Institute for sustainability through business, argued that the roughly $14 billion price tag on a new nuclear power plant is not insurmountable. “In an era of negative yields, there are piles of cash looking for investments. I don’t accept that in the right policy environment we can’t get investment,” he said.

As another way to reduce the upfront cost of nuclear energy, Nordhaus and Catania referred to smaller reactors under development. The company NuScale, represented by director of research collaborations Daniel Ingersoll, is building 50 mega-watt reactors that can be run in arrays of up to twelve modules. This approach, known as small modular reactors, would allow nuclear power plants to start small, adding capacity as demand grows and funds become available.

Panelists also discussed the particular challenges of the present nuclear renaissance. Government funding for advanced nuclear facilities dipped down to zero in the 1990s, putting the U.S. “behind the curve” compared to nations with strong nuclear industries, said Todd Allen, a senior fellow at the centrist think tank Third Way.

Starting now with just a few new nuclear power plants makes construction relatively difficult. “Without building a lot of plants, you don’t have the right infrastructure of expertise, so it’s harder to do,” said John Gilleland, the chief technical officer of the nuclear energy technology company TerraPower.

Regardless of nuclear, Fessler looked ahead to two game-changers: energy storage and distributed generation. While storage is critical for intermittent energy sources such as wind and solar, it could also help nuclear power plants. When a nuclear plant’s electricity production is ramped up or down, it is thought to put stress on the fuel, and storage could ensure that additional electricity is available during times of peak demand such as hot summer days.

Rogers also emphasized distributed generation. He has been investigating how best to bring power to the 1.2 billion people in the world with no access to electricity. He concluded that technologies like solar power and wind power are most promising because capacity can be built up over time, as funding allows, and they do not require an expensive, complex and far-reaching grid to carry power from a few central sources.

But whether or not nuclear is the answer in countries that are just beginning to build their energy infrastructures, there was agreement that carbon-free energy was critical in these areas.

“If you look out 50 or 100 years, those are the sources that are going to dominate our impact,” said Jess Gehin, director of the Consortium for Advanced Simulation of Light Water reactors (CASL). CASL is a $250 million, 10-year project seeking to build a high-fidelity computer simulation of water-cooled reactors through a collaboration of four national labs, three universities (including U-M) and three industry partners.

Nuclear’s role in the the global energy future depends mainly on whether we as a society are willing to invest in it. But one thing is certain: until an energy storage solution can smooth out the intermittent availability of wind and solar power, nuclear power is the only option for reliable carbon-free baseload electricity.

Creating novel interdisciplinary solutions for global sustainability is a top priority for the U-M College of Engineering’s transformational campaign currently underway. Find out more about supporting sustainability efforts in the Victors for Michigan campaign.