Despite nearly-sunless conditions in the final two days, the University of Michigan Solar Car team has successfully defended their decade-long reigning championship – winning the 2016 American Solar Challenge for the sixth consecutive time. 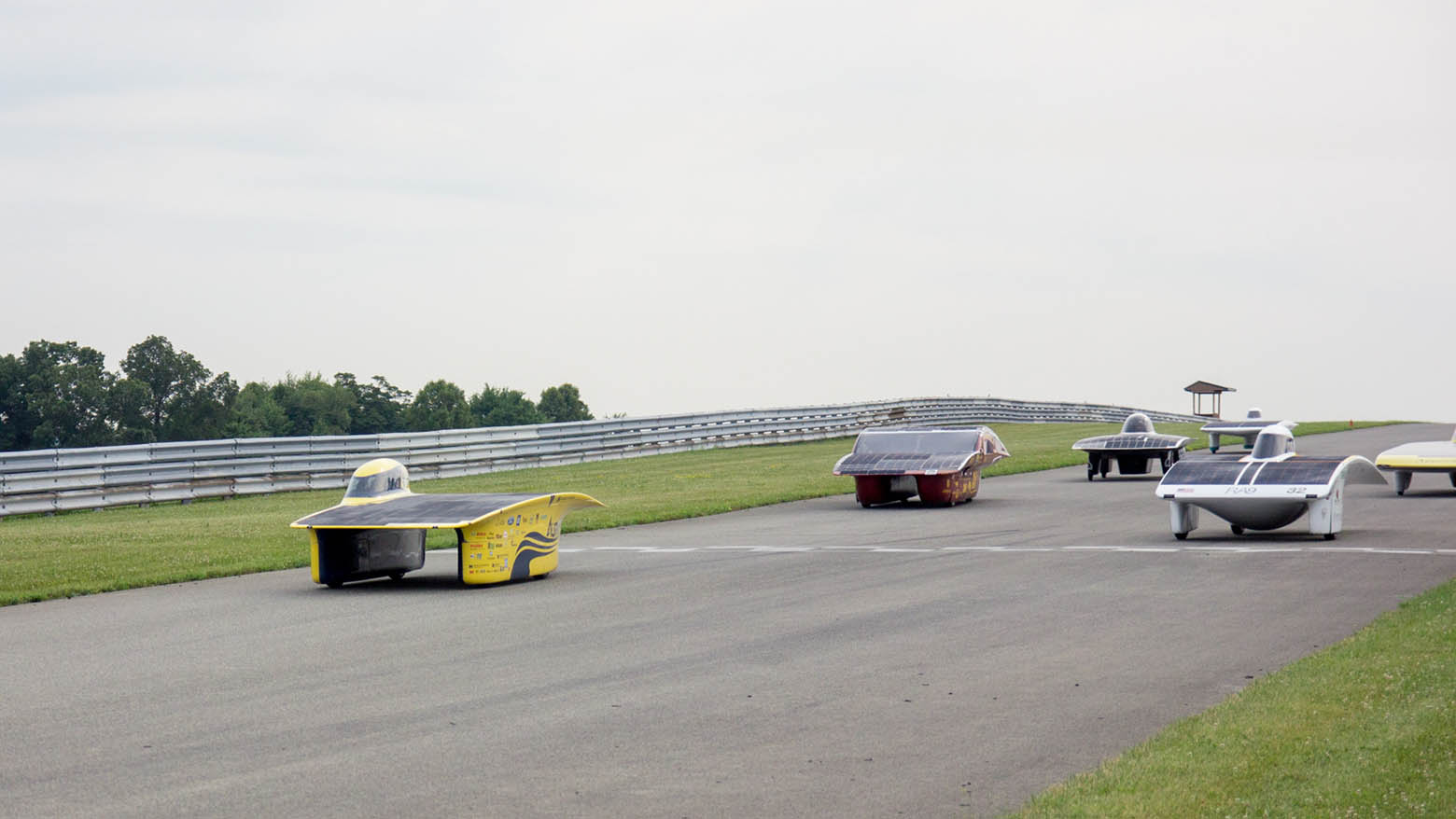 The team crossed the finish line at 5:30 PM ET today in Wind Cave National Park in South Dakota. The race, which happens every other year on a different course, began in Ohio on July 30. Michigan raced against 23 other teams of college students that had built their own solar-powered electric vehicles. This is the ninth time that U-M has won the race.

Before the race began the young team (half rising sophomores) knew they would have to overcome a daily six (by 8) minute penalty. Their car, Aurum, was designed for the World Solar Challenge in Australia and didn’t quite meet the American race regulations. This setback accumulated to a 48 minute penalty over the course of the eight-day 1,975 mile race.

To prepare, the team ran two mock races. The students took Aurum through Michigan’s lower peninsula, and also along the full length of the actual race route. 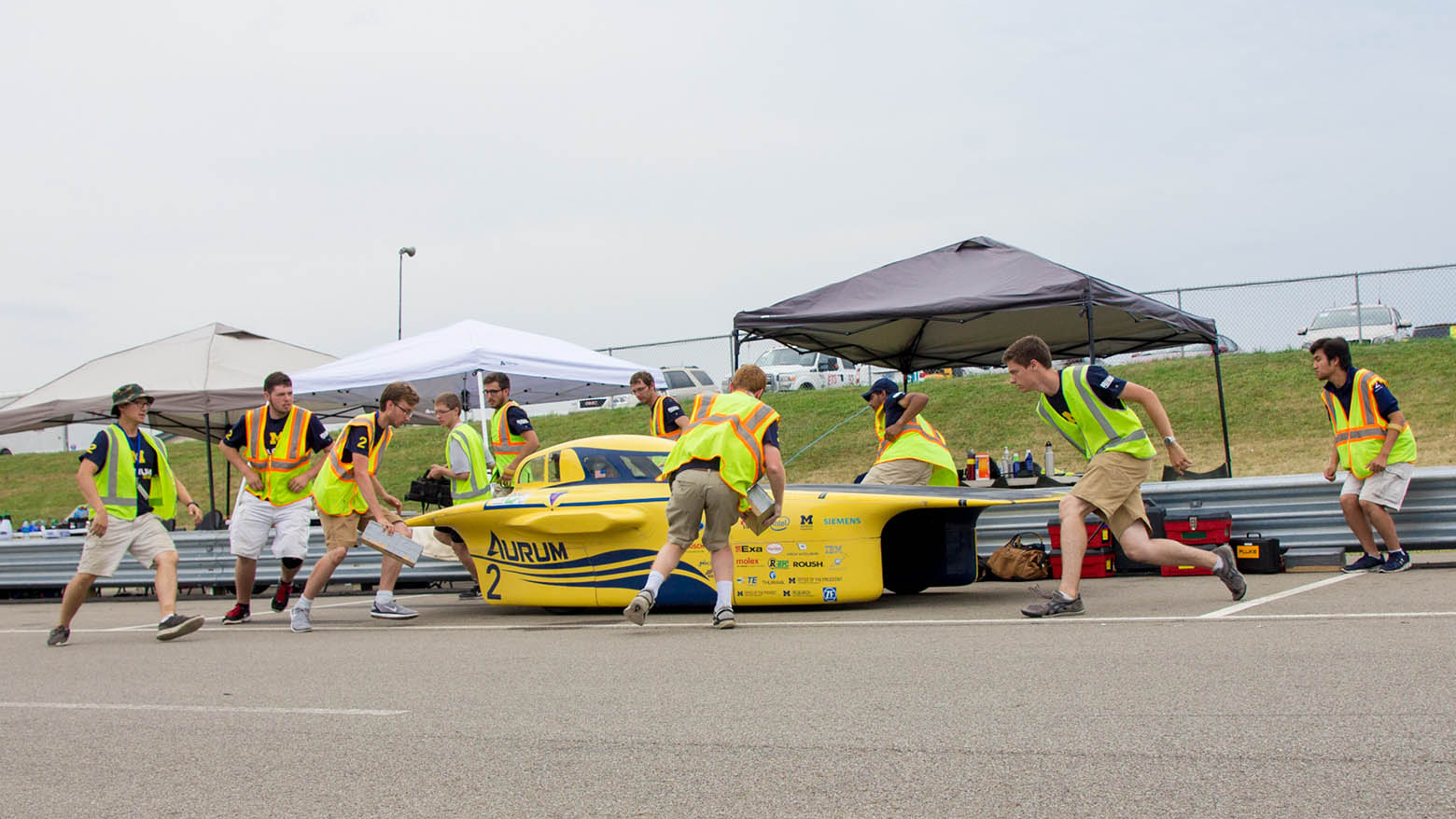 Aurum began making up for the daily penalty in the pre-race seeding event by completing the most laps on the track and posting the fastest lap time. Aurum secured the top seed placement for the beginning of the long race ahead. The team continued that momentum, leading the pack through the first three stages. They finished 3rd in the final stage, but a cumulative lead of nearly 10 hours gave them the win.

Even with the lead, it wasn’t an easy victory.

“There’s been very little to no sun yesterday and today, so the teams are moving pretty slowly towards the finish,” said Sarah Zoellick, business director and sophomore in business administration, about two hours before they crossed the finish line.

As all the teams creeped towards to the checkered line, other teams started to run out of solar power. They hauled their vehicles back in trailers. 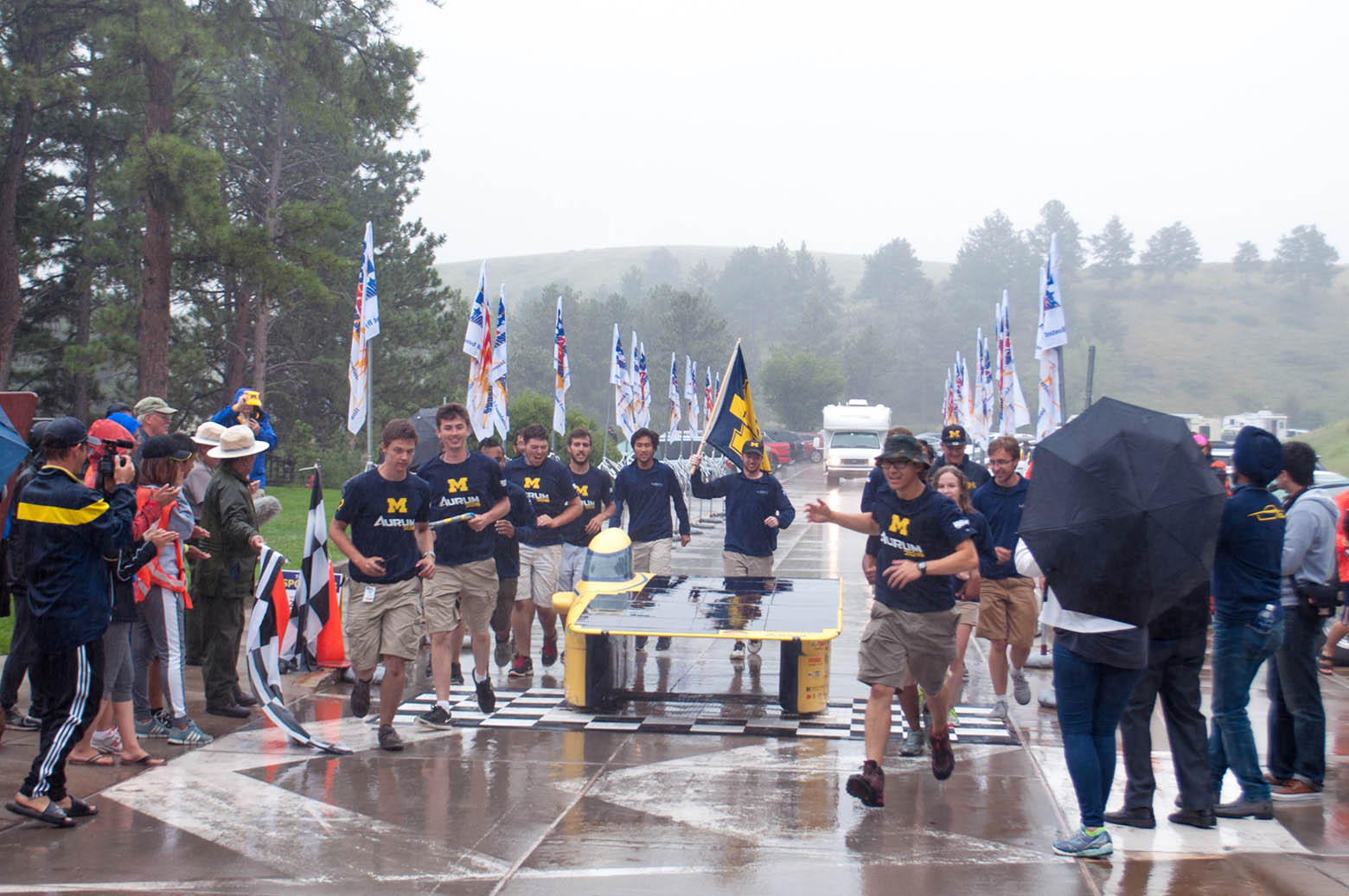 “We were worried about physically getting to the finish,” said Shihaab Punia, team leader and junior in computer engineering. “Out of all the teams, we were the only ones that went entire race on solar power alone.”

Punia believes this race will go down in U-M solar car history. “We always talk about some of the great races in the past. To be part of one that’s been different—to have a completely sunless last two days of the race—to go through something unique, it’s going to add the legacy of Michigan Solar car. Incoming team members this fall, two years, even three years from now, will be hearing about this race.”

Punia and Zoellick credit their young team’s hard work in the weeks prior for making this feat possible. While nearly 20 students were on the American Solar Challenge race crew, the team is made up of more than 100 students from across campus. The team has a 26-year history including eight previous championships in the American Solar Challenge, and five international third-place finishes in the World Solar Challenge. Major sponsors include Altair, Ford, General Motors, IMRA, Michigan Engineering, Intel and Siemens PLM Software. 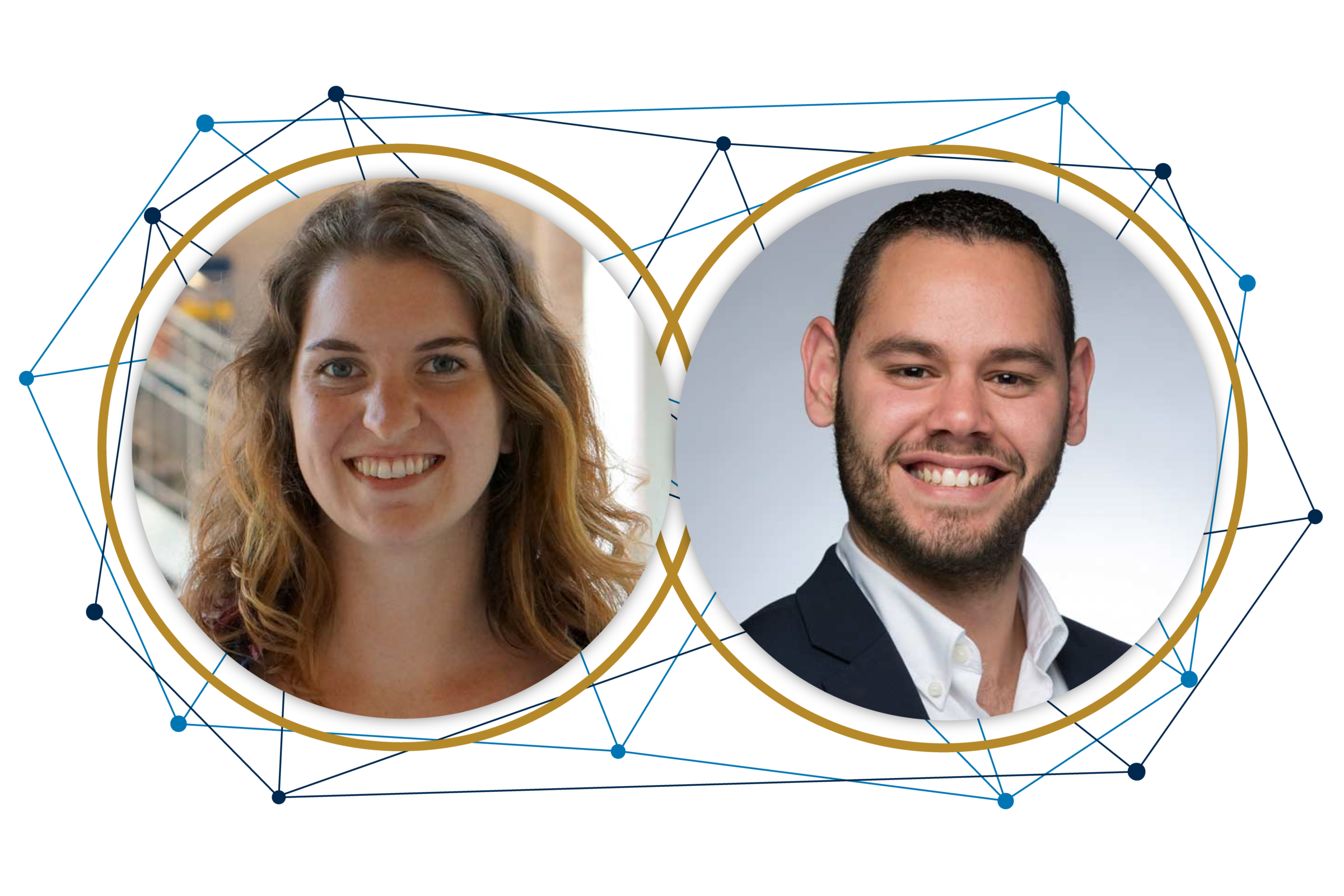 At the recent INFORMS Annual Meeting, the U-M INFORMS student chapter and U-M IOE PhD student, Wesley J. Marrero, were recognized for their work in operations research and the management sciences.| Short Read 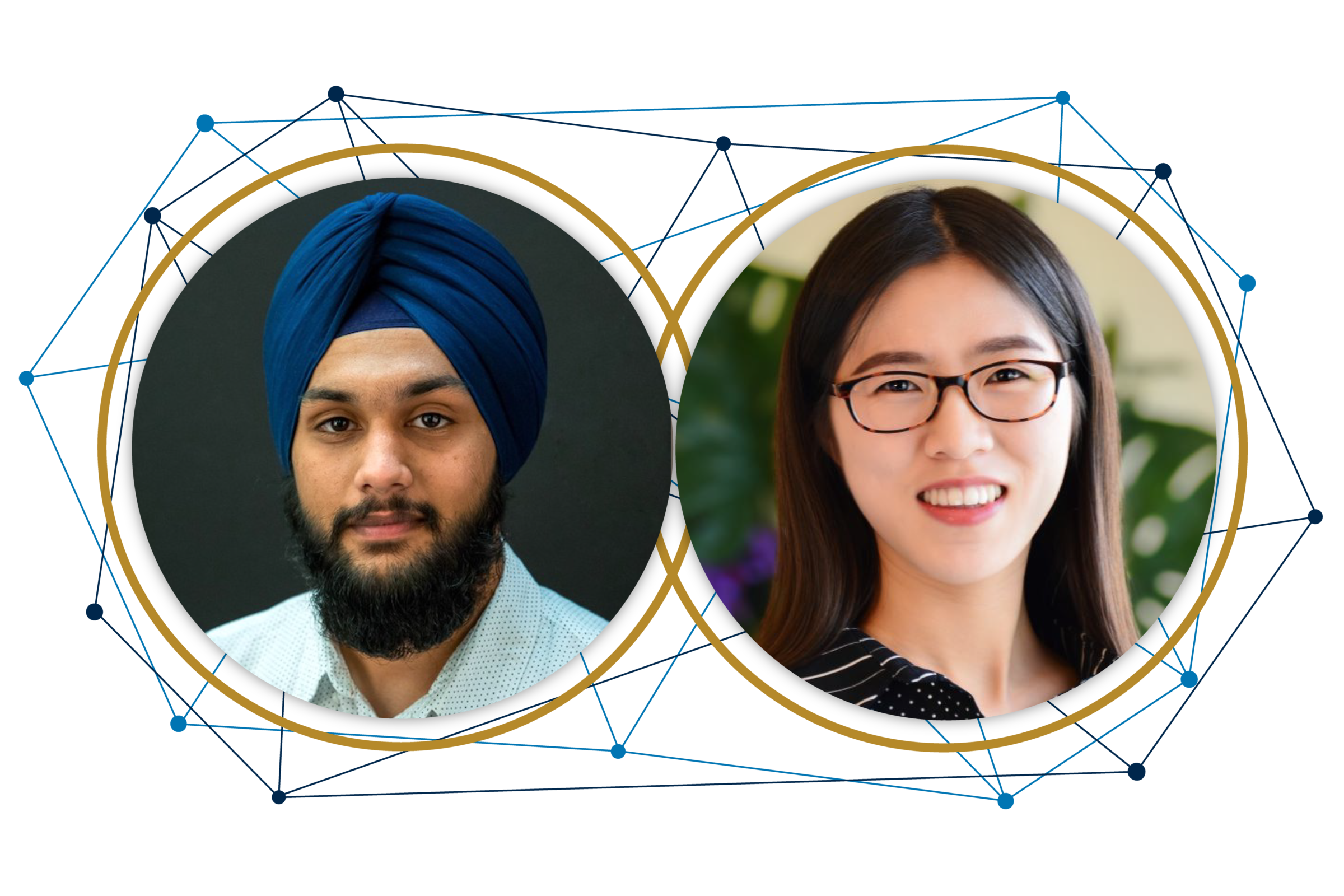