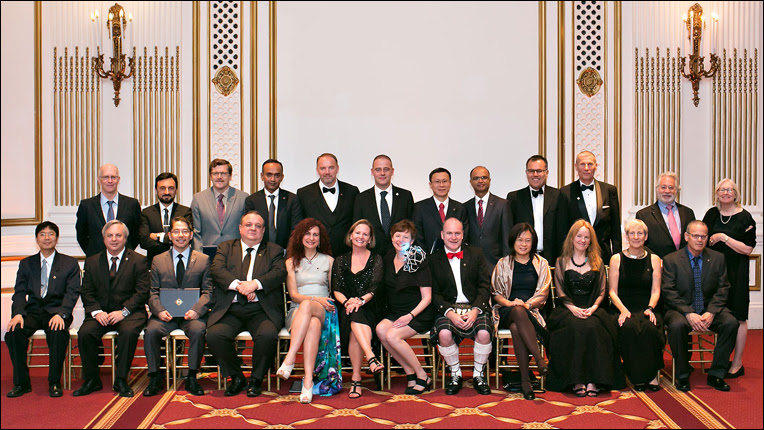 IMAGE:  The 2015 ACM Fellows at the Awards Banquet. Prof. Radev is pictured in the front row, fourth from the left.

Prof. Dragomir Radev was honored as an ACM Fellow at the annual ACM Awards Banquet, which took place June 11th in San Francisco, CA. The ACM Awards honors those whose contributions have impacted our world for the better in countless ways.

ACM has recognized 42 of its members for their significant contributions to the development and application of computing in areas from data management and spoken-language processing to robotics and cryptography.

Prof. Radev was elected a Fellow for “contributions to natural language processing and computational linguistics.” He is a leader in the field of computational linguistics, which leverages techniques from computer science and linguistics and is concerned with the computational aspects of the human language faculty. His research takes place at the intersection of information retrieval, natural language processing, machine learning, bioinformatics, text and data mining, social networks, social media, collective behavior, text generation, information extraction, and artificial intelligence.

Click here for more information about Prof. Radev being named a 2015 ACM Fellow.

The ACM Fellows Program was established in 1993 to recognize and honor outstanding ACM members for their achievements in computer science and information technology and for their significant contributions to the mission of the ACM. The ACM Fellows serve as distinguished colleagues to whom the ACM and its members look for guidance and leadership as the world of information technology evolves.

The award highlights Kasikci as an emerging leader in the design of efficient and trustworthy computer systems.| Short Read

The grant recognizes recently appointed faculty whose research interests and accomplishments seem poised to have significant impact within the industry and academia.| Short Read
Researchers