The Michigan Hybrid Racing (MHybrid) team took their latest creation to the Formula Hybrid Competition at the New Hampshire Motor Speedway in May, led in part by ECE seniors Gwynn Cunningham (team captain), Vicky Cheung, Jake Moline, Jeffrey Lu, and Guanlun He. This was a tough year, and the team didn’t pass all the necessary inspections for entry in the races. Nevertheless, MHybrid team members took away memorable experiences and have turned a positive eye toward the future – with graduates anticipating new careers.

The Formula Hybrid Competition, sponsored by Dartmouth University, seeks to give students a racing fix while working to improve fuel efficiency. Entrants are faced with multiple tests and inspections before they can get out on the track, and most years only about half a dozen teams make the cut. Inspections include pre-electrical, mechanical, full electrical, tilt tests, brake tests, and noise tests.

This year, the MHybrid team was stopped by the full electrical and brake tests. 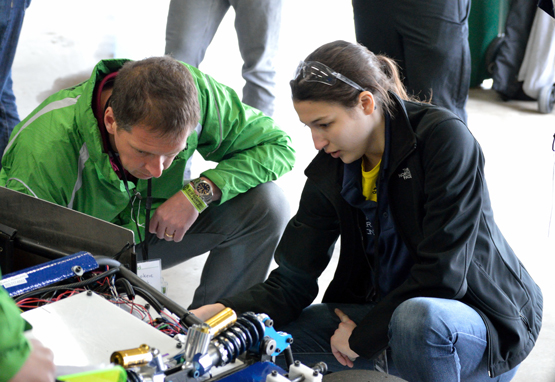 “The results were disappointing, but I was incredibly happy with how well the team performed,” says Jake Moline, who worked on the EV Powertrain team. “That week at competition we worked better as a team than I’d seen in my four years. We were very motivated to get that car fixed. As a team we performed very well, but we didn’t have enough time to get it done.”

The EV division worked for over 24 hours in shifts trying to figure out one pesky electrical issue. After they figured out it was a problem with the battery management system, Jake and Maggie Hayes (CE) sat down and managed to fix the issue at the competition.

Jake was particularly proud of the work done by younger members of the team on the first day of the competition while seniors stayed back to attend commencement. Teams that arrived early that day had the chance to get through the pre-electrical inspection ahead of time, and the young MHybrid members made the cut (with a few phone calls to the seniors back home).

“It was cool for us to know our mentoring paid off,” says Jake. “It was good to give them confidence for next year.”

Next year’s team members have taken the competition results in stride, and have already begun brainstorming efforts for a new season. 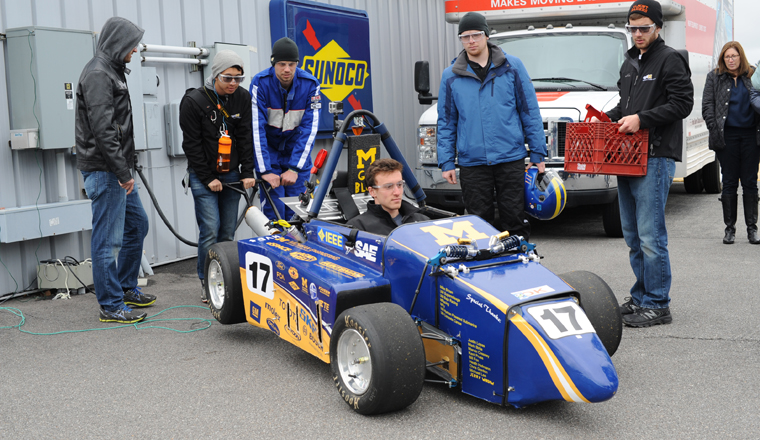 The graduating members look forward to applying skills from their major and their MHybrid experience to industry jobs.

Jake will be working at Ford starting in July, on a four year rotational position in different departments around the company. One of his first assignments will be in the electrical division, where he’ll apply some familiar skills on a much bigger scale. Jeffrey Lu and Guanlun He will both be working at GM.

Vicky Cheung, this year’s EV division lead and a graduating EE major, will be working for Boeing in California. She’ll be doing lab work, specifically failure analysis of electrical components from Boeing planes.

“I definitely think being on Hybrid helped me to get a job,” Vicky says. “It gave me a lot of first hand experiences to talk about during my interview with Boeing and at Career Fair. I know Boeing liked all of the hands-on experience I gained from the team, my experiences of working on a team, and the passion that I had for it.”