EECS: Electrical and Computer Engineering
May 19, 2016
The device resembles a swaddling hammock and features a heating pad charged by thermoelectrics, allowing users to light candles beneath the cells to generate power.| Short Read
Enlarge 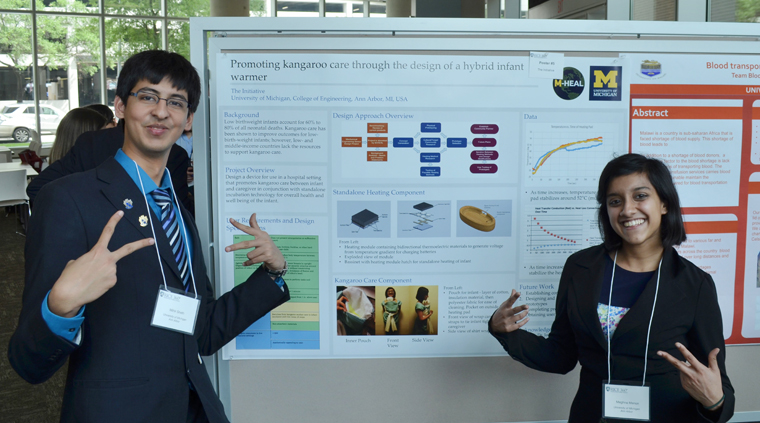 IMAGE:  Mihir Sheth and Meghna Menon present their concept for an infant warmer that promotes kangaroo care at the Rice 360 Design Competition.

The pair recently traveled with four other team members to compete in Rice University’s Rice 360 Design Competition. Rice 360 hosts international student teams who present low-cost global health technologies to judges from industry, medicine, and academia. Meghna and Mihir are now researching ways to deploy their device in several regions around the world.

Led by Meghna, the project team built a prototype hybrid infant warmer that serves as both a standalone incubator and designed clothing that supports “kangaroo care.” Kangaroo care is skin-to-skin contact between an infant and a caregiver, and has recently been the subject of study by both the World Health Organization and USAID, the lead U.S. government agency working to end extreme global poverty. Low birthrate infants account for 60% to 80% of all neonatal deaths.Kangaroo care has been shown to improve outcomes for low-birth-weight infants, yet many countries lack the resources to support kangaroo care.

“We felt that if a device that promoted kangaroo care also had a standalone incubation capability, then this could be a better way to introduce the concept to people around the world,” Meghna explains. However, many cultures do not have access to stable electricity, which are needed to warm the incubators.

The team’s device resembles a swaddling hammock that can be removed from a stand. It features a heating pad charged by thermoelectrics, allowing users to light candles beneath the cells to generate power. The hammock portion is designed such that the caretaker can wear it as a front-pack, with the infant held against their chest. This allows for skin-to-skin contact when it’s removed from the incubator.

This design was chosen from three initial concepts, after they had the chance to prototype them all at the U-M Makeathon in January. The project team is now engaged in ongoing research with the School of Nursing to define possible regions of interest where this device could be deployed.

“We worked with Dr. Jody Lori, and she essentially told us that the problem of keeping low birth weight infants warm is prevalent all around the world,” Meghna says.

Preliminary countries being considered for trials are Ethiopia, Ghana, and India, where they could take advantage of U-M’s existing relationships with regional universities and organizations.

M-HEAL provided the perfect outlet for Meghna and Mihir’s goals.

“What drew me to M-HEAL over other groups is their global focus,” says Meghna. “This group is unique in that we are working to help people rather than focusing on the next best thing.”

“A friend working as a doctor told me that he hopes to see more biomedical devices that are effective, sustainable, and friendly,” says Mihir. “I came back to Michigan looking to get involved in that biomedical device space, and M-HEAL was the best way to do it.”