by Nicole Casal Moore
Michigan Engineering
April 26, 2016
A single U.S. shale oil field is responsible for much of the past decade’s increase in global atmospheric levels of ethane, a gas that can damage air quality and impact climate.| Medium Read
A simulation of how Bakken oil field hydrocarbon emissions including ethane affected North American ground-level ozone concentrations in July and August 2014.

A single U.S. shale oil field is responsible for much of the past decade’s increase in global atmospheric levels of ethane, a gas that can damage air quality and impact climate, according to new study led by the University of Michigan.

The researchers found that the Bakken Formation, an oil and gas field in North Dakota and Montana, is emitting roughly 2 percent of the globe’s ethane. That’s about 250,000 tons per year. 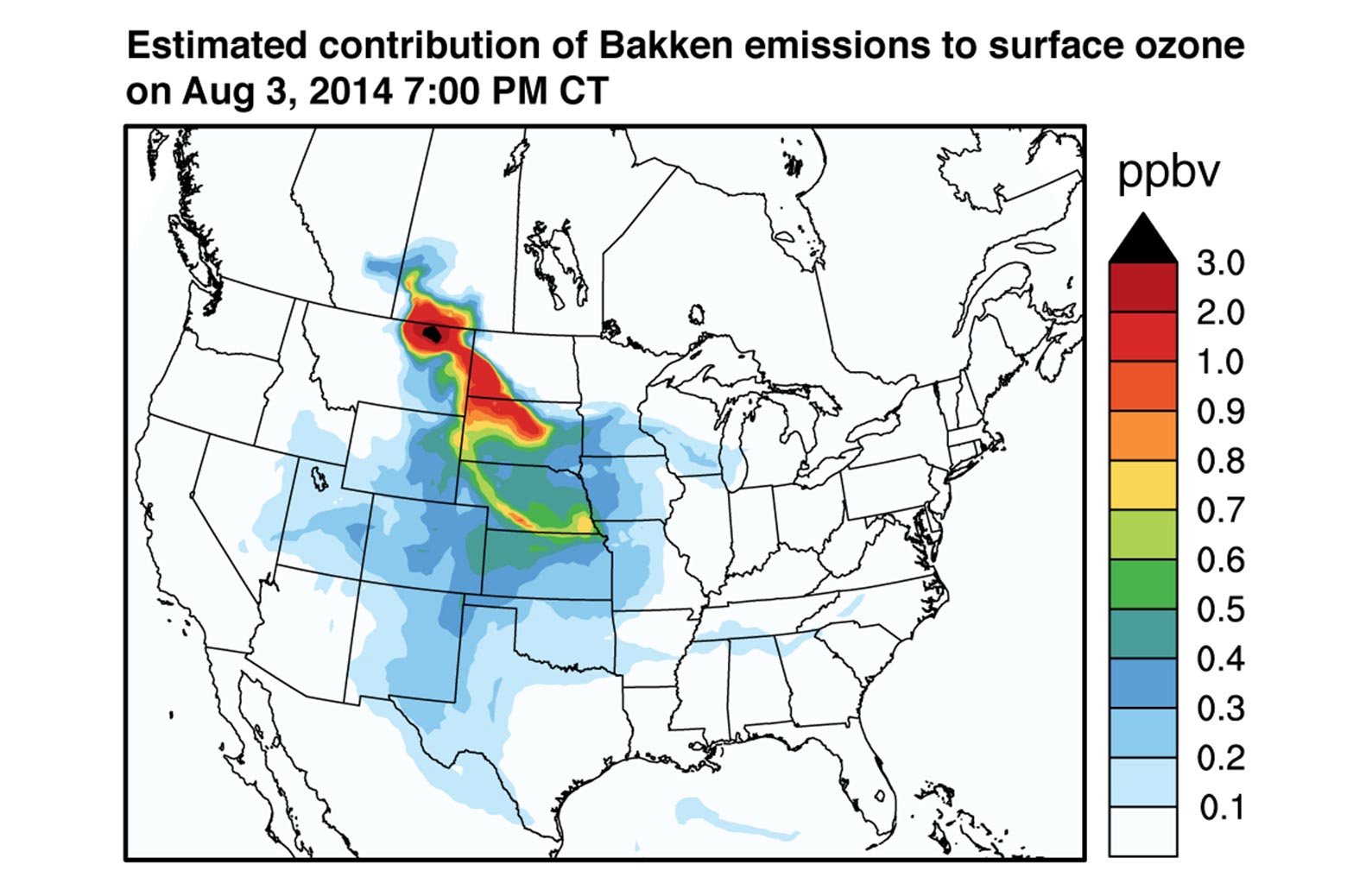 IMAGE:  A snapshot from a simulation of how Bakken oil field hydrocarbon emissions including ethane affect North American ground-level ozone concentrations. Hydrocarbons react with nitrogen oxides (NOx) and sunlight to produce ozone. Ground-level ozone leads to poor air quality. This snapshot represents one hour during the summer of 2014 in an air quality model. The reddish hues directly over and downwind of the Bakken show that emissions there accounted for increases of up to 4 ozone molecules per billion air molecules, about 6 percent of the present EPA standard. The colors don't indicate that any particular location necessarily experienced an unhealthy air day, but they do show where Bakken emissions had the greatest impacts. Credit: Lee Murray, NASA GISS/Columbia University

“Two percent might not sound like a lot, but the emissions we observed in this single region are 10 to 100 times larger than reported in inventories. They directly impact air quality across North America. And they’re sufficient to explain much of the global shift in ethane concentrations,” said Eric Kort, assistant professor of climate and space sciences and engineering at U-M and first author of the paper, published today in Geophysical Research Letters.

The Bakken is part of a 200,000-square-mile basin that underlies parts of Saskatchewan and Manitoba in addition to the two U.S. states. It saw a steep increase in oil and gas activity over the past decade, powered by advances in hydraulic fracturing, or fracking, and horizontal drilling. Between 2005 and 2014, the Bakken’s oil production jumped by a factor of 3,500, and its gas production by 180. In the past two years, however, production has plateaued.

Ethane is the second most abundant atmospheric hydrocarbon, a family of compounds made of hydrogen and carbon. Ethane reacts with sunlight and other molecules in the atmosphere to form ozone, which at the surface can cause respiratory problems, eye irritation and other ailments and damage crops. Surface-level ozone is one of the main pollutants that the national Air Quality Index measures in its effort to let the public know when breathing outside for long periods of time could be harmful. Low-altitude ozone also plays a role in climate change, as it is a greenhouse gas and the third largest contributor to human-caused global warming after carbon dioxide and methane.

Globally, the atmosphere’s ethane levels were on the downswing from 1984 to 2009. The gas gets into the air primarily through leaks in fossil fuel extraction, processing and distribution. Scientists attributed its declining levels to less venting and flaring of gas from oil fields and less leakage from production and distribution systems. 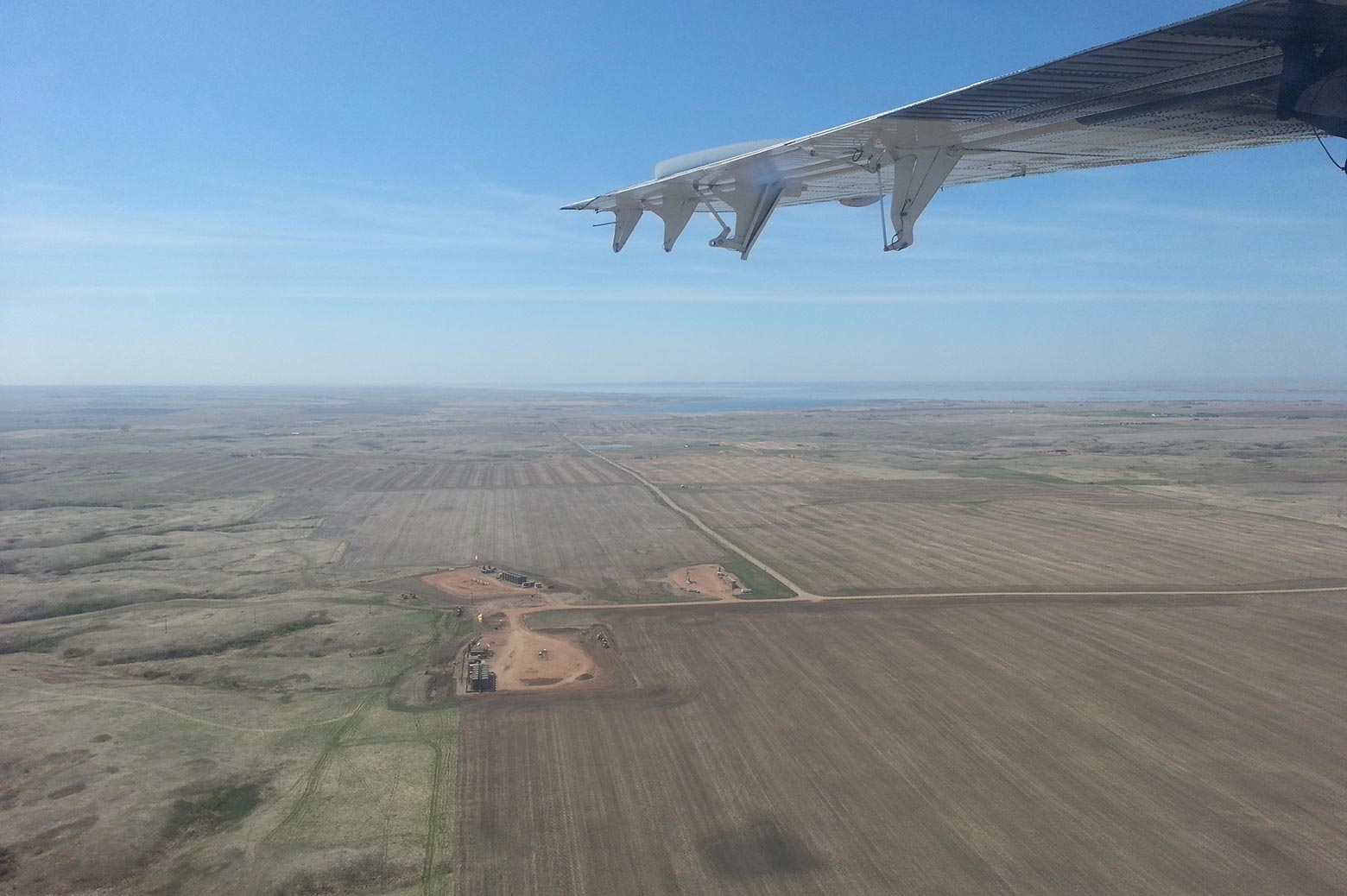 IMAGE:  Researchers flew over the Bakken oil field in North Dakota and Montana to gather data about emissions of ethane, a hydrocarbon gas that can damage air quality and impact climate. This is the view from their NOAA Twin Otter aircraft. Credit: Eric Kort

But in 2010, a mountaintop sensor in Europe registered an ethane uptick. Researchers looked into it. They hypothesized that the boom in US oil and gas brought about by hydraulic fracturing could be the culprit – even a continent away. Ethane concentrations have been increasing ever since.

To gather their data, the researchers flew over the Bakken Formation in a NOAA Twin Otter aircraft, sampling air for 12 days in May 2014. Their airborne measurements from directly over and downwind of oil production areas show  that the field’s ethane emissions of 0.23 teragrams per year, or roughly 250,000 US tons, effectively cancel out half of the global decline rate.

“These findings not only solve an atmospheric mystery—where that extra ethane was coming from—they also help us understand how regional activities sometimes have global impacts,” said co-author Colm Sweeney, a scientist with the Cooperative Institute for Research in Environmental Sciences at the University of Colorado Boulder, and NOAA. “We did not expect a single oil field to affect global levels of this gas.”

Ethane emissions from other U.S. fields, especially the Eagle Ford in Texas, likely contributed as well, the research team says. The findings illustrate the key role of shale oil and gas production in rising ethane levels.

Take a multimedia trip to the Amazon and meet the researchers who are working to understand how the future of the rainforest could affect us all.| Short Read
Researchers
In the News
The Washington PostApr 28, 2016
The U.S. oil and gas boom is having global atmospheric consequences, scientists suggest
Associated PressApr 19, 2016
Study: US oil field source of global uptick in air pollution