EECS: Electrical and Computer Engineering
April 7, 2016
Clark proposed framing the issue of collecting data from a network of different sensors as an optimization problem, making a solution easier to formulate for different systems. | Short Read
Enlarge 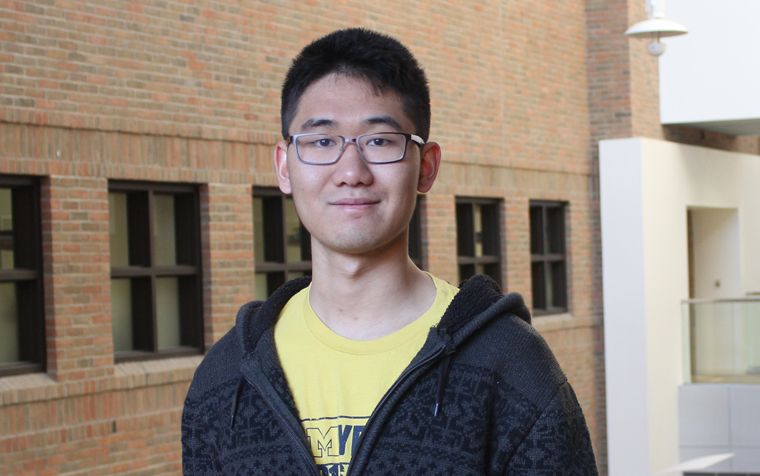 Clark Zhang, a senior in Computer Engineering, has earned an NSF Graduate Research Fellowship for his research proposal on gathering useful data from MEMS sensor systems.

Often, collecting data from a network of different sensors can be a long process. A unique set of data filters has to be designed for different sensor systems to decide what information is gathered – a process that is not very standardized or methodical. Clark proposed framing this issue as an optimization problem, expressing the characteristics of the system as constraints that an optimizer can run automatically, making a solution easier to formulate for different systems.

As an undergrad, Clark was a part of the Michigan Autonomous Aerial Vehicles (MAAV) team, working with the controls subgroup. He held a variety of internships, including a software position at Thomson Reuters and micro-architecture verification at Intel.

Most recently, he took a semester off to work at a drone technology startup called Vayu. This company develops drones to solve the problem of healthcare delivery in undeveloped nations. Clark filled many roles at the small company, spanning work in controls, computer vision, programming, IT, and more.

Clark has not yet decided where he’ll be attending grad school, but has plans lined up for the coming summer. After a vacation to Japan, he’ll be working as an intern at NASA’s Jet Propulsion Laboratory. There, he’ll be a part of a project called Resilient Spacecraft Architecture, which works to make the autonomous systems on spacecraft more robust  and willing to take risks without an operator intervening.

The National Science Foundation’s Graduate Research Fellowship Program (GRFP) helps ensure the vitality of the human resource base of science and engineering in the United States and reinforces its diversity. The program recognizes and supports outstanding graduate students in NSF-supported science, technology, engineering, and mathematics disciplines who are pursuing research-based master’s and doctoral degrees at accredited United States institutions.