by Kate McAlpine
Michigan Engineering
March 2, 2016
The new design, under development at Michigan, should be smaller and able to achieve higher resolutions than current 3D cameras.| Medium Read
Enlarge 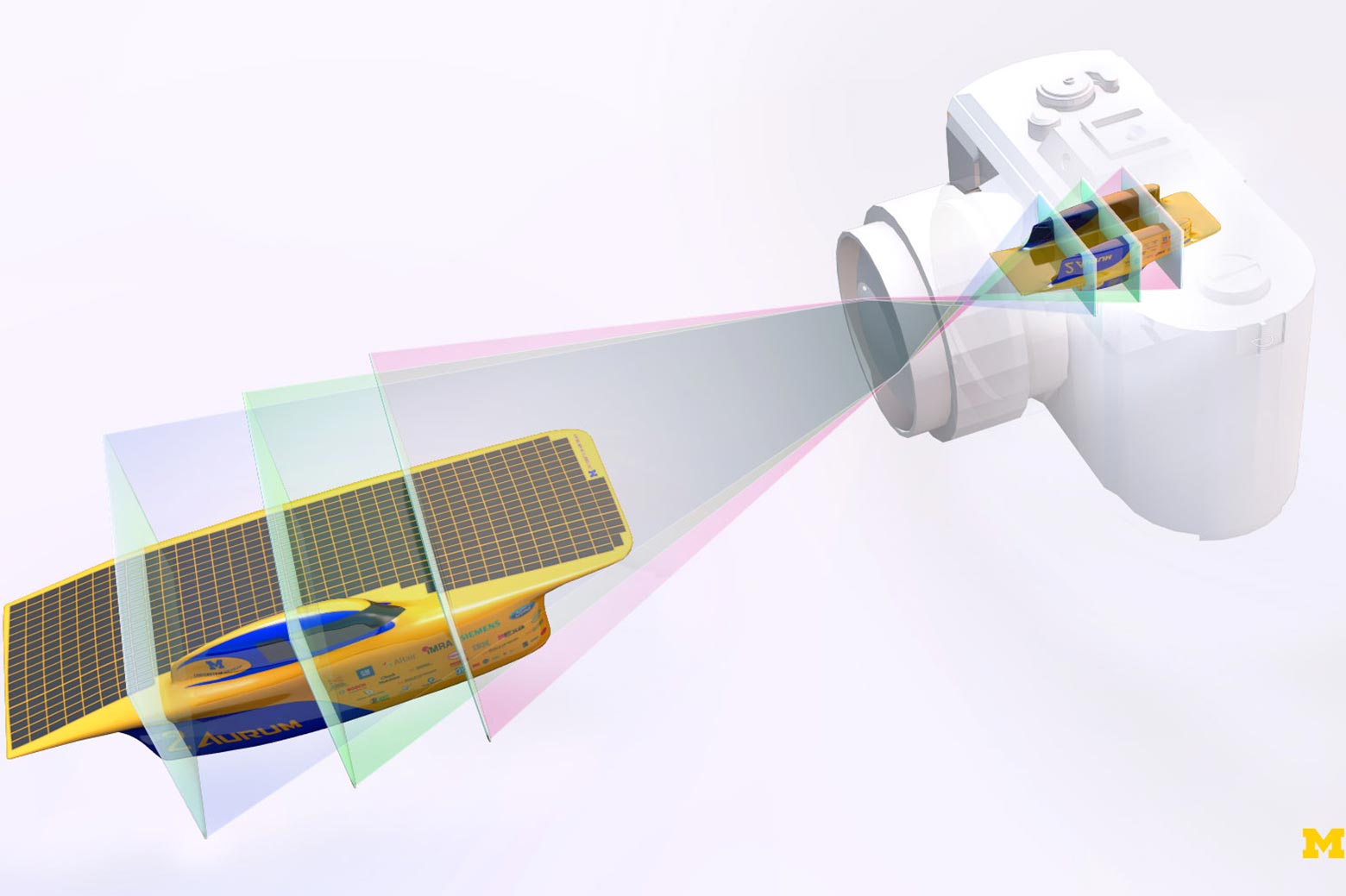 IMAGE:  An illustration of the 3D camera recording an image of the U-M solar car, showing how different parts of the car come into focus on different detectors. Credit: Steve Alvey

A camera that can record 3D images and video is under development at the University of Michigan, with $1.2 million in funding from the W.M. Keck Foundation. While other 3D cameras are currently on the market, the new design should be smaller and able to achieve higher resolutions.

3D cameras are useful for a variety of applications including 3D movie filming and, eventually, virtual reality. While 3D films are currently made using multiple cameras to reconstruct each frame, this new type of camera could record in 3D on its own. Images and video recorded by 3D cameras might one day be projected as holograms – although projection is a different challenge entirely.

In photography, 3D images enable users to decide the depth of focus after taking the photograph. Attached to microscopes, a 3D camera can image cells and tissues for more accurate analysis of biopsies and medical cultures, as well as for fundamental research. 3D video recording could give robots depth perception and eventually lead to a bionic eye.

“When the light hits the detector inside a camera, it can come from different directions, and this spatial information can be used to reconstruct 3D images,” said Zhaohui Zhong, an associate professor of electrical engineering and computer science.

“Normally, that information is lost because the detector only measures intensity,” he added, which is why 3D images made with traditional recording methods must be constructed from multiple shots.

One-shot 3D cameras available now rely on a micro-lens array to divert the light after it has been focused by the main lens. This array of smaller lenses essentially tears up the picture to recover the directional information from the rays of light, and then the camera’s software reconstructs the image along with the depth information.

The design to be developed by Zhong, Theodore Norris, the Gérard A. Mourou Professor of Electrical Engineering and Computer Science (EECS), and Jeffrey Fessler, a professor of EECS, does away with the micro-lens array. Instead, their camera will record the light as it passes through a series of transparent light detectors.

“The microlens approach involves an inherent trade-off between resolution and the ability to refocus or resolve depth. Our stack approach enables more information to be acquired without losing image resolution,” said Norris.

This method works because objects at different distances from the lens will come into focus at different points inside the camera. Objects will appear brightest where they are most in focus. Using this principle, it is much easier for the computer to reconstruct the images. The faster processing makes it possible to produce high speed and high-resolution video.

The concept is simple, but the challenge is making those transparent light detectors. Typically, the detector needs to absorb as much light as possible to give the most detailed image. However, a material called graphene, which is a single layer of carbon atoms, can be fashioned into a highly sensitive light detector that allows much of the light to pass through.

“Ordinarily, you want the light detector to absorb as much light as possible for high sensitivity, to produce a clearer picture,” said Zhong. “Graphene detectors can offer very high sensitivity, so you don’t really sacrifice the clarity by making them transparent.”

The team is considering an SLR-sized camera to begin with, but Norris thinks it may be possible to squeeze 3D camera capability into a smartphone.