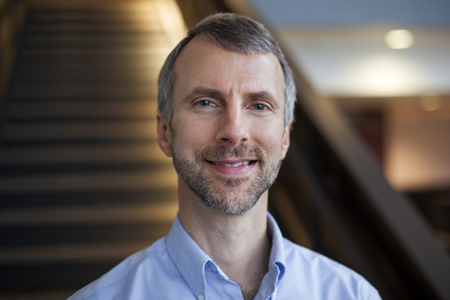 Jeff is one of the most accomplished researchers of medical image reconstruction in the world. His group has produced breakthroughs in Magnetic Resonance Imaging (MRI), X-ray Computed Tomography (X-ray CT), and radionuclide imaging (PET/SPECT). His group’s findings have helped make these technologies faster, and therefore safer and more cost effective, without sacrificing their image quality. He holds eight patents, and his research has been implemented in commercial products. 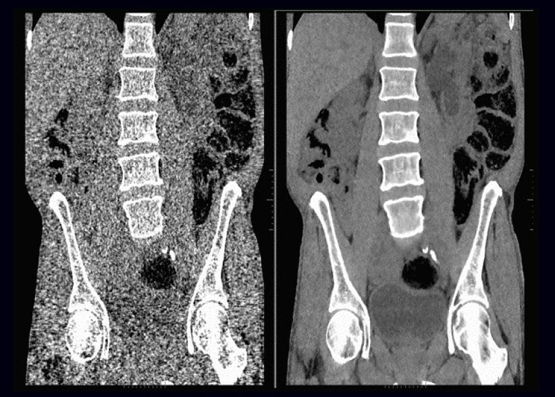 One unusual aspect of Prof. Fessler’s research is its transparency. Jeff was one of the pioneers in open research, making his data and code, and even a textbook that is perpetually updated and never finished, widely available to the public. By doing so, other researchers can more easily build on his research, ultimately leading to better healthcare for all.

Jeff’s research work has been utilized in a major medical scanner called Veo, manufactured by General Electric and introduced at the University of Michigan hospital in 2012. U-M’s hospital was the first teaching hospital in North America to institute Veo, a new clinical technology that allows CT scans to be performed using a significantly lower dose of radiation than a conventional scan. Veo is not a new type of machine, but a new way of processing data. Using a technique called Model-based Iterative Reconstruction (MBIR), the technology employs sophisticated algorithms to squeeze more information out of the existing X-ray data.

In one of his recent projects, Jeff’s group is using data science to achieve ultra-low dose CT image reconstruction in collaboration with Prof. Yong Long (PhD EE:Systems ’11) of the University of Michigan-Shanghai Jiao Tong University (UM-SJTU). They plan to develop a dramatically improved approach to low-dose X-ray CT image formation by extracting and using information from a big-data corpus of regular dose X-Ray CT images.

Prof. Fessler’s research is highly cited in the research world, with over 350 publications in the most competitive journals and conferences of medical imaging, signal processing, information theory, and nuclear science. Twenty seven of these papers have been cited over 100 times according to Google Scholar, and twelve have won awards from leading journals and conferences. His research has been continuously supported by a diverse array of public and private sources, including the National Institute of Health (NIH), the National Science Foundation (NSF), DARPA, the Department of Energy, and GE.

Jeff is highly regarded as an educator. He teaches both large 100-level courses and more specialized 500-level courses in signal processing, and is a favorite among students. He has played a key role in introducing signal and image processing courses into the EECS curriculum, and his role in refining a course in medical imaging systems resulted in a teaching award from the Department of Biomedical Engineering. Additional teaching awards include the U-M Henry Russel Award, the CoE Education Excellence Award, and the Rackham Distinguished Graduate Mentor Award. He has graduated 52 Ph.D. students.

In addition to his achievements in research and teaching, he has made lasting positive impact through his administrative service at Michigan and in the professional community. He has served as Associate Chair of the ECE division, Signal Processing Area Chair, Chair of the CoE Curriculum Committee, and member of the Rackham Graduate School Executive Board. He has also been active on, and chaired, committees within the IEEE Signal Processing Society, the IEEE Nuclear and Plasma Physics Society, the IEEE Engineering in Medicine and Biology Society, and other organizations. Jeff has served as associate editor of four of the leading IEEE journals in image processing: IEEE Transactions on Computational Imaging, IEEE Transactions on Image Processing, IEEE Signal Processing Letters, and IEEE Transactions on Medical Imaging. He was co-chair of the 1997 SPIE conference on Image Reconstruction and Restoration, and general chair of the 2007 IEEE International Symposium on Biomedical Imaging.

Prof. Fessler has received numerous awards, including the Edward J. Hoffman Medical Imaging Scientist Award, “for contributions to the theory and application of statistical image reconstruction methods in nuclear medicine, X-ray CT, and magnetic resonance imaging.” He is an IEEE Fellow.

Prof. Root received his bachelor’s degree from Iowa State University in 1940 and master’s and doctoral degrees from Massachusetts Institute of Technology in electrical engineering and mathematics in 1943 and 1952, respectively. Before joining the University of Michigan in 1961, he was a leading researcher in the statistical theory of radio and radar signal detection at MIT’s Lincoln Laboratory. He co-authored the book,An Introduction to the Theory of Random Signal and Noise with Wilbur Davenport in 1958. This book became a classic on the theory of random signals and noise.

In 1961, Professor Root joined The University of Michigan faculty as a professor of aerospace engineering, and in 1986 he was named professor of electrical engineering and computer science. He was also a member of the interdisciplinary graduate program known at the time as Information and Control Engineering (later Computer, Information, and Control Engineering). He received the Claude E. Shannon Award from the IEEE Information Theory Society in 1986, and was an IEEE Fellow.