EECS: Electrical and Computer Engineering
March 11, 2016
Amr is investigating both the unique advantages and the performance limitations of radar systems operating at 240 GHz in typical outdoor environments.| Short Read
Enlarge 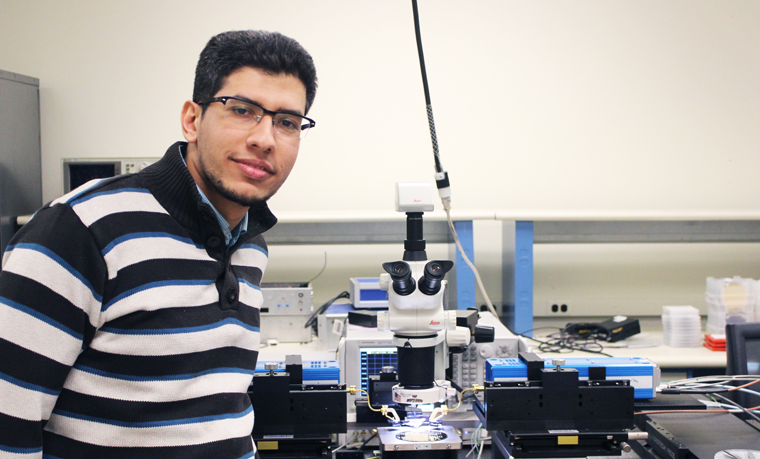 Amr Ibrahim, a PhD student in ECE, has been awarded a Rackham Pre-Doctoral Fellowship for his research with Prof. Kamal Sarabandi on high millimeter wave radar systems for imaging and navigation applications.

The increasing  demand on high-resolution imaging radars has pushed research into the high millimeter wave frequency range. Systems using this frequency range can be applied to autonomous navigation for cars and planes as well as detection of hidden objects such as illicit drugs and explosives. The resolution of these systems compares to that offered by optical imaging, but is not affected by adverse weather conditions and other interference.

Amr is investigating both the unique advantages and the performance limitations of radar systems operating at 240 GHz in typical outdoor environments. His three goals are to develop models of how electromagnetic waves are scattered in realistic environments, characterize different materials that make up targets in common radar environments, and develop microfabrication techniques to produce these radar systems in a compact, reliable way.

“People have already demonstrated commercial systems that work at 75GHz, so our 240GHz system could enhance resolution by three times, while reducing the size by nearly the same factor” Amr says. “It’s kind of an uncharted territory.”

Last year, Amr was part of a team that took an earlier version of this system into the field to test it in an actual outdoor environment.

Amr was the recipient of a Rackham International Student Fellowship and a Rackham Graduate Fellowship. His most recent paper on this work, “Experimental characterization of polarimetric radar backscatter response of distributed targets at high millimeter wave frequencies,” has appeared in IEEE Transactions on Geoscience and Remote Sensing.