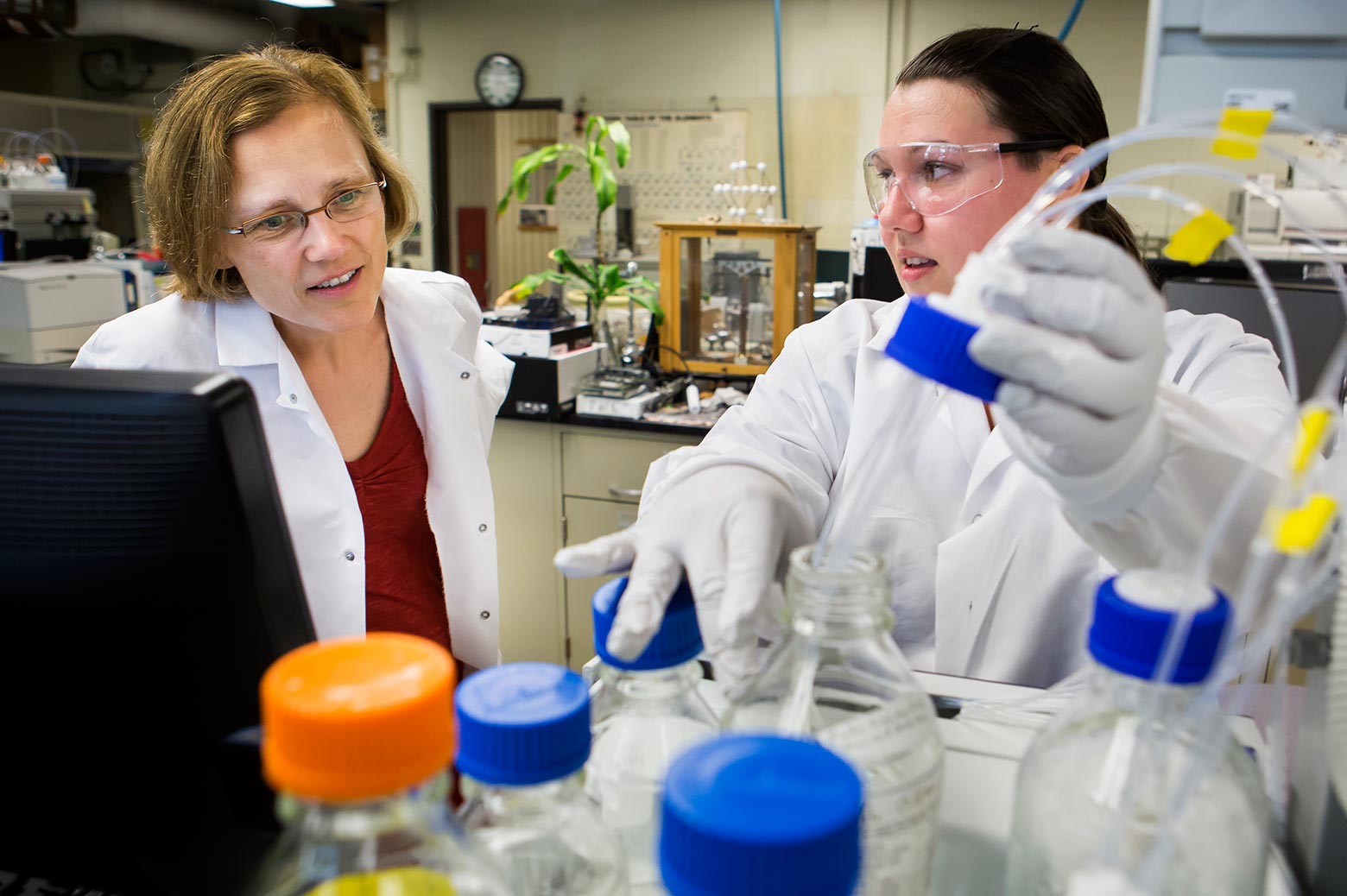 In 2014, a student from the University of Glasgow was completing her PhD dissertation research: studying drinking water treatment using microbial strategies. She caught the eye of Lutgarde Raskin, a professor of civil and environmental engineering at the University of Michigan.

Raskin knew the PhD student, Sarah Haig, was using approaches in her research that would directly apply to a project she was considering: could bacteria causing pulmonary infections in immunocompromised people be the result of exposure to opportunistic pathogens in their drinking water?

“I just knew Sarah was going to be great for this,” said Raskin, the Altarum/ERIM Russell D. O’Neal Professor of Engineering. “But I didn’t have a position to offer her.”

Since finding a postdoctoral or PhD position is more like applying for a job than applying for school, funding is often a critical decision-maker for applicants. Luckily, Raskin was able to offer Haig a pledge. Using discretionary funds from her endowed professorship position, Raskin could commit to pay Haig for a year of work, during which time they would find an appropriate fellowship program or grant for her to continue her research.

It worked. Haig joined Raskin’s U-M drinking water team, which also included PhD student Nadine Kotlarz, and landed a fellowship from the Alfred P. Sloan Foundation to study the Microbiology of the Built Environment. The team grew from there, joining forces with John LiPuma, James L. Wilson M.D. research professor, to study the link between these environmental pathogens and the infections in cystic fibrosis patients. They went on to land a grant from the Cystic Fibrosis Foundation.

“None of this would have been possible without the discretionary funds from my professorship position,” said Raskin. “It’s the perfect example of how just making one decision enabled by these funds can snowball into something greater.”

Leaders and Best start with funding

Discretionary funds are provided to all professors awarded a named professorship title, an honorific award bestowed to acknowledge contributions and leadership in the field. When a professorship is endowed through a gift, its annual dividends help cover a portion the faculty member’s salary and also provide an average of $40,000 of discretionary funding, according to Alec Gallimore, associate dean for academic affairs at the College of Engineering.

“That is tremendous,” said Gallimore, who is also an Arthur F. Thurnau Professor of Aerospace Engineering. “These resources can be used to cover travel expenses, seed funding for students and post-doctoral researchers, equipment that needs to be purchased or startup money for unfunded research.”

It’s also the key to getting and retaining top faculty. “We are recruiting professors this year who are top performers who absolutely will not come if we don’t have those professorships,” said Gallimore.

In fact, the amount and specialty of these professorships are often the deciding factor in whether or not a professor joins – or stays – at an institution. Often, other universities will use an endowed title to lure faculty away from their current position, so having enough quality professorships available is critical to retaining current faculty as well.

The same holds true for endowed student fellowships such as the one awarded to recruit Kotlarz. Those fellowships, which directly fund a graduate student, also give them options and the flexibility to pursue their own path, rather than being forced to sign on to a specific researcher’s lab. That’s key in recruiting as well, said Gallimore, as the top graduate students will typically take the position with the most options.

Targeting funds to make an impact

Both fellowships and professorships can be endowed by individuals, corporations, foundations or other sources, and can be directly targeted to areas of research or education. That ability to specialize was a key motivation for Robert C. Leland Jr. (BSE IndE ’58) and his wife Donna (BA Econ ’58), who recently created the Robert C. Leland Jr. and Donna D. Leland Professorship of Biomedical Engineering and Cardiovascular Medicine.

“We’ve always wanted to give back something to the College, and creating this professorship just made sense,” Robert said. “After talking to folks in the cardiovascular department where I’ve been seen as a patient, we thought if we created a situation where someone with the right knowledge and an engineering toolset teamed up with the medical school, we could really have an impact.”

Creating that impact not only through research, but also through the right people, is critical to an institution’s long-term success, said Gallimore. “Everything focuses around the people – without the right people, we won’t thrive as much as we could. Some elite private institutions have an edge on us in their ability to offer professorships – we currently have much more demand than supply. That is our competition and anything that supporters of U-M can do to help with that will help their alma mater fly.”

Designing opportunities to support innovative faculty is a top priority for the U-M College of Engineering’s transformational campaign currently underway. Find out more about supporting faculty through endowments in the Victors for Michigan campaign.