A showcase of student innovation

The most ambitious and intense class projects of students’ undergraduate careers are showcased each semester at Design Expo. More than 100 teams display the prototypes they’ve spent months designing and refining. Here’s a sampling from the December 2015 spate. While they vary among majors and departments, they all aim to make a difference in the world. 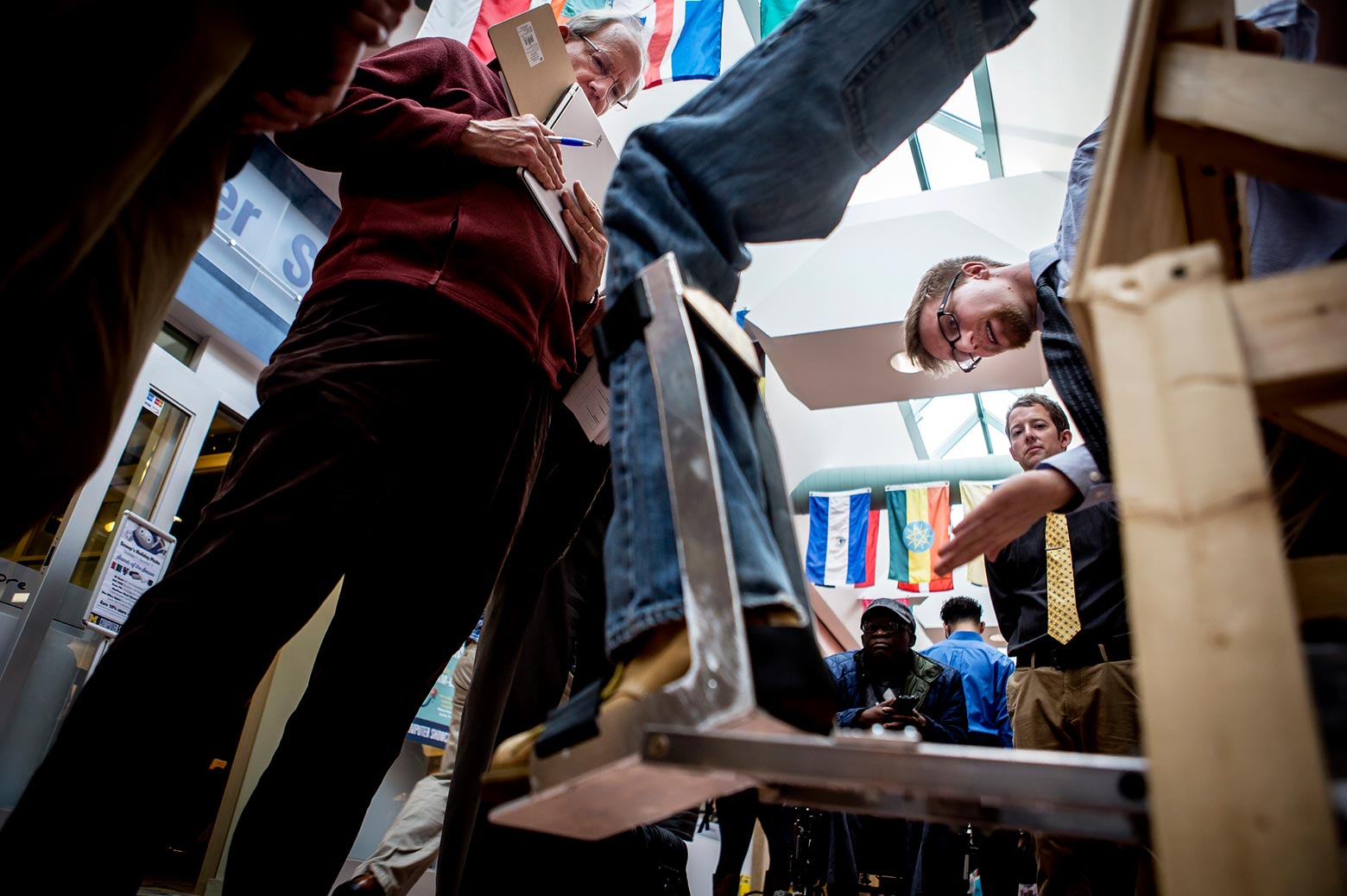 Wheelchair user Ben Dwamena was tired of relying on others to help him with the leg exercises he does several times a week. Essential for those who don’t have use of their legs, the exercises move the legs in a walking-like motion to improve blood flow, reduce muscle atrophy and improve bone density. Today they require a helper, along with cumbersome devices that resembles walking clutches and parallel bars.

Dwamena, a nuclear medicine doctor at the VA Ann Arbor Healthcare System, imagined a better way—a motorized system that would attach to his wheelchair and put his legs through the motions. And he asked a group of Michigan Engineering students to build it.

“I realized that a system like this would make me much more independent,” he said. “It would also make me stronger, since I’d be able to do my leg exercises several times a day instead of just a few times a week.”

Working with a budget of just $600, the team of mechanical engineering students devised a proof-of-concept system. It uses electric motors and a geared transmission connected to foot pads and leg braces to gently guide the legs through a walking motion. The system connects to a standing wheelchair, enabling users to exercise without leaving their chair.

Student Dana Barbera said the next steps for the project include refining the control system, enclosing the gearbox for safety and conducting more extensive reliability testing. She estimates that wheelchair users could be using the device in as little as five years.

“It’s always exciting to see something evolve from an idea into something you can touch,” she said. “It’s rewarding to be working on something that could impact people’s lives every day.”

Others on the project include mechanical engineering students John Benjamin, Adam Carlson, James Crowther and Nathaniel Erickson. The course they did the project for was ME 450, Design and Manufacturing. 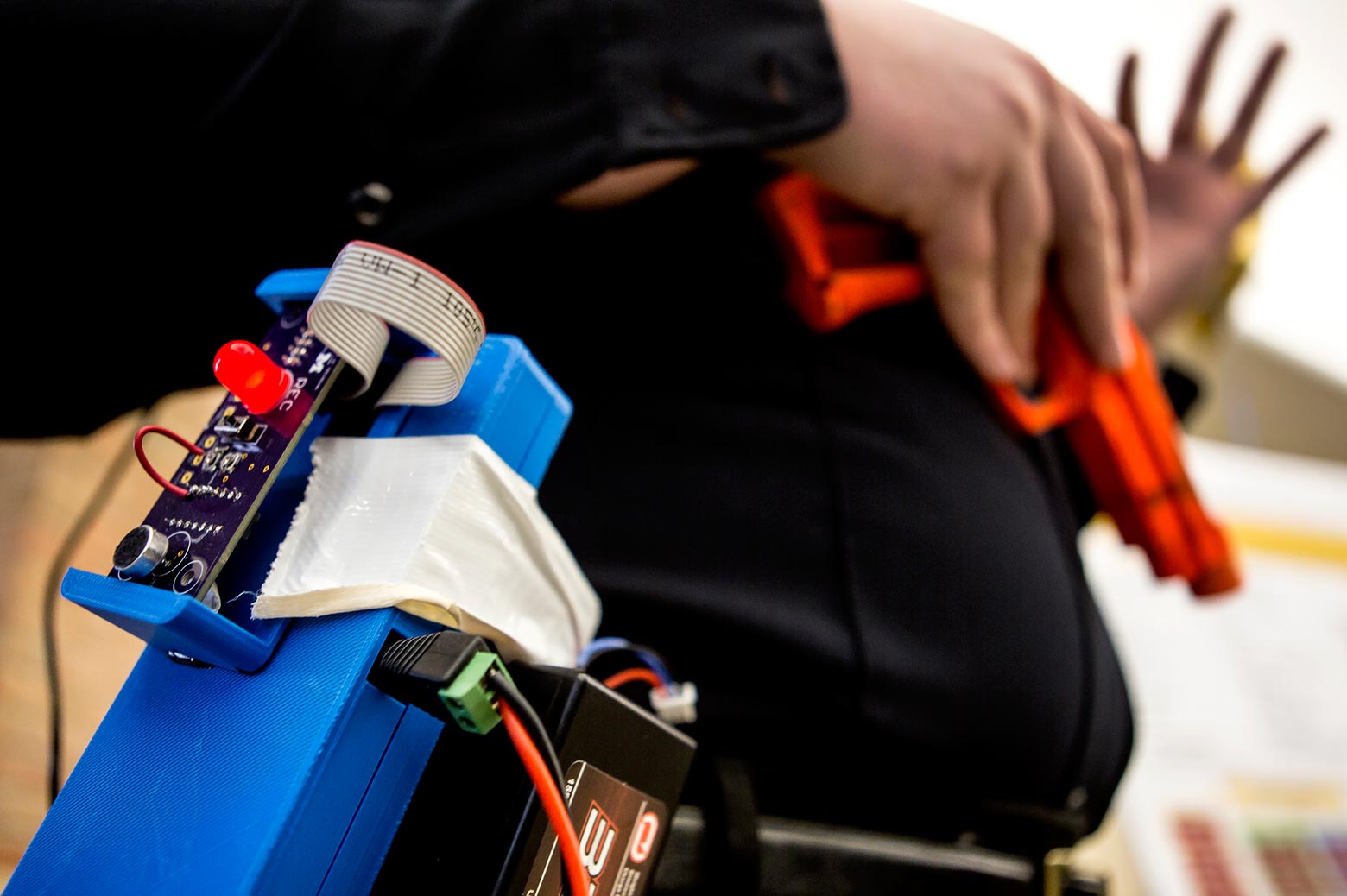 IMAGE:  Alex Faberge, CE BSE Student, demonstrates use of his team's device, POP Police Body Camera, a body camera that triggers on police officers once the gun has been released from the holster, during the 2015 MDP Design Expo. Photo: Joseph Xu

Influenced by recent high-profile incidents of police officers killing unarmed civilians, Alex LaBerge and his team wanted to develop a system that would protect both civilian lives and officer privacy.

“We wanted to record all the moments that could become dangerous,” said LaBerge, a senior studying computer engineering.

His team’s shoulder-mounted camera can be manually switched on by the officer, and it automatically begins recording when the officer draws his or her weapon, or when the system registers a loud noise that could indicate shouting or gunfire. The video is either recorded or live-streamed to a receiver.

To enable the system to sense when the officer’s gun is drawn, the gun would be marked with a radio frequency identification (RFID) chip, and an accompanying RFID sensor would sit on the holster. Once the chip gets out of the sensor’s range, the camera automatically begins recording.

The team estimates that the system could be manufactured at a cost of $200 per officer, which LaBerge says is cheaper than police cameras currently on the market. 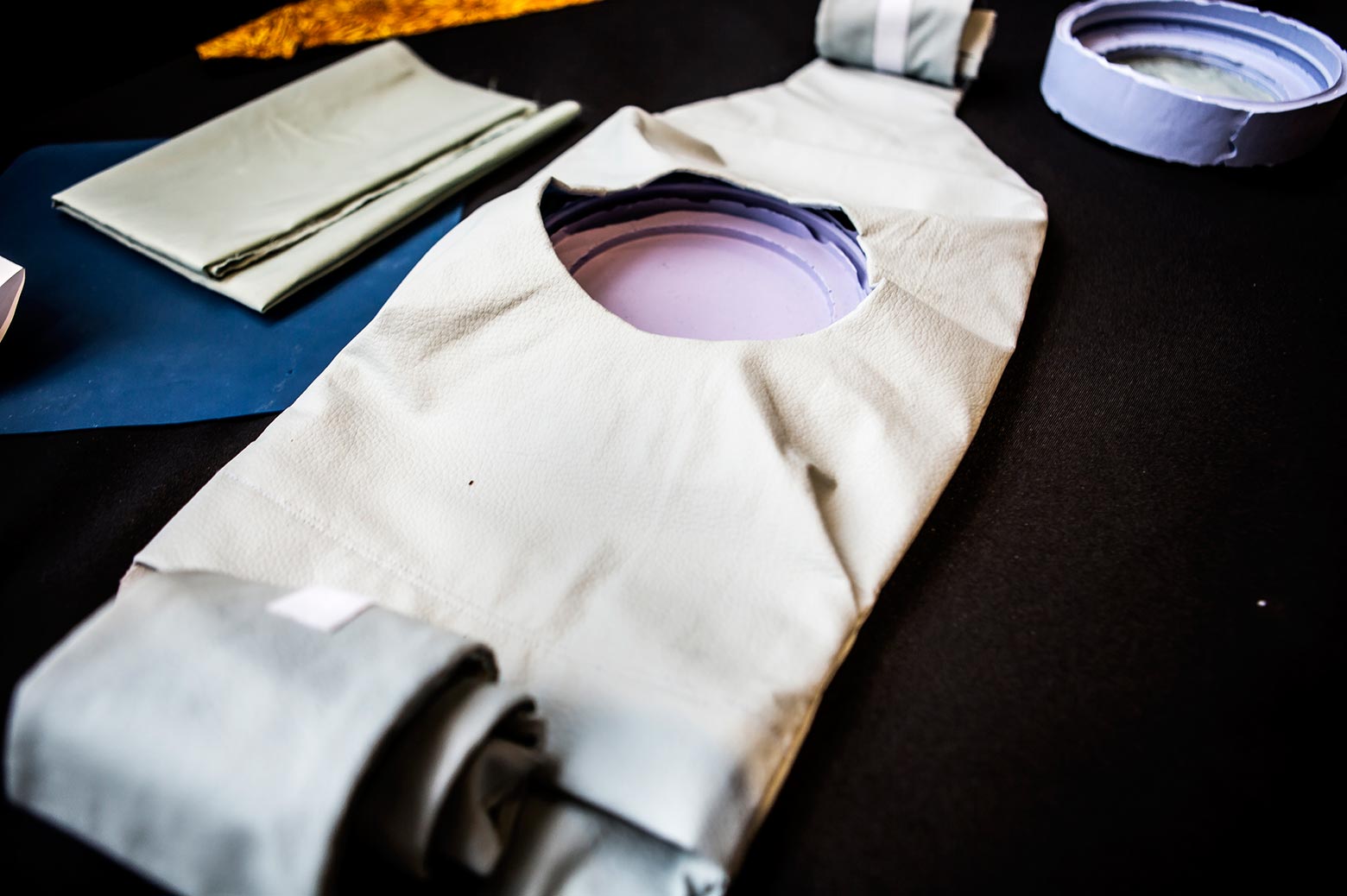 IMAGE:  A mechanical stimulation device for the uterus for low-resource countries shown during the 2015 MDP Design Expo. Photo: Joseph Xu

Bleeding out after giving birth is the leading cause of maternal mortality worldwide. Of all postpartum deaths, it accounts for 27 percent. The problem is worse in developing nations, where there aren’t enough nurses or other assistants available to give treatment that helps slow bleeding after delivery. The treatment is a simple belly massage that helps the uterus and the blood vessels within it contract.

After hearing about the problem from a fellow student who had traveled to Ghana, a team of mechanical engineering students set to work to find a solution. They created a comfortable, automated, belly massage belt.

“We sewed the belt, we hand-poured the silicon and 3D printed other components,” said team member Taylor Petri.

Sarah Geshwender did the sewing. She had taken a class in quilting in high school. The first iteration was made out of relatively thin, floral fabric, but for their final prototype, they settled on a soft vinyl.

“We started with nothing, and it’s cool to see how far we’ve come,” Geshwender said. “We overcame so many obstacles and now we have a product that might one day help people.”

They’ve talked to health care professionals about how to take it forward, and next semester a team of students involved in the Global Health Design Initiative will continue working on it.

Other team members are Anna Buzolits and Jordan Toor. The course they did the work in was ME450.

This story was written by Nicole Casal Moore, Kate McAlpine, and Gabe Cherry. 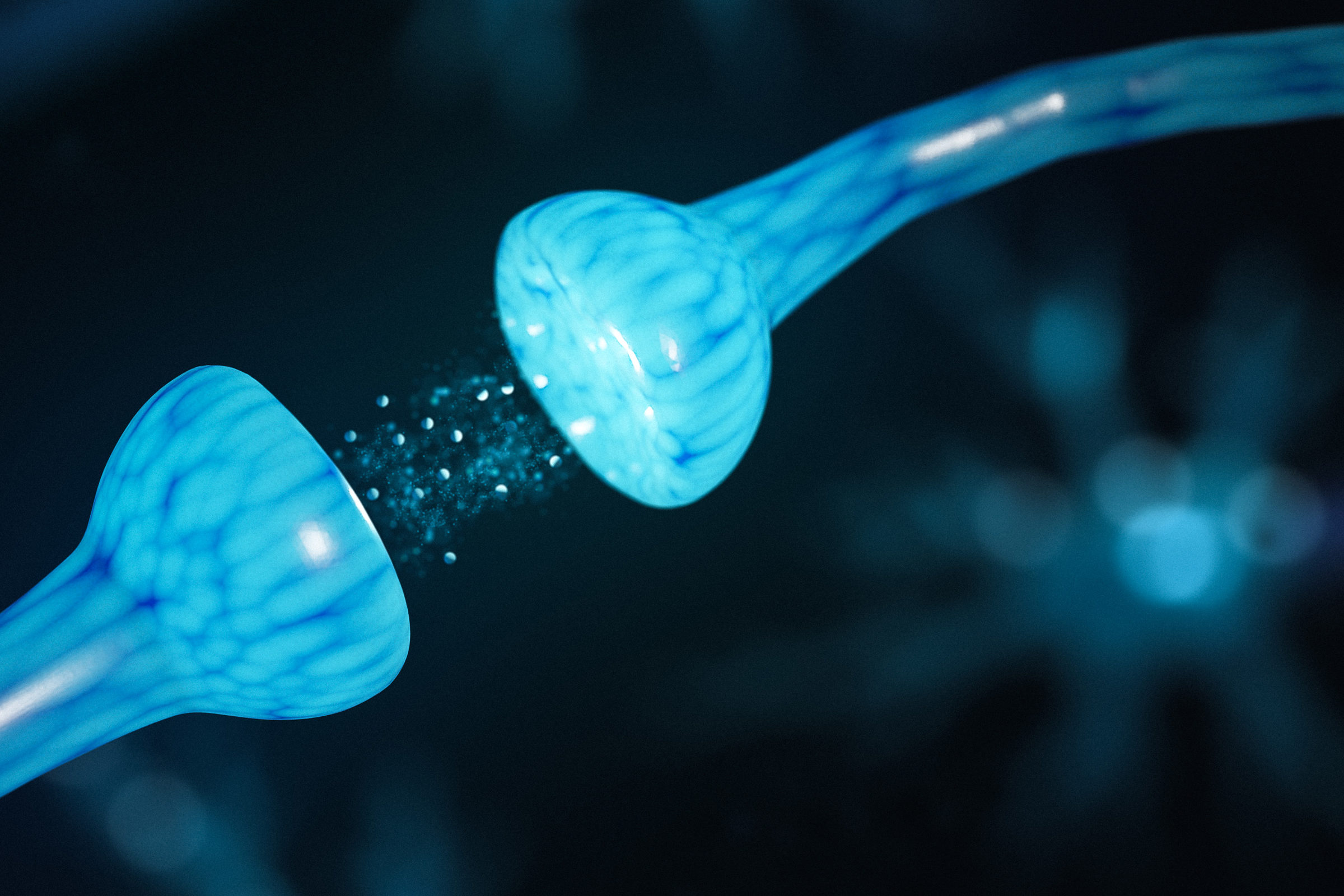 Competition and cooperation, which regulate the strengthening and weakening of connections in the brain, can now be modeled directly.| Medium Read 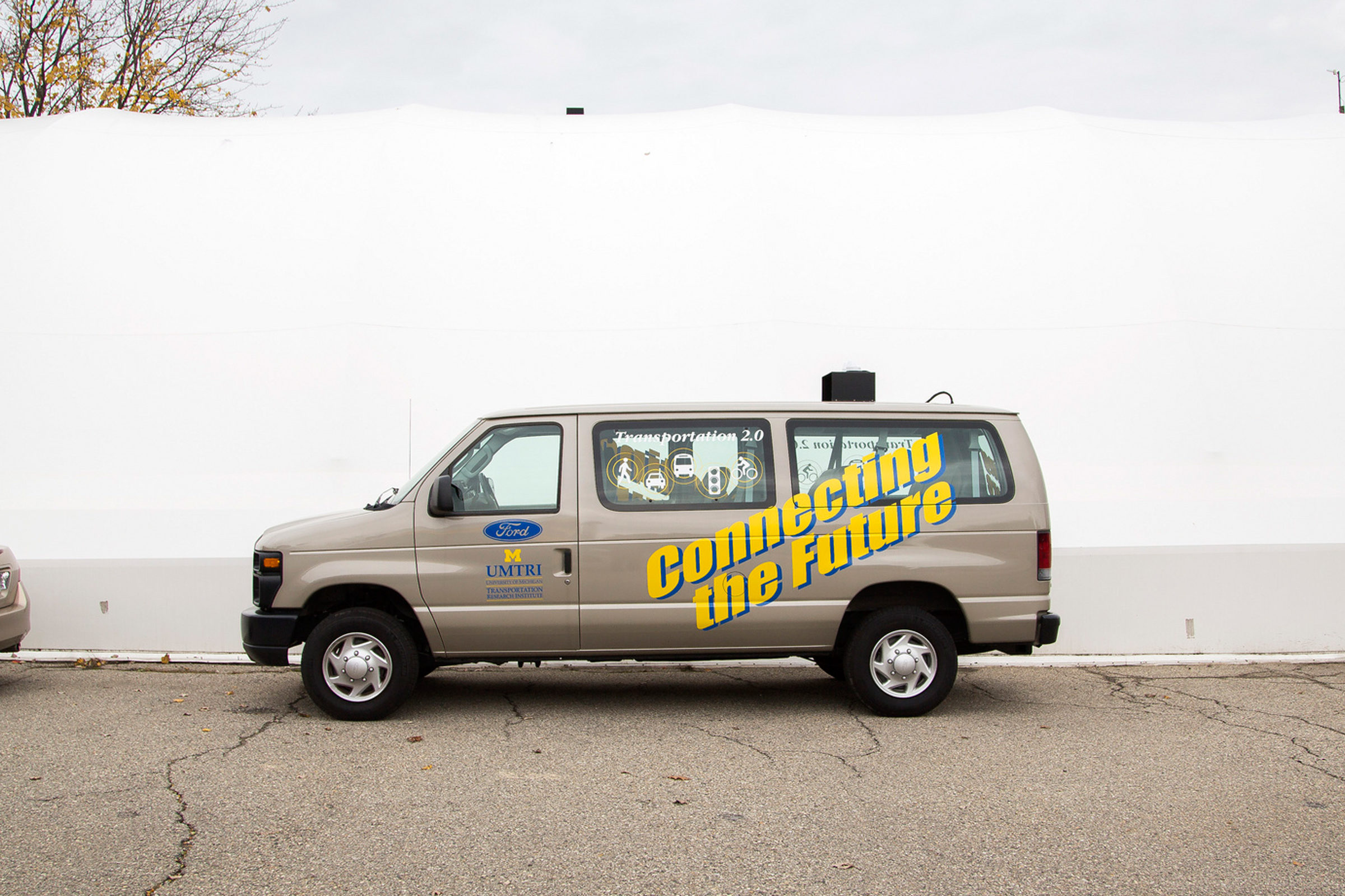 Joining forces to innovate the future of mobility