EECS: Electrical and Computer Engineering
October 12, 2015
The legislation authorizes programs and funding levels for agencies including the National Science Foundation and the National Institutes of Standards and Technology. | Short Read
Enlarge 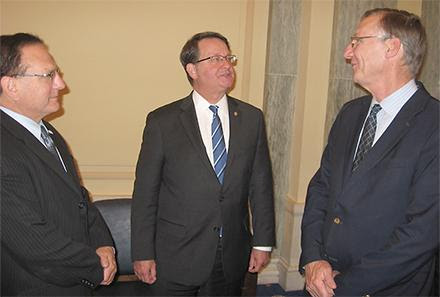 “We were lucky to have two University of Michigan leaders in D.C. yesterday for our final roundtable on shaping national research and development priorities,” said Sen. Gary Peters, D-Michigan, ranking member of the Senate’s Space, Science, and Competitiveness Subcommittee.

“Thanks to Dr. Stephen Forrest and Dr. Alan Taub for their ideas and insight on translating federal research into marketable innovations that will fuel our economic growth and create the jobs of the future.”

Forrest, who holds 285 patents and was inducted into the National Academy of Inventors in 2014, is a professor in electrical engineering and computer science, materials science and engineering, and physics, and is the former vice president for research.

Taub is a professor of engineering, and materials science and engineering. He is also the chief technical officer of Lightweight Innovations for Tomorrow, a National Network for Manufacturing Innovation initiative, and former chair for the Visiting Committee of Advanced Technology at the National Institutes of Standards and Technology.

Peters and Sen. Cory Gardner, R-Colorado, both members of the Senate Commerce, Science, and Transportation Committee, have held three roundtable discussions to solicit input from leading science and technology policy experts as the committee works to reauthorize the America COMPETES Act.

Tuesday’s roundtable focused on innovation, commercialization, and technology transfer. The panel discussed the appropriate roles of federal, state and private sector actors in reducing barriers to innovation, and how federal agencies can incentivize higher education institutions to improve research commercialization and accelerate innovation.

Forrest said excessive regulations get in the way of researchers’ ability to innovate and commercialize their discoveries.

Taub noted the United States was the best in the world at innovation, but there is a role for the federal government to support a new ecosystem that can get everyone who plays a role in innovation involved.

The senators plan to write draft legislation, which they will release this fall, drawing on the information gathered at the roundtable discussions.