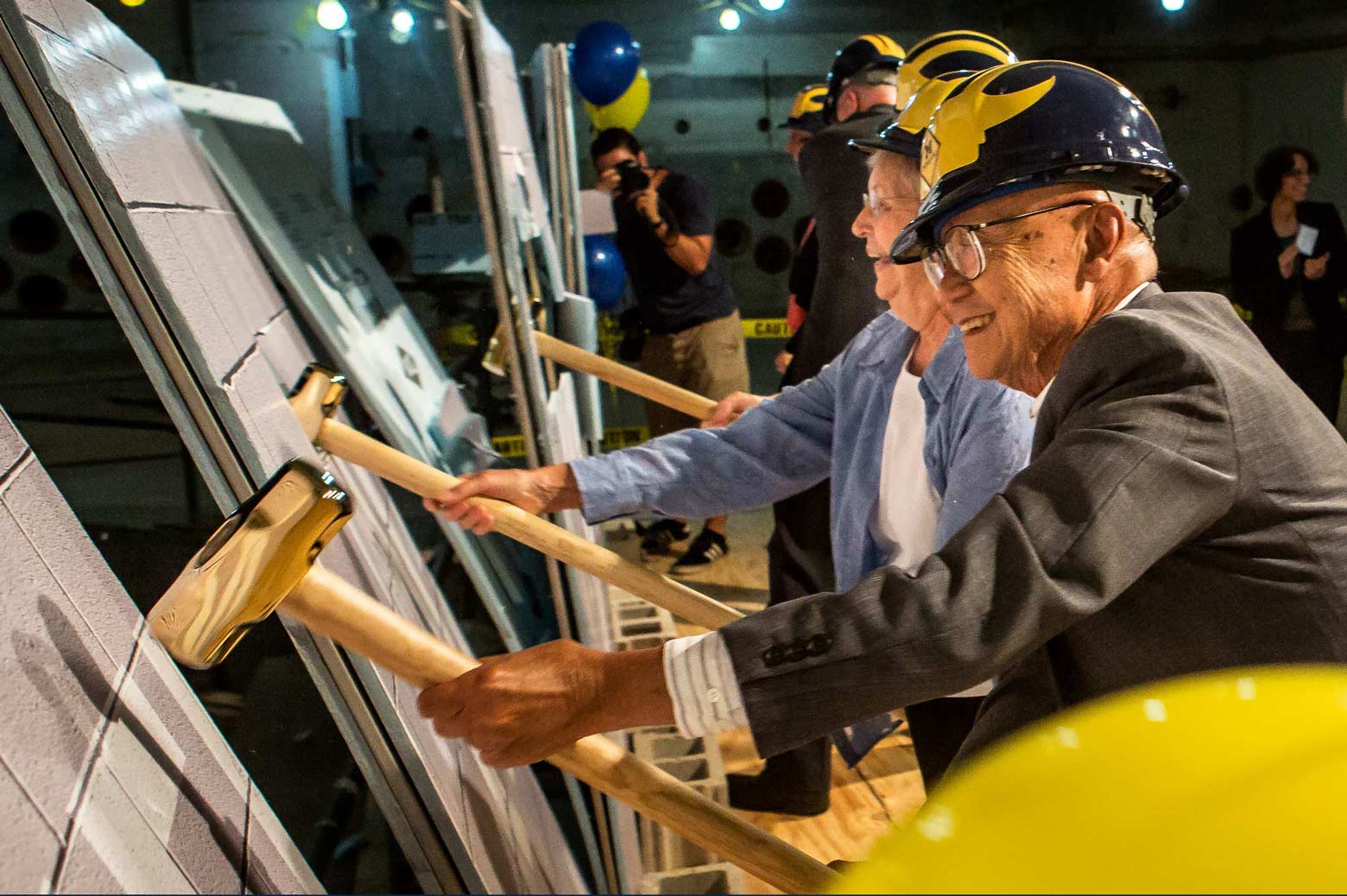 Following a “wall-breaking” ceremony on September 17, construction has begun on a new Nuclear Engineering Laboratory at the site of the former Ford Nuclear Reactor.

The completely renovated, four-story, 13,000-square foot space will continue the research legacy of the former reactor, housed in the Phoenix Memorial Laboratory until it was decommissioned in 2003 and subsequently dismantled. The site provides a fitting new home for several NERS faculty — professors Zhong He, David Wehe, Annalisa Manera, Sara Pozzi and Michael Atzmon — to advance their work on nuclear measurements, thermal-hydraulics, detection and nonproliferation.

Professor Pozzi heads the Consortium for Verification Technology, and her research laboratory’s work focuses on development of new techniques for nuclear measurements and nonproliferation, including detecting and characterizing special nuclear material — specifically uranium-235 and plutonium-239 — at “standoff” distances of several meters. These isotopes are a key ingredient in nuclear weapons.

“Having the space for testing new measurement and detection techniques is critical,” said Pozzi, who will now be able to host an accelerator to produce neutrons and gamma rays for nonproliferation studies. Her research will lead to more robust devices that can detect both gamma and neutron particles, something current detection technologies cannot do.

Professor Manera’s group specializes in high spatial and temporal resolution thermal hydraulics experiments. In a project funded by the U.S. Nuclear Regulatory Commission, she will oversee the building of a gamma tomography system to enable imaging of the two-phase flow structure within a reactor fuel bundle.

“For this experiment, the thick walls of the lab space will provide ideal shielding,” Manera said. “The availability of high power (>150 kW) makes the space ideal for powering pumps, compressors, and electric heaters simulating the nuclear fuel rods. The space designated for my lab also is connected to the basement through two large holes in the floor, which will allow for taller experimental setups.”

The length of the space will enable Manera’s group to study the evolution of two-phase flows in horizontal pipes. “The lab’s length — more than 12 meters — means we will be able to achieve fully developed flow, and that’s critical to our two-phase flow correlations for thermal-hydraulic computer codes,” she noted.

“The new lab opens a world of possibilities for our thermal hydraulic experiments,” added Manera, who plans to build an ‘imaging lab’ that will combine her group’s advanced radiation-based measurements with existing capabilities in laser- and conductivity-based high-resolution measurement techniques, both for single- and two-phase flows.

Professors He and Wehe will occupy the new Glenn F. Knoll Nuclear Measurements Laboratory. He leads the Orion Radiation Measurement Group, whose work centers on innovative semiconductor technologies to detect and image radiation.

The group’s core technology is a three-dimensional, position-sensitive, single-polarity charge sensing technique that has led to real-time gamma-ray imaging spectrometry systems. These systems have been used by the U.S. Department of Defense, Department of Energy and Department of Homeland Security for national security, nuclear non-proliferation and homeland security applications. Research groups have used the systems for proton cancer therapy, and more than 25 nuclear power plants around the world have used the systems to help ensure safe conditions for personnel.

“One of the greatest benefits will be to have all of the Measurements group in one larger laboratory,” said He. “That alone will benefit all of us, and will be very good for fostering student interactions as well.”

Professor Wehe’s group is exploring novel methods for radiation sensing, such as probing the air around a hidden radioactive source using tuned lasers, or exploiting new nanomaterials for radiation detection.

Wehe echoed the sentiments of his colleagues: “We are deeply appreciative of the generous donations from scientific giants whose contributions we have admired for decades. The Knoll laboratory will enable us to continue Professor Knoll’s legacy of breakthrough research on new radiation imaging modalities that will remain vital for global security, medicine and nuclear safety for generations.”

The Ford Nuclear Reactor was built in the 1950s as part of the Michigan Memorial Phoenix Project and was dedicated to investigating peaceful applications of atomic science and nuclear power. Seminal experiments performed using the reactor facility include initial studies of cosmic rays that led to the Nobel Prize for the bubble chamber, studies on the use of radioactive iodine to treat thyroid cancer, and early studies that launched the field of neutron interferometry.

Completion of the $12.4 million renovation is slated for spring 2017. Generous funding for this laboratory was provided by J. Robert Beyster, Gladys Knoll, the family of Harold Cohn and friends and family of John. S. King.