by Alexis Stempien
Aerospace Engineering
October 28, 2015
This year, the department celebrated the 50th anniversary of the Gemini IV mission, which was crewed by two University of Michigan Aerospace graduates, Ed White and Jim McDivitt. | Medium Read

Thank you to all who joined us for our Homecoming week events! 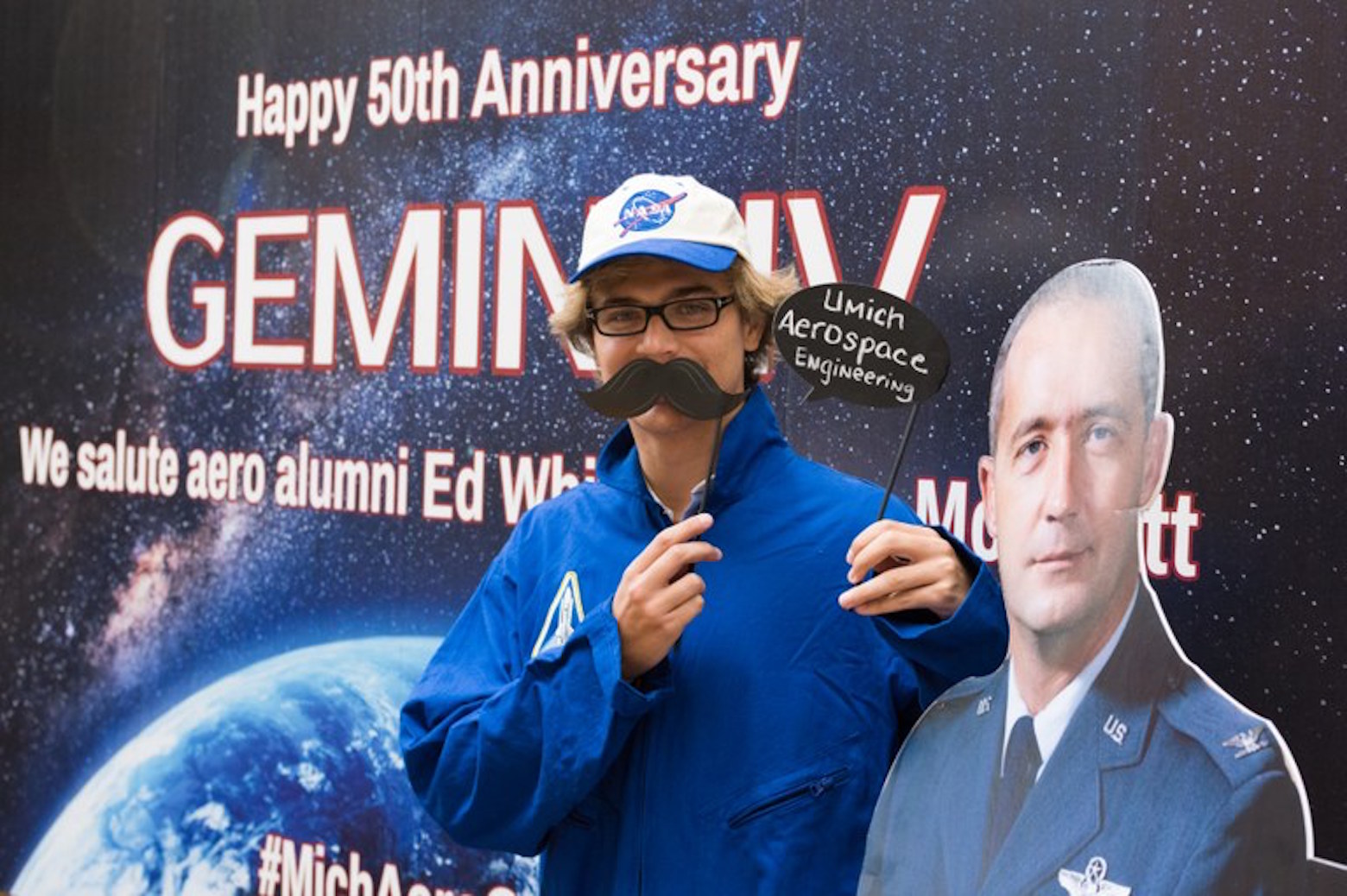 This year, the department celebrated the 50th anniversary of the Gemini IV mission, which was crewed by two University of Michigan Aerospace graduates, Ed White and Jim McDivitt. Launched in 1965, Gemini IV featured America’s first spacewalk and was a major stepping stone on the road to the lunar landing. In honor of this anniversary, a banner was hung across the atrium of the Françios-Xavier Bagnoud (FXB) building, and a selfie booth featured the opportunity to take a photo with a cardboard cutout of McDivitt himself!

Before the Homecoming weekend began, however, students were treated to several seminars created by Industry Advisory Board member Karen Albrecht: a Project Management Seminar with alumnus Patrick McNally (Entrepreneur and Managing Director, University of Michigan Space Physics Research Laboratory), “Now You Have a Job Offer… What Does It Mean?”, and our second annual Women in Engineering forum. 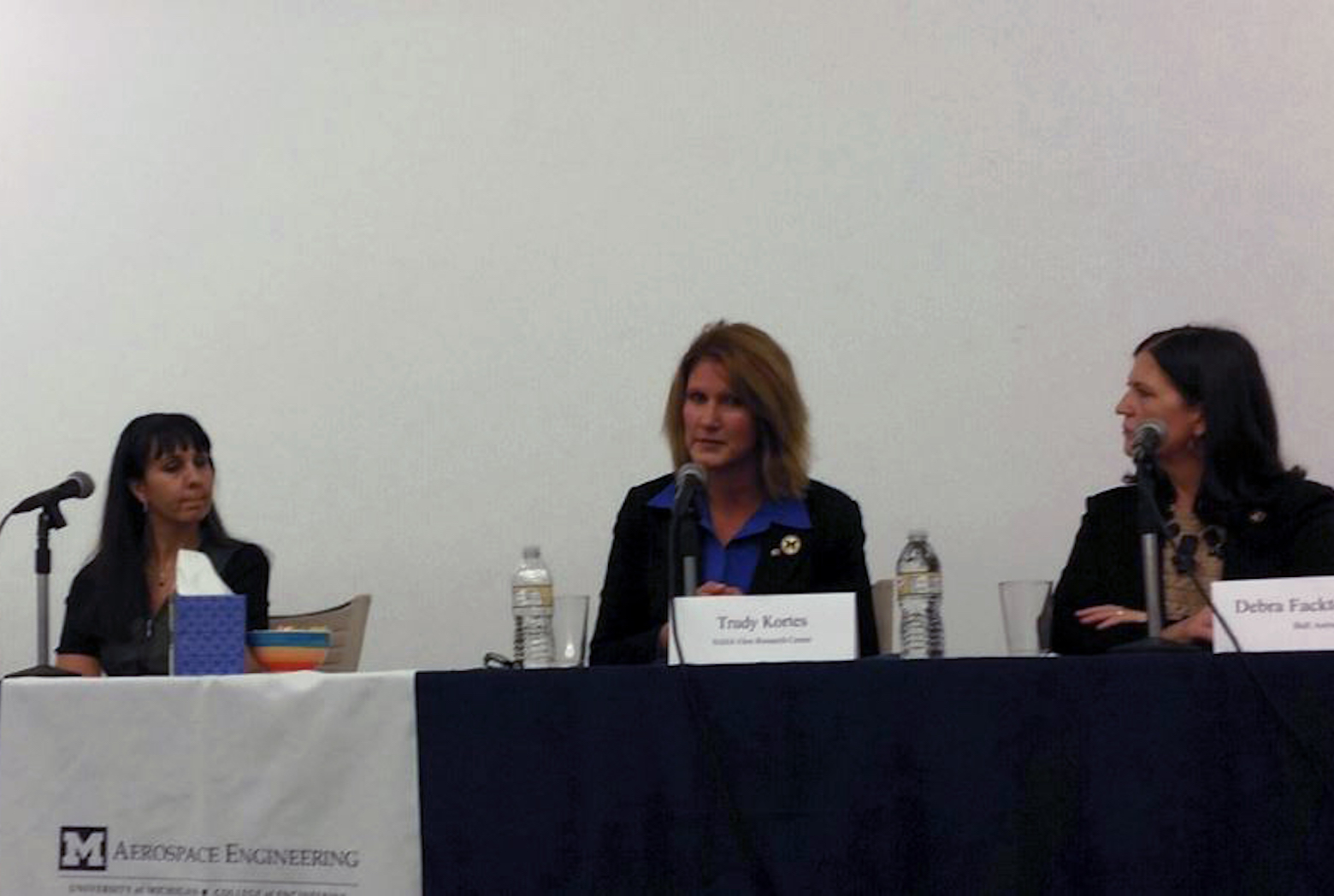 The Women in Engineering forum specifically was a great success and allowed female engineers access to four accomplished women in the field:

Thank you to all of our speakers for allowing our students these opportunities and to Karen Albrecht for making them a possibility!
On Friday, the Homecoming weekend truly began when dozens of alumni came home to Ann Arbor. FXB was abuzz with receptions, apparel sales (which have concluded), the aforementioned selfie booth with Jim McDivitt, raffles, and a State of the Department Address by department chair Dr. Daniel Inman. During Friday’s celebration, Dr. Inman also presented the 2015 Alumni Merit Award to Robert Meyerson (BSAE ’87), President of Blue Origin. (You can read more about the award here.)

For the first time, the College of Engineering celebrated Homecoming with a special “E-Rade” (or Engineering Parade) that featured the Michigan Fanfare Band, student project teams, and more and concluded with a barbecue tailgate sponsored by General Electric.

Of course, in the true Michigan tradition, Friday’s events were followed on Saturday by a football game against Northwestern, where the Wolverines shut out the Wildcats 38-0. Prior to the game, the College hosted the Michigan Engineering/Alumni Association Go Blue Tailgate at Oosterbaan Fieldhouse, which included student team displays, all-ages games, visits from Dean Munson and University President Mark Schlissel, and a performance by the Michigan Marching Band.

Again, thank you to all those who joined us for Homecoming, and we look forward to seeing you next year! Until then, you can follow department happenings on social media on Facebook, Twitter, and Instagram or by subscribing to our e-newsletter here.