by Kate McAlpine
Michigan Engineering
September 8, 2015
Kirigami could be the key to flat, lightweight solar cells that can track the sun across the sky.| Medium Read
By borrowing from kirigami, the ancient Japanese art of paper cutting, researchers at U-M are developing solar cells that may expand efficiency while lowering the weight.

Solar cells capture up to 40 percent more energy when they can track the sun across the sky, but conventional, motorized trackers are too heavy and bulky for pitched rooftops and vehicle surfaces. Now, by borrowing from kirigami, the ancient Japanese art of paper cutting, researchers at the University of Michigan developed solar cells that can have it both ways.

“The design takes what a large tracking solar panel does and condenses it into something that is essentially flat,” said Aaron Lamoureux, a doctoral student in materials science and engineering and first author on the paper in Nature Communications. 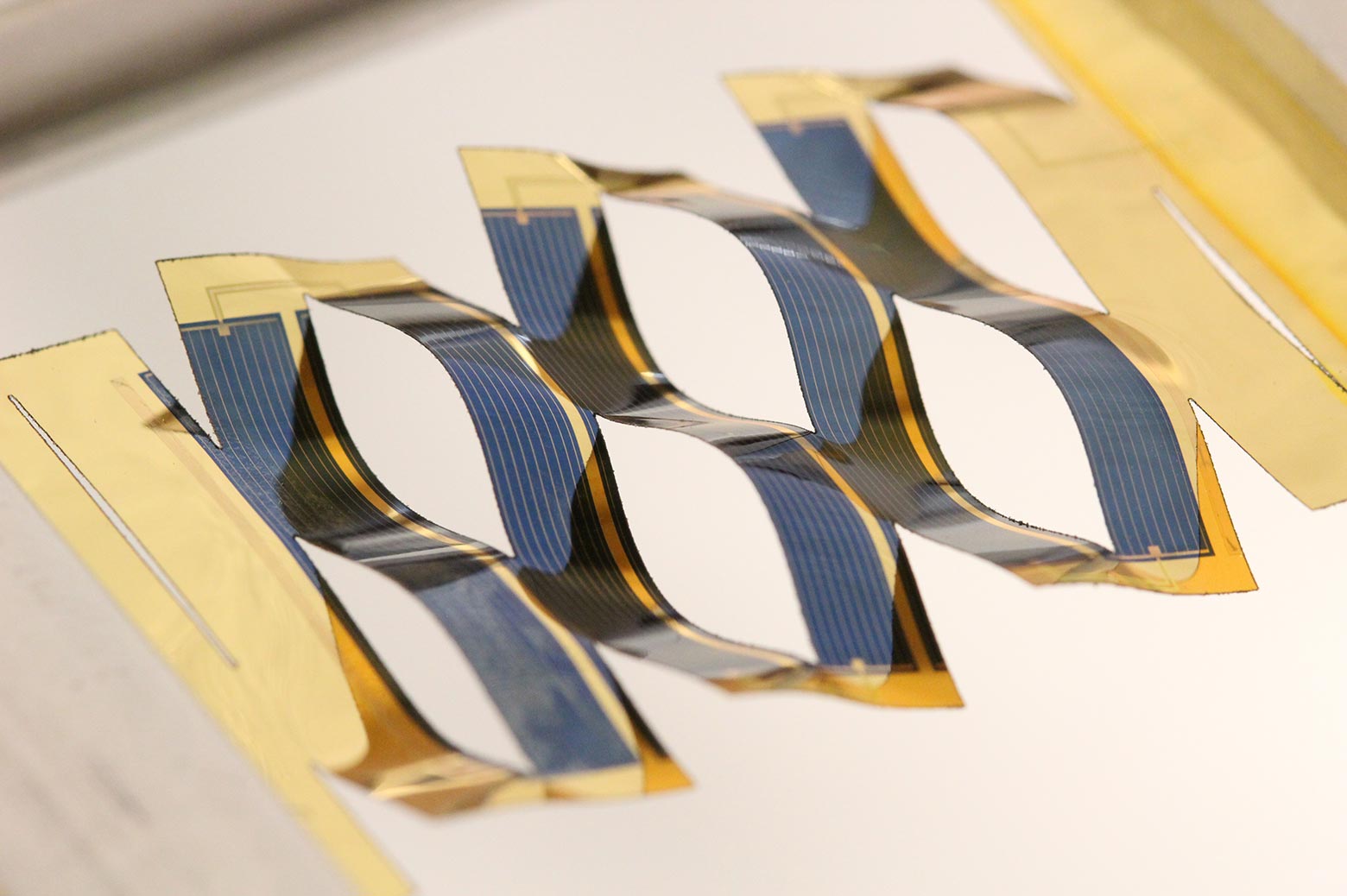 IMAGE:  Side profile of dynamic kirigami structure capable of solar tracking, consisting of monolithically integrated, single crystalline yet flexible, gallium arsenide solar cells on a polyimide sheet. The angle of tilt of each solar cell is controlled uniformly as a function of stretching.

Residential rooftops make up about 85 percent of solar panel installations in the U.S., according to a report from the Department of Energy, but these roofs would need significant reinforcing to support the weight of conventional sun-tracking systems. A team of engineers and an artist developed an array of small solar cells that can tilt within a larger panel, keeping their surfaces more perpendicular to the sun’s rays.

“The beauty of our design is, from the standpoint of the person who’s putting this panel up, nothing would really change,” said Max Shtein, an associate professor of materials science and engineering. “But inside, it would be doing something remarkable on a tiny scale: the solar cell would split into tiny segments that would follow the position of the sun in unison.”

Solar cell researchers think of tracking in terms of how much of a solar panel the sun can “see.” When the panel is at an angle, it looks smaller. By designing an array that tilts and spreads apart when the sun’s rays are coming in at lower angles, they raise the effective area that is soaking up sunlight.

To explore patterns, the team of engineers worked with paper artist Matthew Shlian, a lecturer in the school of art and design. Shlian showed Lamoureux and Shtein how to create them in paper using a plotter cutter. Lamoureux then made more precise patterns in Kapton, a space-grade plastic, using a carbon-dioxide laser.

Although the team tried more complex designs, the simplest pattern worked best. With cuts like rows of dashes, the plastic pulled apart into a basic mesh. The interconnected strips of Kapton tilt in proportion to how much the mesh is stretched, to an accuracy of about one degree.

To make the solar array, Kyusang Lee, a doctoral student in electrical engineering, built custom solar cells in the lab of Stephen Forrest, the Peter A. Franken Distinguished University Professor of Engineering and Paul G. Goebel Professor of Engineering. He and Lamoureux attached them to an uncut piece of Kapton, leaving spaces for the cuts. Then, Lamoureux patterned the Kapton with the laser cutter. 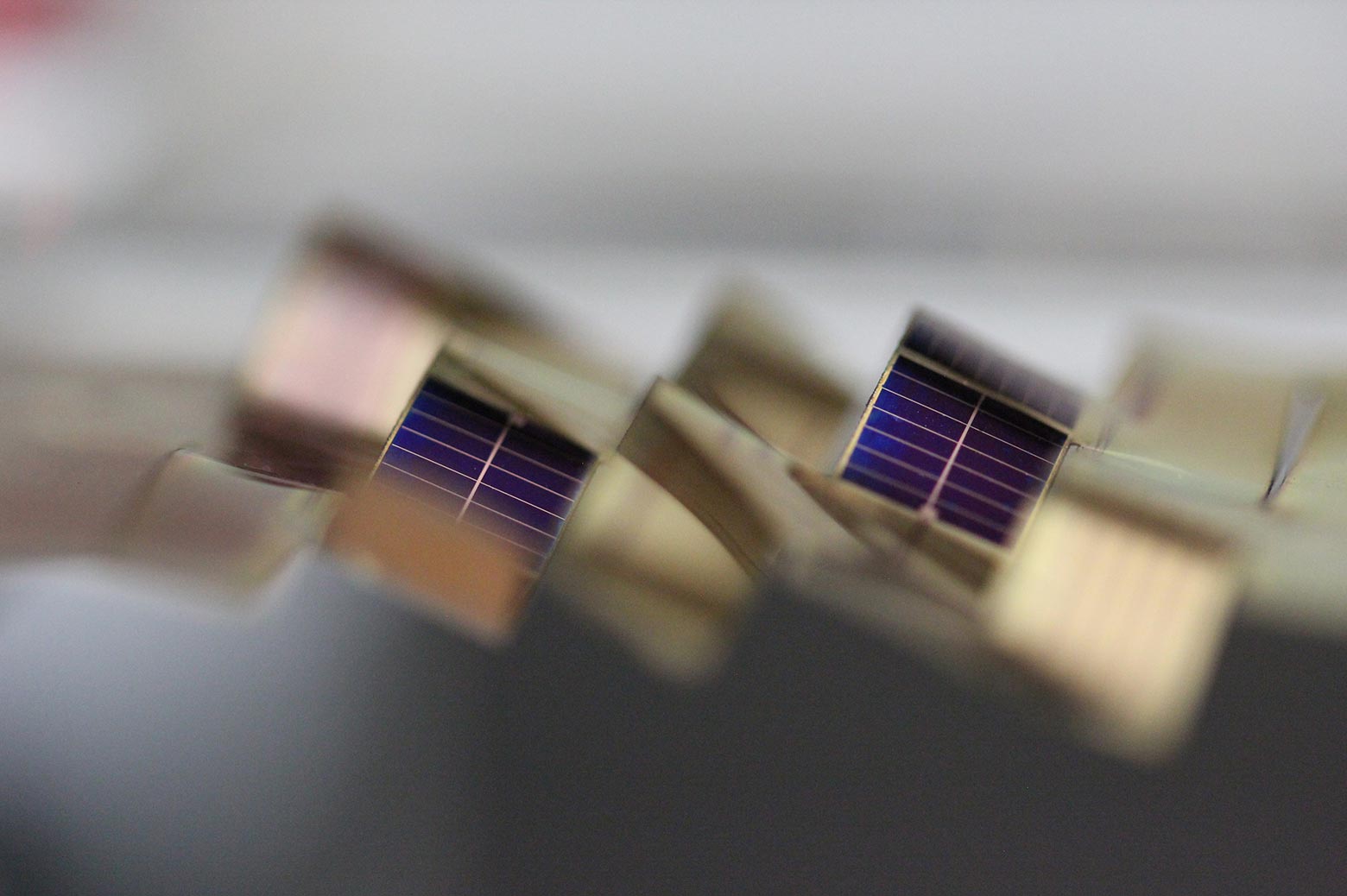 IMAGE:  Side profile of dynamic kirigami structure capable of solar tracking, consisting of monolithically integrated, single crystalline yet flexible, gallium arsenide solar cells on a polyimide sheet. The angle of tilt of each solar cell is controlled uniformly as a function of stretching.

The design with the very best solar-tracking promise was impossible to make at U-M because the solar cells would be very long and narrow. Scaling up to a feasible width, the cells became too long to fit into the chambers used to make the prototypes on campus, so the team is looking into other options.

The optimized design is effective because it stretches easily, allowing a lot of tilt without losing much width. According to the team’s simulations of solar power generation during the summer solstice in Arizona, it is almost as good as a conventional single-axis tracker, offering a 36 percent improvement over a stationary panel. Conventional trackers produce about 40 percent more energy than stationary panels under the same conditions, but they are bulky, prone to catching the wind and ten or more times heavier, said Shtein.

“We think it has significant potential, and we’re actively pursuing realistic applications,” said Shtein. “It could ultimately reduce the cost of solar electricity.”

The paper on this work is titled “Dynamic kirigami structures for integrated solar tracking.” The study was funded by the National Science Foundation and NanoFlex Power Corporation.

The University of Michigan has applied for a patent and is seeking partners to bring the technology to market.

Researchers
In the News
SmithsonianJul 6, 2017
New invention puts the power of static in your pocket