Engineering a better future for Ethiopia

August 19, 2015
Prof. Hofmann’s students felt they gained a lot from the course. Several of them will likely go on to teach control courses in coming semesters.| Short Read
Enlarge

Prof. Heath Hofmann and Ph.D. student Abdi Zeynu traveled to Addis Ababa Institute of Technology (AAIT) in the capital of Ethiopia to bring the latest knowledge in Controls Systems and Power to a nation in dire need of this expertise.

AAIT is one of the largest technical colleges in Ethiopia, but several of its programs are still young. Working under the Ethiopia-Michigan Platform for Advancing Collaborative Engagement (EM-PACE), Prof. Hoffman and Abdi made preliminary visits to the school of Electrical and Computer Engineering to assess their goals and needs. During their return in June 2015, they taught a 3-week course in Electric Machinery and Drives, and also provided consultation and support as the school’s engineering college expanded its Control and Power programs. The college plans to add a Ph.D. program in these areas in the near future.

To facilitate the course and the growing program, Abdi, who was born in Ethiopia and lived there until 2007, oversaw the purchase and installation of new lab equipment, including electric drives and controllers. The cost of the trip and new equipment was supported by the University of Michigan Department of Obstetrics & Gynecology through the UM-Ethiopia collaboration.

“This is the oldest university in the country,” says Abdi, “and most of their equipment was from when the program started.”

“They didn’t have anything that really let them design controllers and test them out on actual hardware,” adds Prof. Hofmann. 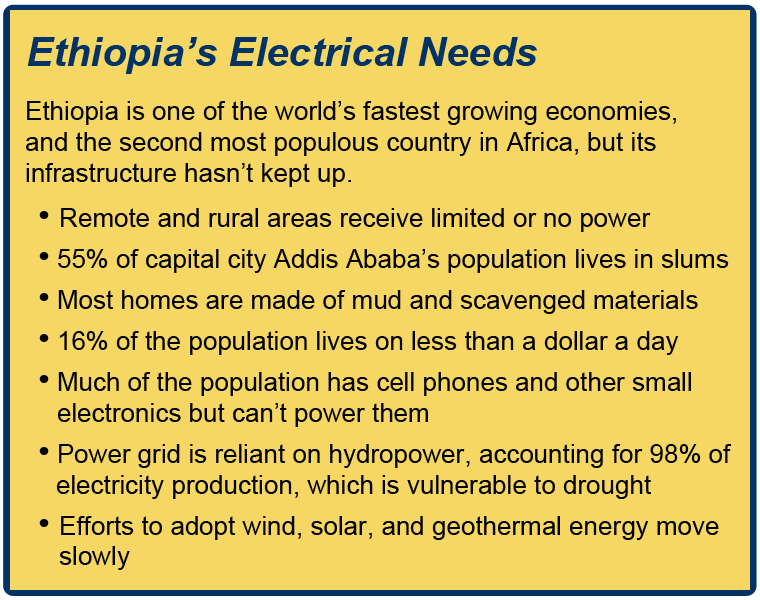 The emphasis on power and controls is of particular importance to Ethiopia’s growing infrastructure. The nation is undergoing rapid economic growth, and their current power system is unable to keep up with new construction and new loads. Several ongoing projects focus on harnessing more hydropower plants, and bringing smaller ones to rural areas to power the many remote villages.

Many of the most impoverished communities operate without any electricity at all, requiring a trip to centralized markets for any power needs.

Prof. Hofmann’s students felt they gained a lot from the course, according to Abdi. Several of them will likely go on to teach this and other control courses in coming semesters. Others will pursue work in industry, to address many of the problems inherent in Ethiopia’s growing economy. Abdi hopes that with continued effort, he can contribute to a productive generation of problem solvers.

“This kind of class gives you the confidence that you can do things,” he says. “The more we do this the more prepared they will be to make a difference.”

Prof. Hofmann intends to return to the school in the future to continue teaching and guiding the growing department. Abdi plans to continue his work with Ethiopia in some capacity for the foreseeable future. 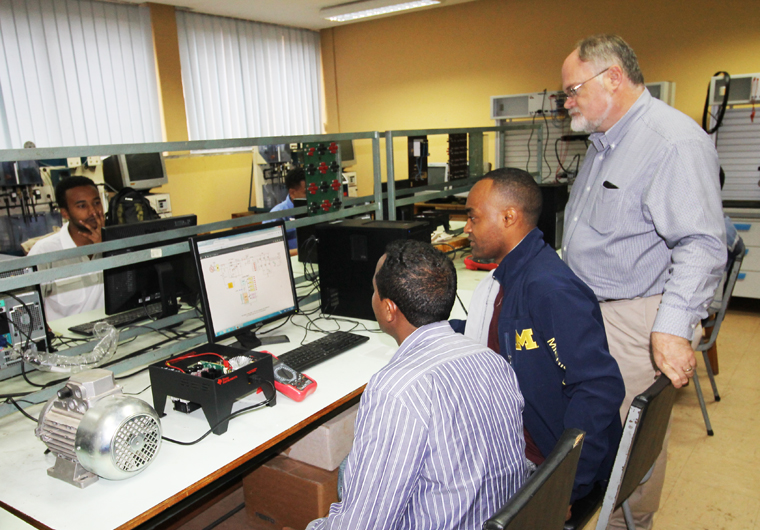 The EM-PACE initiative is a university-wide program, involving faculty and students from the Medical School, the College of Engineering, the School of Natural Resources and Environment, the Program in Biomedical Sciences, and the School of Public Policy. The goal of the program is to address some of the most pressing problems identified by country leadership, with an emphasis on health, the environment, and post-graduate science education. While teaching is a major component of the program, many involved work at the infrastructural level with hospitals and other public services.