by Gabe Cherry
Michigan Engineering
July 6, 2015
A wearable sensor being developed at U-M could provide doctors with the first simple, portable, non-invasive way to measure fluid status--the volume of blood that's coursing through a patient's blood vessels at any given time.| Medium Read

A wearable sensor being developed at the University of Michigan could provide doctors with the first simple, portable, non-invasive way to measure fluid status—the volume of blood that’s coursing through a patient’s blood vessels at any given time.

Fluid status is a diagnostic measure much like heart rate or blood pressure. It can alert doctors when a cardiac patient has excess fluid that prevents their heart from pumping efficiently or provide a more precise measure of how much waste fluid to filter out of a dialysis patient’s blood. It can also tell doctors how much fluid to give to a trauma patient who has lost blood or a septic patient with an overwhelming infection. 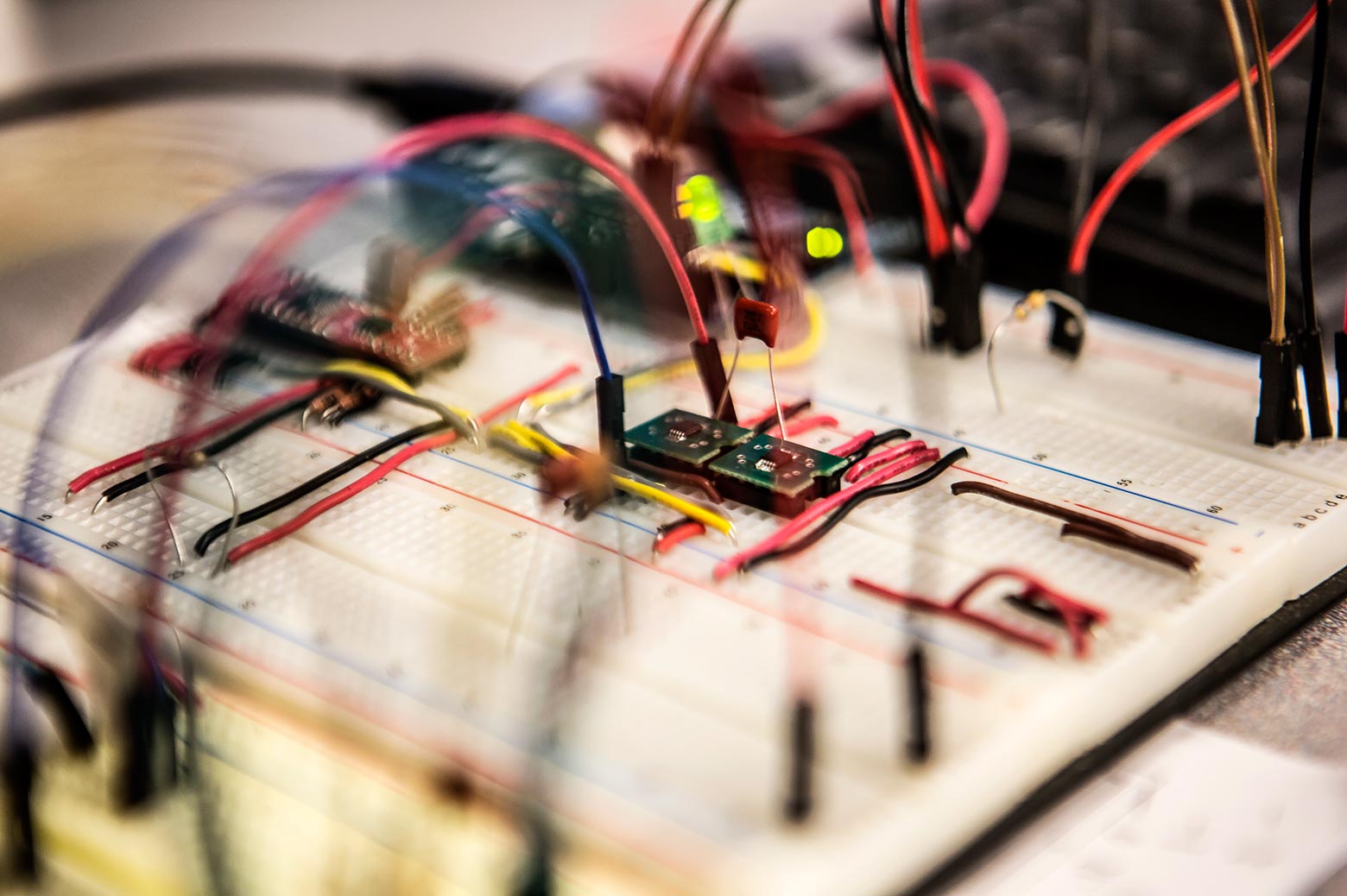 IMAGE:  Barry Belmont and Adetunji Dahunsi, BME Researchers, demonstrate the mobile application that is connected with a wearable sensor that they developed that could provide doctors with a portable and non-invasive way of measuring fluid status. Photo: Joseph Xu

But today, getting an accurate measure of fluid status requires an ultrasound or the insertion of a specialized catheter that measures the pressure of blood flowing through a blood vessel. Both tests are expensive and complex, and must be administered in a hospital by an expert.

The new sensor could change that by making measuring fluid status as simple as strapping a smartphone-sized device to a patient’s arm or leg and asking them to take a deep breath. And because it can be worn for extended periods of time, the device could provide doctors and caregivers with an unprecedented amount of real-time data about fluid status. Researchers will soon begin patient testing.

“Our new sensor doesn’t require a lot of time or expertise, so it could be used in an intensive care unit, a small community clinic, an ambulance, by a patient at home, at an accident scene or even on the battlefield,” said Barry Belmont, a biomedical engineering doctoral student at U-M who is helping to develop the technology. “And it provides continuous, real-time data, which is wasn’t possible in the past.”

The device works uses a process called Dynamic Respiratory Impedance Volume Evaluation, or DRIVE, to measure the changes in “bioimpedance,” or electrical conductivity, of the wearer’s limb as they breathe. Blood is an excellent conductor of electricity, so a patient with more blood will have greater conductivity. It’s similar in principal to the ultrasound method of measuring fluid status, which directly measures the changes in the vena cava, the body’s largest vein. But instead of measuring vein size to calculate fluid status, the new device gets the same information by measuring bioimpedance. The new device isn’t the first to use this approach, but it’s the first to incorporate fluid status measurement into a wearable device. 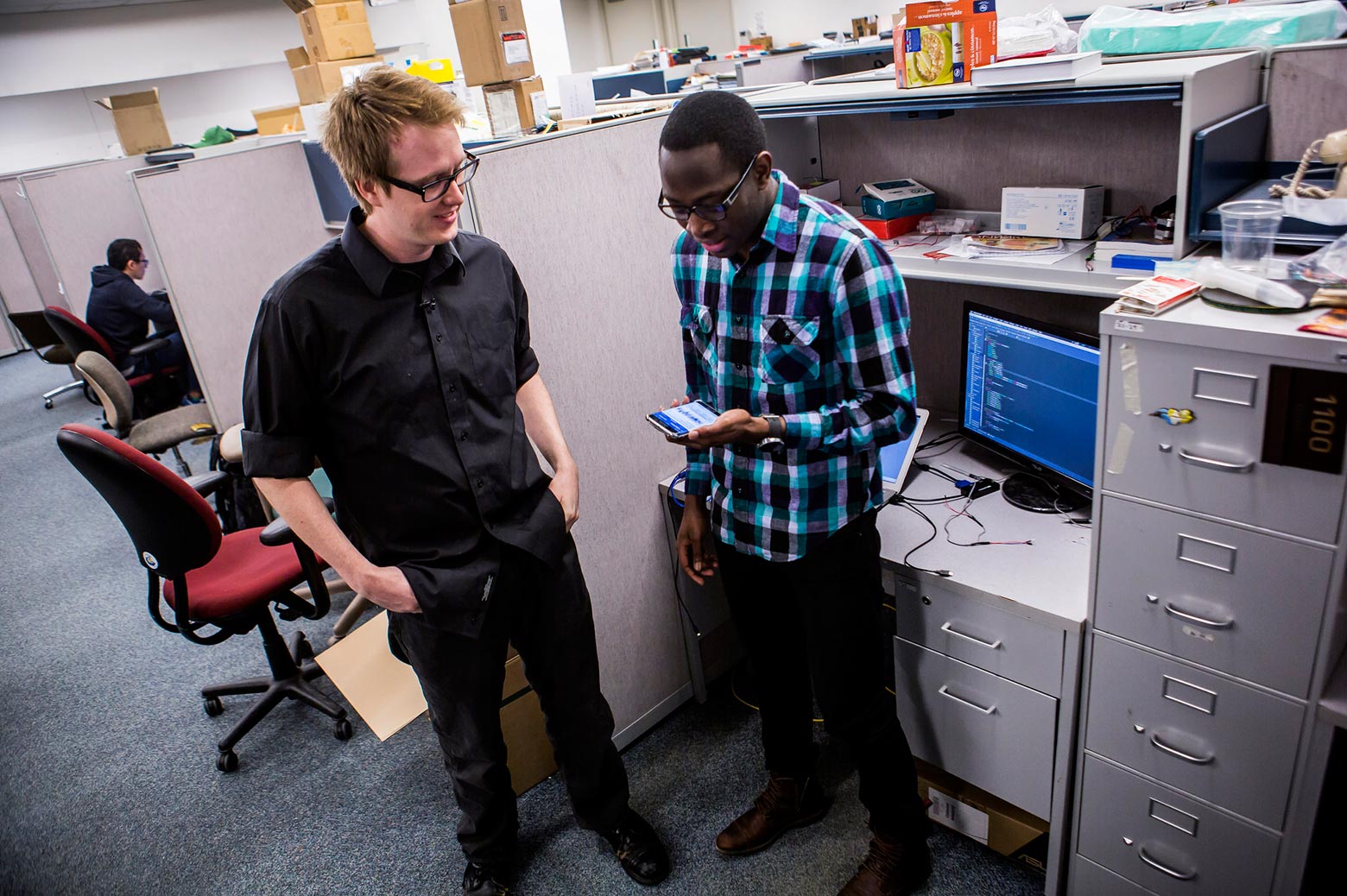 IMAGE:  Barry Belmont and Adetunji Dahunsi, BME Researchers, demonstrate the mobile application that is connected with a wearable sensor that they developed that could provide doctors with a portable and non-invasive way of measuring fluid status. Photo: Joseph Xu

The researchers say their technology could effectively make fluid status another vital sign.

“This could turn fluid status into a routine diagnostic tool, the way we measure heart rate and blood pressure today,” said Kevin Ward, executive director of the U-M Center for Integrative Research in Critical Care (MCIRCC), which developed the concept and the device. “It has the potential to improve care and lower costs for millions of patients, and I think it’s a great example of how collaboration between fields like engineering and medicine can have a direct benefit on the lives of patients.”

The team has been testing a benchtop version of the sensor, built from off-the-shelf components, for more than a year. The new study will compare the accuracy of the wearable sensor to that of the conventional ultrasounds of the vena cava in patients undergoing dialysis or intensive care.

“Right now, doctors don’t have a good way to determine how much fluid to remove from a dialysis patient,” explains Hakam Tiba, a research investigator in the Department of Emergency Medicine at the U-M Health System. “They often end up removing too much, which can cause pain and fatigue, and it can also exacerbate other health problems. A wearable sensor would enable doctors to be much more precise by providing a real-time picture of the effect that dialysis has on a patient.”

A real-time stream of fluid status data could also help doctors provide better treatment to patients who need additional fluid, like sepsis patients, Belmont said. He expects the current round of testing to continue through the end of 2015. If the tests are successful, the device will go to the FDA for approval, which will likely take an additional two years before it’s available for broad use.