IMAGE:  Members of the University of Michigan Chapter of NSBE

The 41st National Convention of the National Society of Black Engineers (NSBE) brought together over 3,600 members to Anaheim, California for career fairs, competitions, professional workshops, networking events, and elections. 55 U-M engineers attended the convention, themed “Reimagining Your Future,” and developed vital connections in their field. 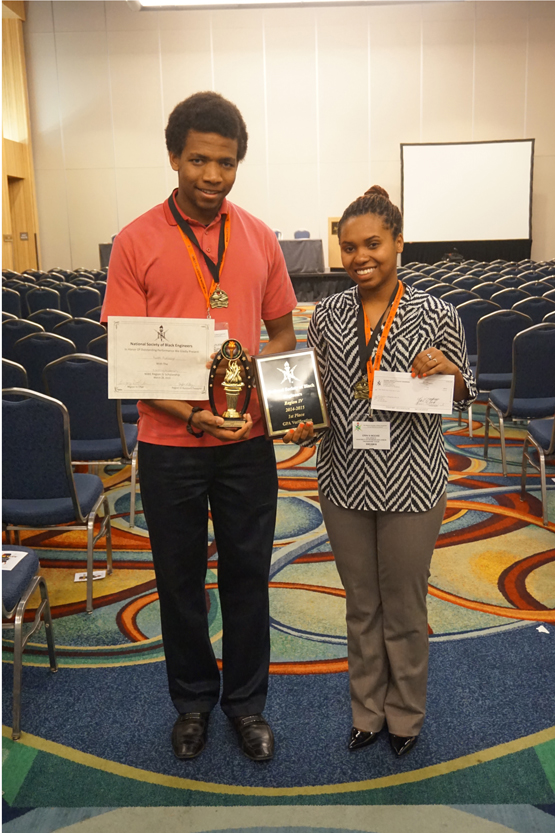 Kwesi Rutledge, at the time an EE senior and the chapter’s Academic Excellence Chair, was thrilled to be a part of the event.

“I feel reenergized to return to school and join the ranks of the successful professional engineers that I saw there,” he says.

Kwesi was one of several members to attend U-M NSBE’s alumni dinner during the week’s events. The dinner brought together current students with alumni from several generations. In addition to industry work, some in attendance were faculty members at different institutions or involved in government work in Washington, D.C.

Even more vital connections could be made at the convention’s career fair, attended by over 100 major companies. In preparation for the event, students could take advantage of many career workshops to hone their interviewing, networking, and general industry know-how.

“Learning professionally through workshops helped me prepare for later on in the week,” says Kwesi. “These lessons will forever change how I handle making introductions and learning about others.”

The U-M chapter and several of its members were recognized at the convention for exceptional commitment to the society’s mission to “increase the number of culturally responsible Black Engineers that excel academically, succeed professionally, and positively impact the community.”

Two members of the chapter were selected from the entire region to receive scholarships, a Living the Mission Scholarship and Excelling Academically Scholarship. The U-M chapter also earned second Place in The Amazing Race. This competition was a year-long challenge for all of the chapters in Region 4 of NSBE to measure the success of the programs that they organize. Things like study sessions facilitated by tutors and participation in monthly meetings amongst the chapters of a region were all tracked to produce the rankings for this competition.

Kwesi left the event with a greater sense of connection to his fellow NSBE members, and the larger engineering field.

“I’m excited to continue to give back to the community on behalf of NSBE,” he says. “The mission that helped improve and train a young engineer like me will hopefully do the same for 10,000 young black engineers in the future.”

Photos from the Convention