Autonomous vehicles are in hot demand right now, and that’s just as true at sea. UM::Autonomy designs, programs, and builds their own autonomous boat every year for the annual RobotBoat competition, sponsored by the Association for Unmanned Vehicle Systems International (AUVSI) Foundation and the Office of Naval Research (ONR). This year the team took third prize.

The RobotBoat competition judges its entrants with a wide range of challenges that are designed to expose students to the many difficulties of autonomous operation.  The tests are held in a realistic maritime environment where the boats must pass through gates, avoid obstacles, dock, and launch and recover an unmanned aerial vehicle while in motion.

For this year’s competition, UM::Autonomy performed a complete hull redesign, motivated by instability in their previous designs. The result was a boat that sat much lower in the water, allowing it to remain stable even through zero-point turns. The team also decided to fully waterproof the boat, allowing more testing time in heavy rain.

With a 3rd place finish out of 15 teams, the improvements paid off. 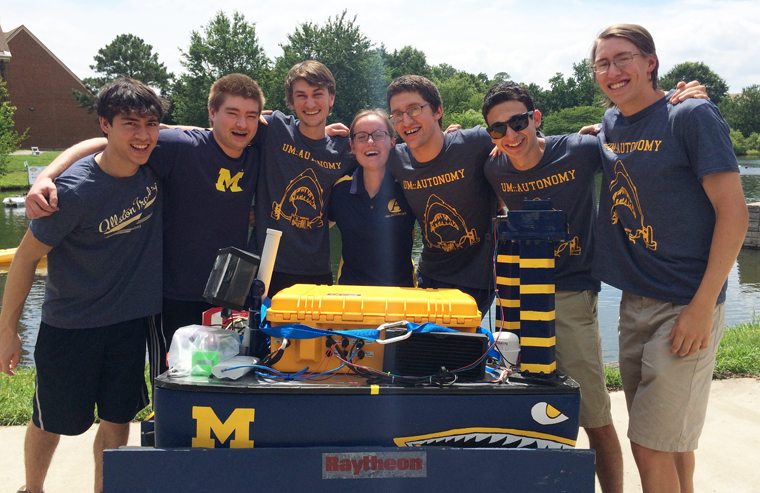 “Because our team continues from year-to-year, we have the opportunity to learn from past designs as we create new ones,” says Marisa Witcpalek, EE major and team president for the coming season. “We can pool our knowledge with classmates from other majors to create the best design possible. This reflects how engineering takes place in the real world.”

Team members are pleased with their performance, but are already preparing changes to next year’s boat.

“Our experiences this year have helped guide our goals for the future,” says Cyrus Anderson, CS major and Electrical Team lead.

In particular, a new design might have battery protection circuitry built into the boat’s custom circuit board, a vector-thrust control scheme to allow for strafing, and more powerful, custom-designed thrusters.

This sort of planning and teamwork is a valuable aspect of UM::Autonomy, and something the members greatly value.

“RobotBoat forces you into reality,” says Cyrus. “The competition is a perfect place to prove your designs are robust, since the conditions are constantly changing.”

The flexibility required to make a winning boat is not something you can find in the classroom alone, adds Marisa.

“RobotBoat is a platform that allows us to learn things that labs and class projects can’t really cover,” she says. “The scope of this project is much larger than in-class projects, and it gives us a chance to really get our hands dirty with debugging and solving real-world problems.”