EECS: Electrical and Computer Engineering
May 28, 2015
Don't let the retro arcade games and oscilloscopes fool you - Mitch's company is as modern as they come. | Short Read
Enlarge

Have you always dreamed of finding a secret lab, full of a mad scientist’s inventions and high-tech gadgets? Where only authorized personnel can see the researchers bustling between their workstations, crafting machines straight out of an old sci-fi film? And just for kicks, why not throw in a dungeon?

Quantum Signal’s Saline headquarters has it all and more. Nestled out of sight in a nearly 100-year-old school building, the entrances to this U-M Tech Transfer startup are locked to unapproved visitors. Its lab spaces and testing areas stretch on endlessly along the building’s dim hallways – even the concrete basement is put to use, complete with an electronics and machine lab. 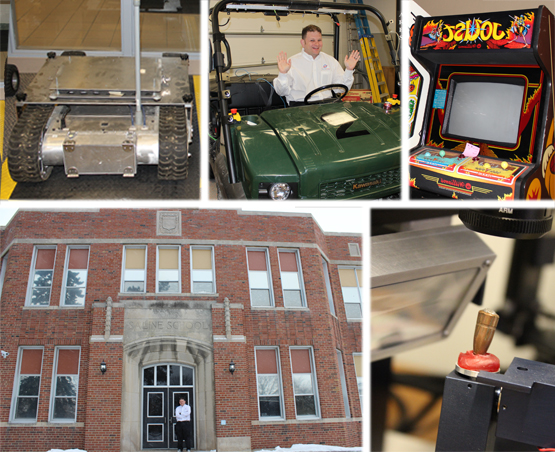 As a custom product development company, QS takes its direction both from commissioned projects and the ambitious designs of its many on-staff engineers. Mitch started the company to bring advanced signal processing technologies from the academic research lab into real-world applications.

“There are a lot of problems and organizations in the world that need signal processing and don’t know what it is,” says Mitch. “The algorithms never reach out from the ivory tower into the real world – so I thought, we should be the signal processing consulting company.”

Started in the very beginning in Mitch’s bedroom before he had even graduated, the company that became Quantum Signal focused on staying diverse. With a demand for signal processing applications in nearly every field, Mitch and his early collaborators found no shortage of corporate projects, large and small, to build a foundation. In the end, this model turned out to be a perfect workflow for the company.

“I founded Quantum for a couple reasons – I like to work with really smart people, on really hard projects, and have fun. And that’s it.”

What are these really hard projects? It would be faster to list what they’re not.

QS has its hands in nearly every hot field of the moment. Self-driving and remote controlled vehicles, wireless sensing, video game design, facial recognition, video analysis, and robotics are just some of the areas that fill the company’s endless labs and work centers. 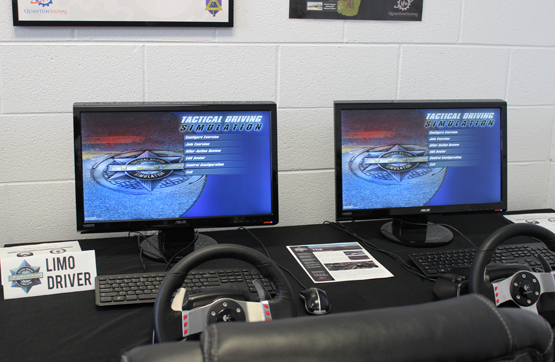 Taking a look inside the QS demo room, visitors are treated to some of the company’s most distinctive projects: a facial recognition device that analyzes what sorts of skin care products would be best for your complexion, used all around the world; a machine to recover forensic information from used badge printer ribbons, still in use by the Secret Service today; the company’s first fully in-house video game, Rustbucket Rumble; and a tactical driving simulation, whose steering wheels have a mind of their own when not in use by a human tester.

Working on both private and government contracts, the QS premises are considered a classified zone. While some of the most sensitive ongoing projects are kept under wraps, other military work is on proud display. 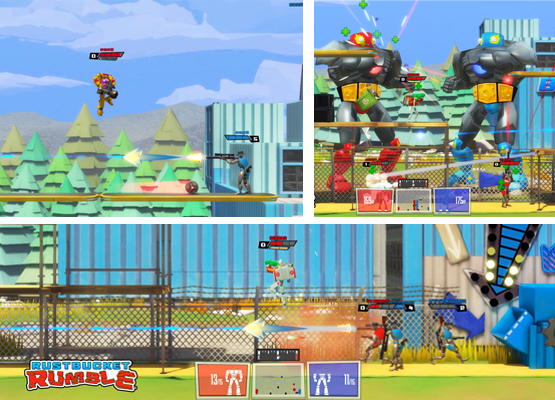 Base ADAPT is a software package that helps design field military bases through a Sim City-esque layout interface. A system for remotely analyzing bullets is under development in another lab, for times when forensic analysis in the field is dangerous or inconvenient. And if you time your visit right, you can see QS scientists field-testing their autonomous vehicles in the parking lot, to be used by the Army for reconnaissance. These made history with the first autonomous vehicle testing license plate in the State of Michigan.

Quantum Signal’s successes have translated to noticeable growth. The company’s first proper headquarters was in Ann Arbor’s Northern Brewery in 2000, and within two years they tripled their staff. While their consulting services continued to pick up, they kept an additional focus on in-house technology research. This landed the young crew a $1.83M grant from the National Institute of Standards and Technology. 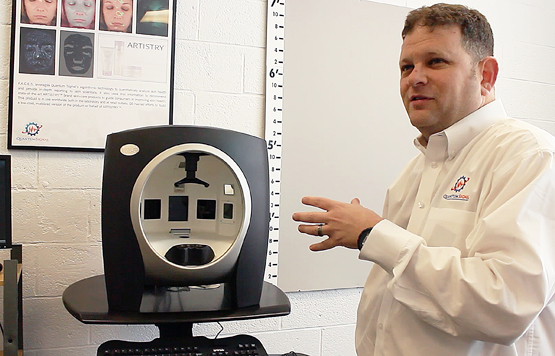 After the 2010 move to their current location in Saline’s Union School building, QS was named to Crains Detroit’s 25 Companies to Watch.

Mitch says he picked up his entrepreneurial spark while studying in the EECS department. In fact, his first business project took root in the EECS building – he was the co-founder of the IEEE bagel stand that would one day become the dB Cafe (after merging with Eta Kappa Nu’s doughnut stand).

“If you can motivate undergraduates to get up early in the morning to come sell bagels and coffee, you can probably motivate anyone.”

That and the department’s challenging, engaging atmosphere became Mitch’s driving motivation, he says.

“EECS reminds me of my company,” he says, “a lot of smart people working on hard projects and having fun. And if people aren’t having fun, then it’s their own fault. It’s a pleasurable environment, a great department, and a fun place to be.”

Invention and entrepreneurship may be his main motivations, but Mitch has a serious side passion for collecting. You don’t even need to ask him about it – just one look around QS HQ tells you all you need to know.

And what does the founder of a startup responsible for cutting edge research collect? Video games, of course.

Every meeting space, lounge, hallway, and even the gymnasium is filled with Mitch’s 150+ machines, a collection spanning 25 years of effort. Included in these are classic arcade games, as well as Scopitone machines (an early forerunner of the modern music video) and antique Wurlitzer juke boxes.

Mitch says he wants to create a fun, relaxed environment for his staff and engineers – and with video games lining every workspace, it seems he’s succeeded. 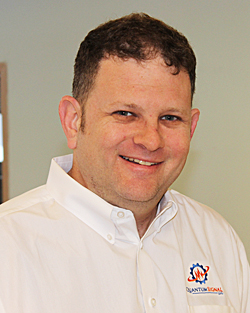 We’re looking for people who are smart and get things done. That trumps the type of degree they have or where they got it – that combination of smarts, creativity, and a proactive attitude is what’s really important.

QS is a signal processing consulting company specializing in intelligent sensing, data analysis, and visualization. Some of its products include autonomous vehicles, video games, facial recognition devices, and even a system to detect counterfeit bills.

QS employs engineers, computer scientists, artists, and designers – and even Mitch’s dad, who works as the company’s director. 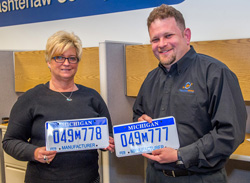 With new courses at the freshman, sophomore, and junior levels, Michigan ECE is training tomorrow’s engineers to be leaders in a diverse workforce in service to society| Long Read
In the News
BloombergAug 6, 2019
Ford Buys Defense Contractor to Get Robot Rides on the Road