‘Supercool’ material glows when you write on it

by Kate McAlpine
Michigan Engineering
May 18, 2015
A new material developed at the University of Michigan stays liquid more than 200 degrees Fahrenheit below its expected freezing point, but a light touch can cause it to form yellow crystals that glow under ultraviolet light. | Short Read
Enlarge 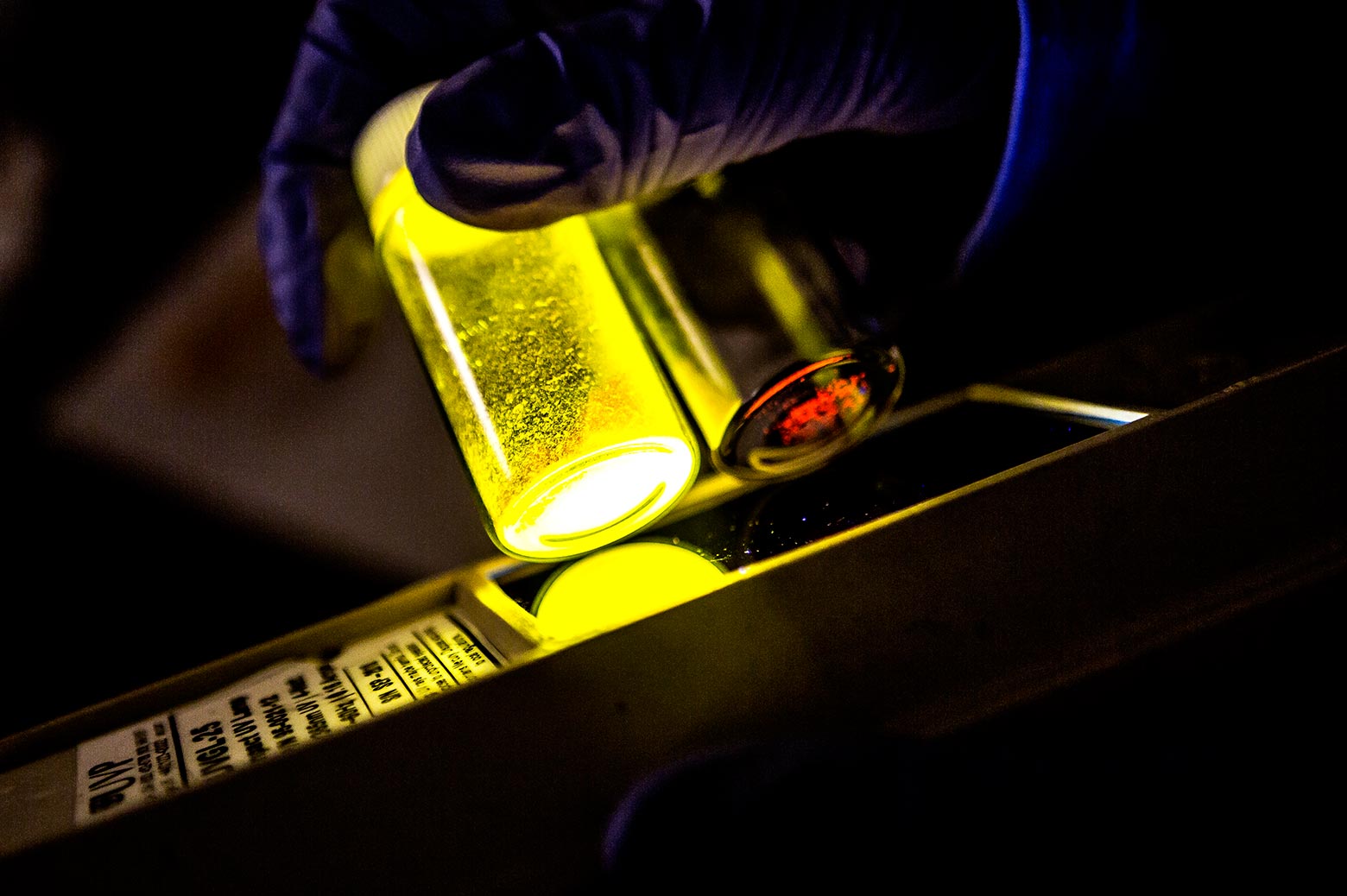 A new material developed at the University of Michigan stays liquid more than 200 degrees Fahrenheit below its expected freezing point, but a light touch can cause it to form yellow crystals that glow under ultraviolet light.

Even living cells sitting on a film of the supercooled liquid produce crystal footprints, which means that it’s about a million times more sensitive than other known molecules that change color in response to pressure.

The material could have applications as a new kind of sensor for living cells, while the mechanism behind its unusual properties may guide the development of electronics and medicines.

“As you know, water freezes around zero degrees Celsius. It changes to ice. It’s as if the water remained a liquid down to -100 degrees Celsius,” said Kyeongwoon Chung, a doctoral student in materials science and engineering and first author on the paper published today in ACS Central Science.

Electronics manufacturers are interested in glass-like, carbon-based materials – also known as amorphous, organic materials – like the one produced at U-M. These materials are cheaper, easier to work with and more flexible than inorganic semiconductors such as silicon. Because they don’t have a crystal structure that must be broken up, they also dissolve well in the body, which improves their effectiveness as pharmaceuticals.

“We would like to understand better molecular design principles to control the crystallization tendency of organic molecules,” said Jinsang Kim, an associate professor of materials science and engineering, whose group discovered the unusual molecule. “Most organic materials have a strong driving force to crystallize, but they don’t always form the same quality crystal, making quality control difficult.”

The team investigated a family of organic molecules widely used in pigments and electronic devices like solar cells, LEDs and transistors looking for ways to streamline the production of their amorphous forms. These molecules can be described as a rigid core flanked by two flexible side chains. If the chains are short, the core molecules drive crystallization, but if they are long, the chains interact to form a different kind of crystal.

Kim’s team found that by varying the lengths of the side chains, they could cause a stalemate between two modes of crystallization. “We found that the core unit and side chains are working in opposite directions,” said Kim. 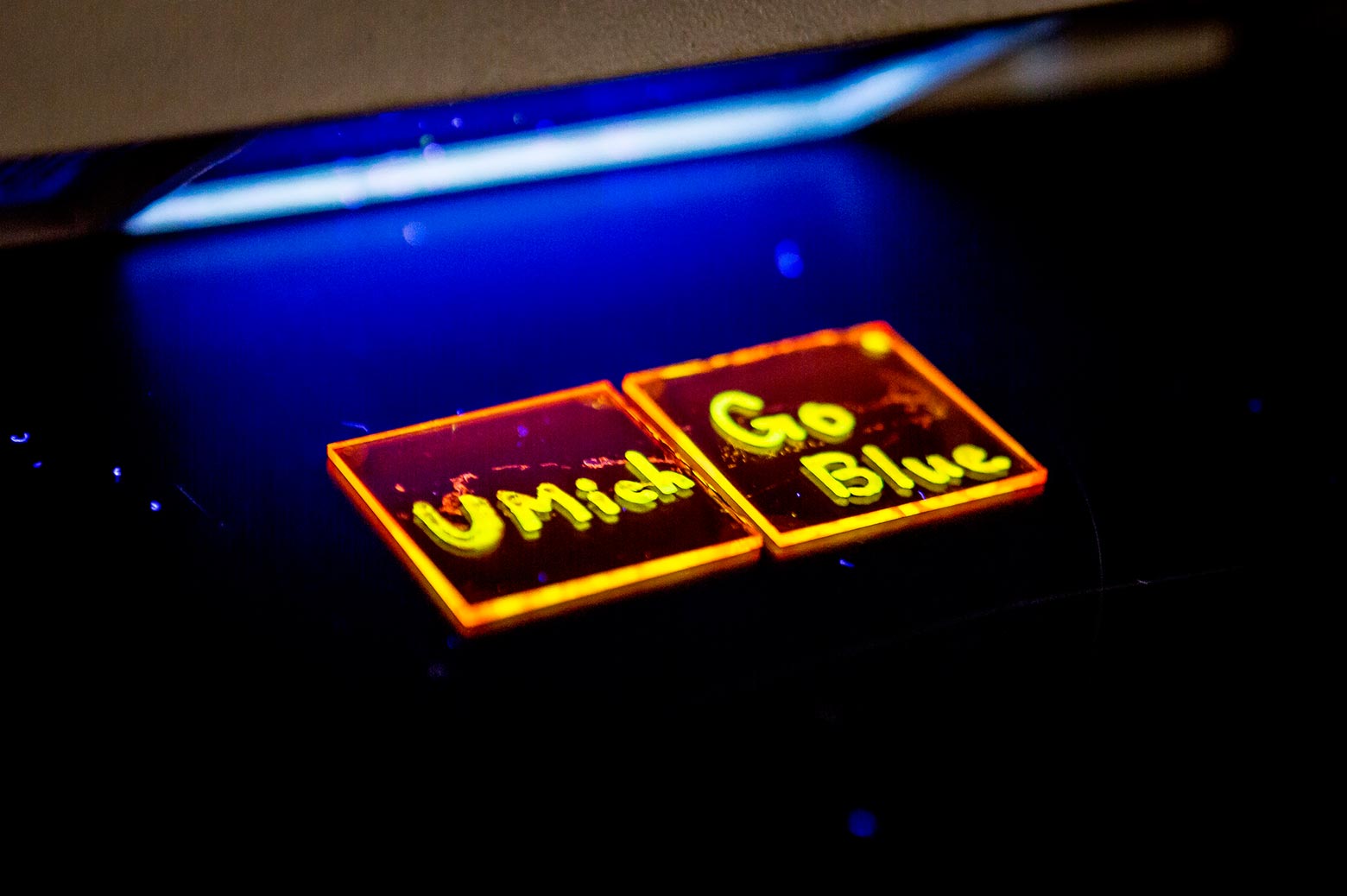 IMAGE:  Once in liquid form, the substance can stay in this state more than 200 degrees Fahrenheit bellows its expected freezing point, but can form yellow crystals that glow under ultraviolet light with light touch. Here the substance remains in the liquid state (orange), while crystals have formed after being bumped (yellow). Photo: Joseph Xu

In addition to the unusually broad temperature range for the supercooled liquid state, the group found that it crystallized when rubbed with a stylus, changing from dark red to bright yellow. The rubbing broke the stalemate between the two ways for the molecules to connect, allowing the side chains to link up.

At high temperatures around 212 degrees Fahrenheit, when the molecules moved freely, just a touch could make the entire film or droplet crystallize. “It’s like a domino effect,” said Kim.

But at room temperature, the thicker supercooled liquid crystallized only where the stylus made contact, allowing Chung to scrawl messages such as “shear-triggered crystal” or a secret note to his wife.

Kim’s group is pursuing using this molecule in biosensors, which might reveal characteristics of cells for medical diagnosis. The ability to write and erase luminescent information also suggests the potential for use in a memory that encodes information with light rather than magnetism. Such “optical memory” would require much more development.

Jinsang Kim is also an associate professor of chemical engineering, biomedical engineering, macromolecular science and engineering and chemistry. This work was supported by the Center for Solar and Thermal Energy Conversion, an Energy Frontier Research Center funded by the U.S. Department of Energy. Additional support came from the Spanish Ministerio de Economia y Competitividad, and the Institute of Basic Science of Korea. 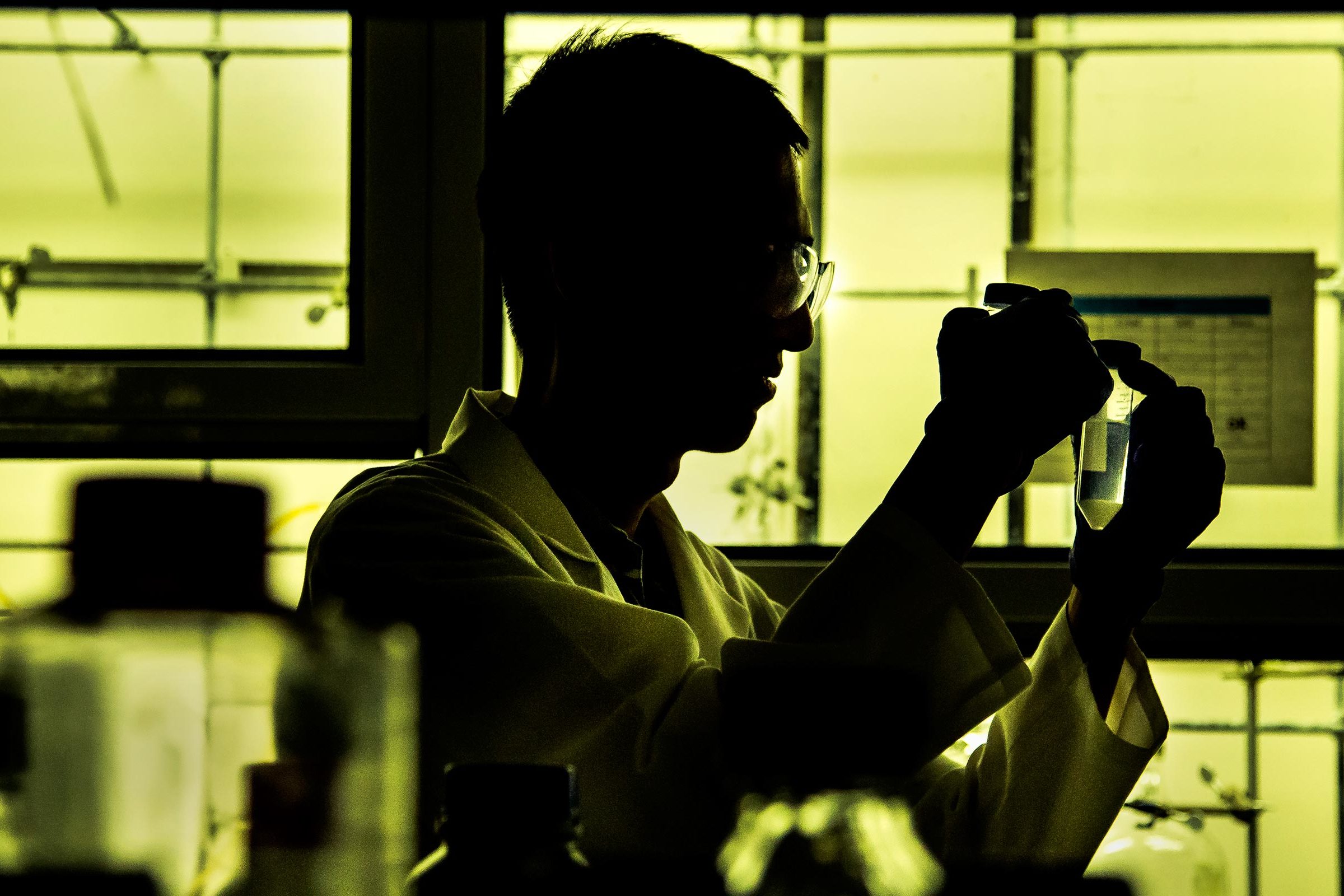