by Kate McAlpine
Michigan Engineering
May 29, 2015
Some tissue damage is too extensive for the body to heal well, such as a bad slipped disc or the muscle death that follows a heart attack, so researchers are looking for ways to bridge the gaps.| Medium Read
Enlarge 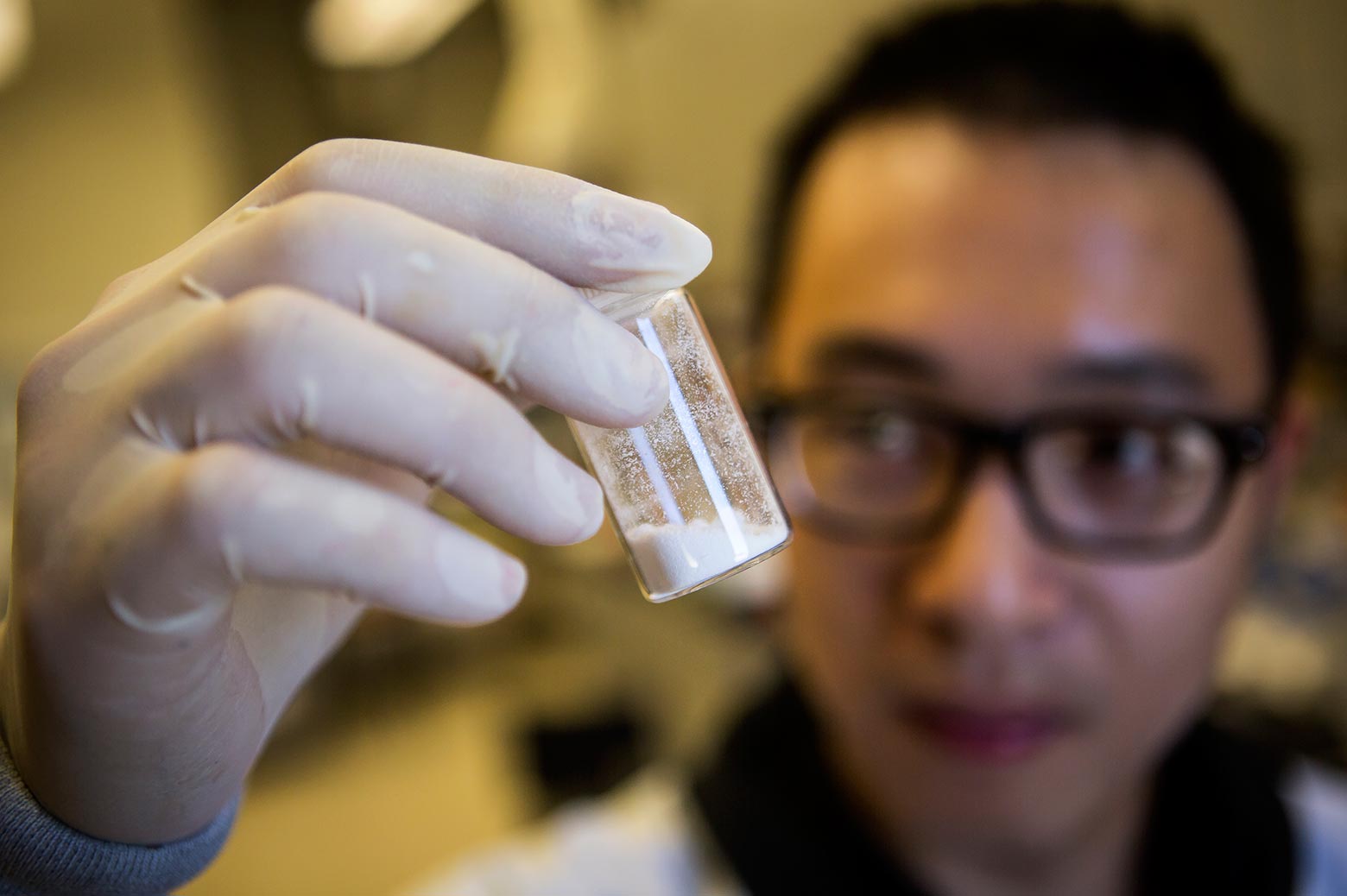 IMAGE:  Zhanpeng, BME Research Fellow and member of BME Professor Peter Ma's research group, prepares a polymer solution to construct micro particles that are able to carry stem cells. The micro particles are created from a special polymer solution that is frozen into a solid state. During the solidification process, the particles produce special structures that are able to hold stems cells that can repair tissue damage that was previously too extensive to heal. Photo: Joseph Xu

Some tissue damage is too extensive for the body to heal well, such as a bad slipped disc or the muscle death that follows a heart attack, so researchers are looking for ways to bridge the gaps. The most promising avenue is stem cell therapy, but these cells take their cues about what kind of cell to be from their surroundings.

Now, a team of researchers from the University of Michigan has developed microscopic particles that can be tailored for different parts of the body, loaded with stem cells, and injected straight into damaged tissues.

The new  “microspheres” amount to an injectable kind of scaffolding that could hold the stem cells in place while they assumed their new roles, replacing dead tissue. 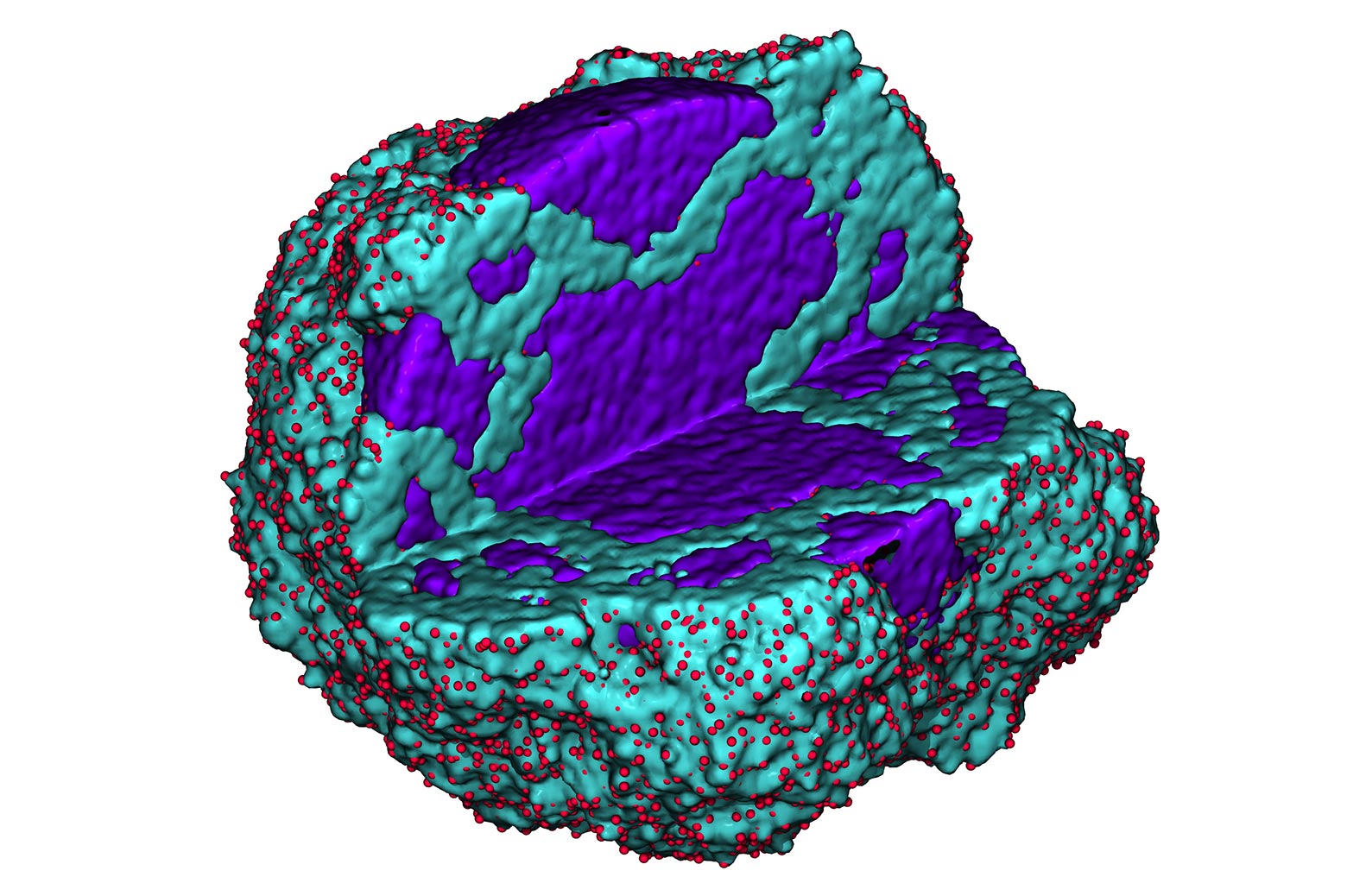 IMAGE:  In this simulation image, the teal represents the microsphere material, while the purple represents the glycerol filling in the gaps. The red dots are hydroxyl groups. Credit: Marson et al, U-M.

To make them, the researchers tweaked two aspects of the biodegradable molecules that make up the spheres, enabling the control of their solidity and fibrousness.

By simulating the structure of the target tissue, the cells can better integrate with the body, says Peter Ma, the Richard H. Kingery Collegiate Professor who led the development of the spheres.

“The degree of the hollowness and the smallness of the fibers that make up the microspheres can dramatically facilitate tissue or organ regeneration,” said Ma. “Currently, these novel microspheres are being used to regenerate intervertebral disc and heart tissues in our lab and our collaborators’ labs. If successful, we will potentially develop ways to cure low back pain and rescue patients suffering from heart attacks.”

His group previously showed that microspheres loaded with stem cells could help heal cartilage in the knees of rabbits when injected into the damaged area.

Ma’s team worked with the group of Sharon Glotzer, the Stuart W. Churchill Professor of Chemical Engineering, to discover a way to control the structure of the microspheres so that they can effectively support the repair of other types of tissue.

Then, the team tailored the nanoscale structure of the microspheres, which must mimic the network of proteins and other molecules that surround cells in the body, by plunging the mixture into liquid nitrogen at a temperature of about -321°F. If the lactic acid arms of the star-shaped polymers were too short, they formed solid microspheres. But if the arms were over about 150 to 200 lactic acids long, the polymers crystallized into fibers.

The trick to controlling the cell-scale porousness is in the hydroxyl groups, composed of a hydrogen atom and an oxygen atom stuck together, which are tacked onto the polymer. It doesn’t take many – less than one for every hundred lactic acid groups – but the hydroxyl allows the glycerol to support the microsphere structure. As a result, the polymer stars don’t feel the need to fill in every gap, leaving room for stem cells. 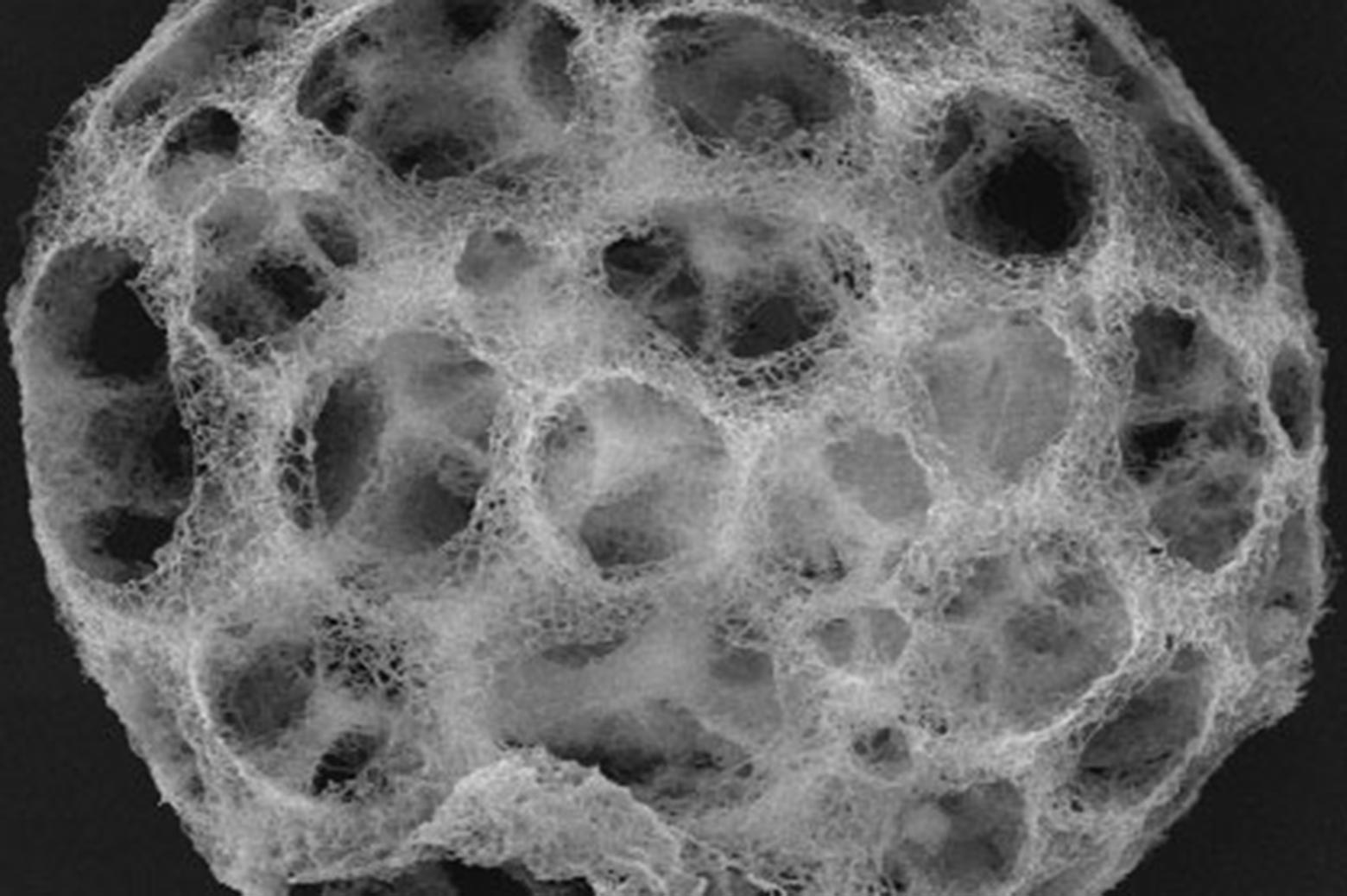 IMAGE:  A microsphere, shown in an electron microscope image, with a fibrous structure and an open network of pores. Credit: Zhang et al, U-M.

“Through manipulating the structure of star-shaped molecules, we can simultaneously control their assembly at both the nano- and microscales,” said Zhanpeng Zhang, who recently earned his doctorate in biomedical engineering, in part for his experimental work with the microspheres.

After washing out the glycerol, the team freeze-dried the microspheres for later use.

Computer simulations from Glotzer’s team confirmed that the interactions between the hydroxyl groups and the glycerol led to spongy or hollow the microspheres.

“Because the droplet assembly is so varied, we can also envision other applications such as drug delivery or catalysis, which in turn might require different kinds of nano- or micro-structure,” said Ryan Marson, who recently earned his doctorate in materials science and engineering, in part for his work on the simulations.

The research was supported by the National Institutes of Health, the Department of Defense, the National Science Foundation and the U.S. Army Research Office. 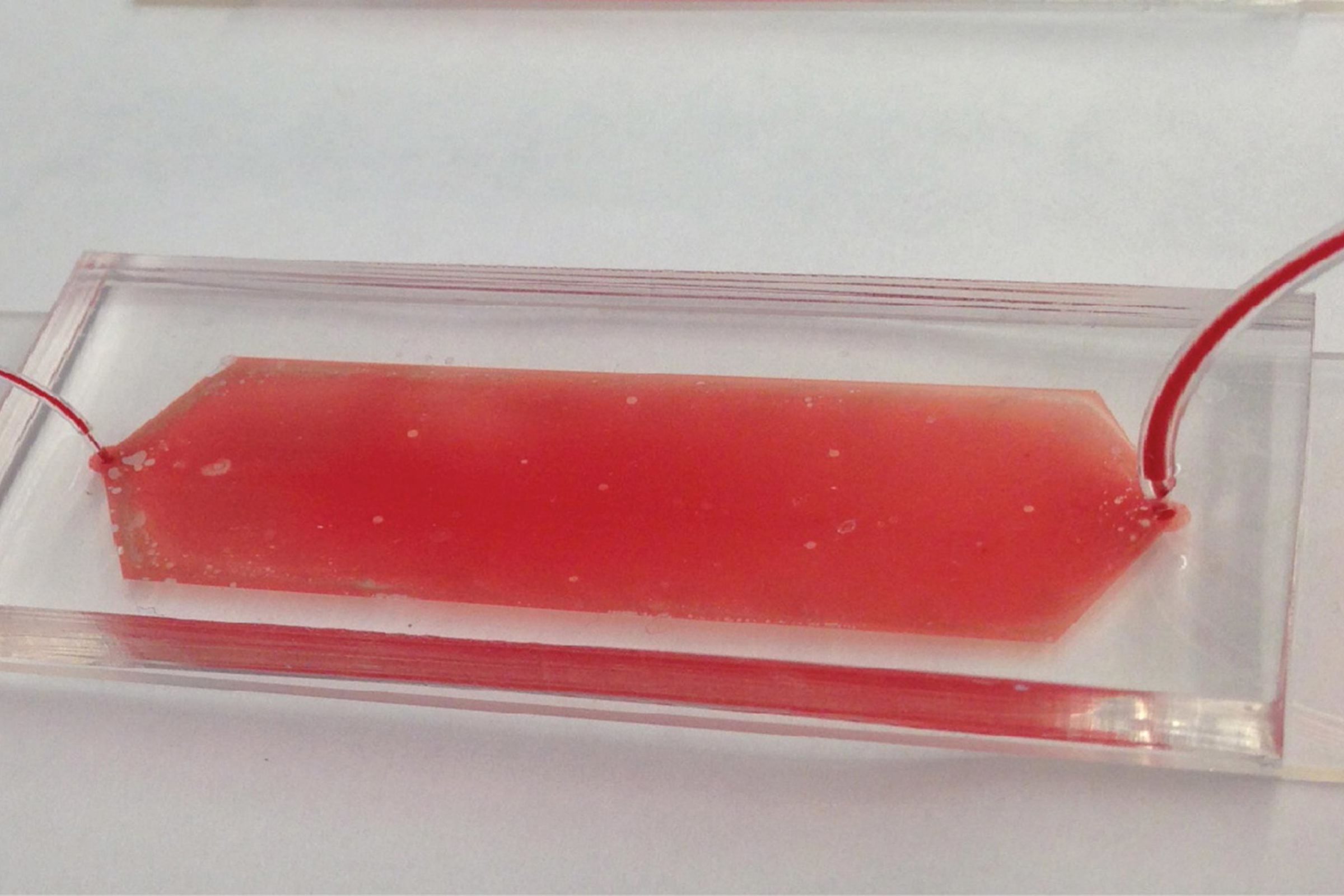 A new device developed at the University of Michigan could provide a non-invasive way to monitor the progress of an advanced cancer treatment. | Medium Read
Researchers