by Nicole Casal Moore
Michigan Engineering
May 4, 2015
Researchers have found that pollen grains might seed clouds, demonstrating an unexpected way that trees and plants might be affecting the climate. | Medium Read
The main job of pollen is to help seed the next generation of trees and plants, but a new study from the University of Michigan and Texas A&M shows that the grains might also seed clouds.

The main job of pollen is to help seed the next generation of trees and plants, but a new study from the University of Michigan and Texas A&M shows that the grains might also seed clouds.

The unexpected findings demonstrate that these wind-carried capsules of genetic material might have an effect on the planet’s climate. And they highlight a new link between plants and the atmosphere.

Pollen has been largely ignored by atmospheric scientists who study aerosols—particles suspended in the air that scatter light and heat and play a role in cloud formation.

“The grains were thought to be too large to be important in the climate system, too large to form clouds or interact with the sun’s radiation,” said Allison Steiner, U-M associate professor of atmospheric, oceanic and space sciences. “And also the large particles don’t last in the atmosphere. They tend to settle out relatively quickly.”

But Steiner and her colleagues weren’t sure that was the whole story. Sweeping a dusting off her porch one spring morning, she wondered what happens to the grains in the air. Steiner turned to the medical community. Pollen causes seasonal allergies, which affect between 10 and 20 percent of U.S. residents. 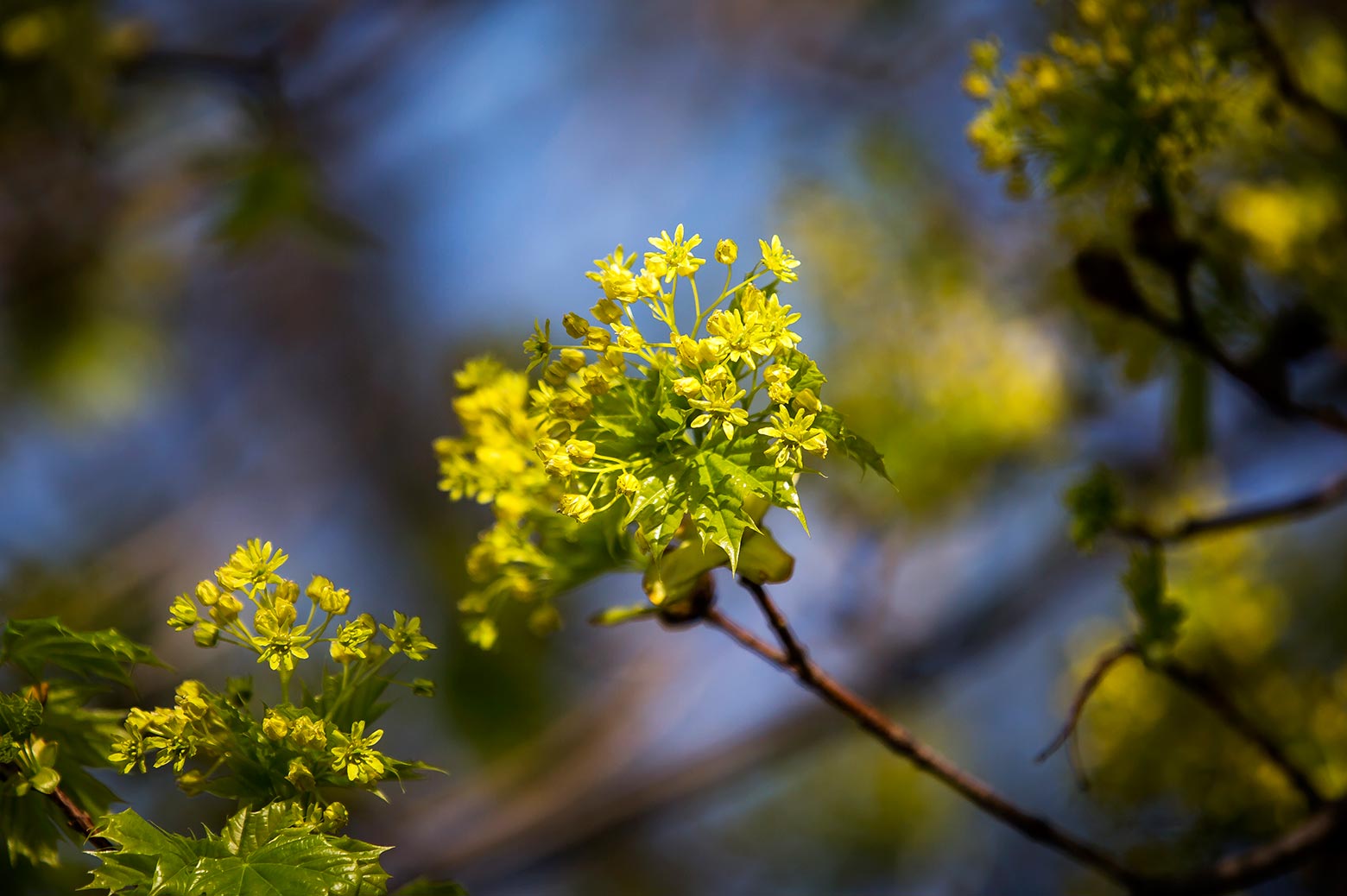 IMAGE:  A tree that holds pollen grains that Allison Steiner, an associate professor of atmospheric, oceanic and space sciences; and her team of researchers at the University of Michigan believe can seed clouds. When the pollen gets wet from these trees, it breaks down into smaller particles that can hold condensation for cloud formation. Photo: Joseph Xu

“When we were looking in the allergy literature we discovered that it’s pretty well known that pollen can break up into these tiny pieces and trigger an allergic response,” Steiner said.

Smaller grains could have big implications. The research team set out to see if moisture could cause the pieces to break down.

“What we found is when pollen gets wet, it can rupture very easily in seconds or minutes and make lots of smaller particles that can act as cloud condensation nuclei, or collectors for water,” Steiner said.

In the lab-based experiment at Texas A&M, the researchers tested pollen from oak, pecan, birch, cedar and pine trees, as well as ragweed. These are the most common sources of wind-driven pollen in the U.S. They soaked two grams from each source in pure water for an hour.

They used an atomizer to make a spray of the moist pollen fragments and sent the spray into a cloud-making chamber in the laboratory of in Sarah Brooks, a professor of atmospheric science at Texas A&M. The team found that three different sizes—50, 100 and 200 nanometers—of all six types began to pull in moisture and form clouds.

“Samples entering the cloud chamber are exposed to moist conditions representative of the relative humidity found in the atmosphere,” Brooks said. “If a sample is an effective cloud activator, droplets will rapidly grow on the sample fragments, forming large cloud droplets.”

Cloud droplets are 10 times larger than the pollen fragments, and the researchers used an optical particle counter to count them as they exited the cloud chamber.

For confirmation, they looked at the samples under a scanning electron microscope. They saw that grains that had begun as around 20-50 micrometers in size had been reduced to the nanometer size range—well within the size that can lead to cloud formation.

What happens in clouds is one of the big uncertainties in climate models right now.Allison Steiner
Tweet

“What happens in clouds is one of the big uncertainties in climate models right now,” Steiner said. “One of the things we’re trying to understand is how do natural aerosols influence cloud cover and precipitation under present day and future climate.”

And the allergy community might be interested in knowing what the particles are made of. When they ruptured, the researchers determined that they’re mostly carbohydrates and proteins.

As next steps, they plan to conduct similar studies in the field and, through computer simulations, model the potential feedback between the plant life and the atmosphere.

“It’s possible,” Steiner said, “that when trees emit pollen, that makes clouds, which in turn makes rain and that feeds back into the trees and can influence the whole growth cycle of the plant.”

A paper on the findings, titled “Pollen as atmospheric cloud condensation nuclei,” has been accepted for publication in Geophysical Research Letters, a journal of the American Geophysical Union. It is available online today. The research was supported by the National Science Foundation.