Irma Wyman: Computer pioneer and advocate for women in engineering

EECS: Computer Science and Engineering, EECS: Electrical and Computer Engineering
March 15, 2015
Her experiences led her to establish the Irma M. Wyman Scholarship at the University's Center for the Education of Women.| Medium Read
Enlarge

Irma Wyman (BSE EngMath ’49) was a pioneer in the field of computers, beginning with her work on some of the earliest programmable machines ever made. As the first female vice president at Honeywell, she knew success – but she also knew firsthand how rare she was to succeed in a field where women were scarce. Now, at 86 years of age, she remains a strong advocate for equal opportunity for women.

“I grew up being told that I would never go to college, that I shouldn’t get my hopes up, that there would be no possibility of me doing that”

recalled Irma Wyman. But then she received a Regents Scholarship to the University of Michigan. As the only recipient from her high school, Wyman felt her good fortune was probably influenced by the effects of World War II.

“The number of guys in my high school graduating class was pretty thin – so they gave it to me,” says Wyman.

Several years later, the tables would turn. WWII veterans returning from overseas flocked to universities under the GI Bill. Wyman felt pressure to justify her presence as a women in the College of Engineering. It took strength and determination to overcome discrimation from faculty and students, while working to earn living expenses. Only 2 of the approx. 7 women in her freshman class made it to graduation. Others either married or changed their major.

“I felt that if I gave up, I would be rewarding all these people who said I couldn’t do it, I shouldn’t do it,”

said Irma. Her grades were good enough to qualify her for Tau Beta Pi, the engineering honor society, but it was not yet open to women.

Upon graduation, Wyman faced a new challenge – finding a job in a field dominated by men. On top of that, many employers were seeking returned veterans who had military leadership experience.

Working with the Earliest Programmable Computers

“When I got out of school there were no jobs for women engineers,” says Wyman.

Out of necessity, she continued with a job she had as a student, assisting in research at Willow Run Research Center. At the time, she worked on manually calculating the trajectory of missiles.  During a visit to a Navy research facility, she found that they were using a prototype programmable computer to solve similar problems. It was the second programmable computer designed by Harvard.

She was hooked. After her work with the Harvard model, the National Bureau of Standards (now the National Institute of Standards and Technology) hired her to work on several different prototypes around the country. By the mid ‘50s, Wyman had experience with at least eight early computers.

“That was exceedingly rare at the time,” she says of her experience. “At this point things were strictly experimental, there were no two computers alike. Even the one you thought you knew would be different tomorrow.”

Her experience with computers led her to a position with a startup company in Boston, which was eventually acquired by Honeywell. This began a long career in management at Honeywell, leading to her eventual appointment as the company’s first woman vice president.

But she knew that the appointment was a calculated one. Honeywell had come under scrutiny for its lack of women in management after Title IX was passed. Wyman, in what she described as a seminal moment, began to address the mismatched opportunities with the company’s women’s council.

“Every man in this place knows that you have to achieve success in the incentive plan to be considered for vice president; I asked them, ‘how many of you women even know that there is an incentive plan? The answer was none.”

Her experiences led her to establish the Irma M. Wyman Scholarship at the University of Michigan’s Center for the Education of Women. The scholarship supports women in engineering, computer science, and related fields. Irma remains deeply invested in the scholarship program, and enjoys a continuing relationship with the recipients.

Her retirement in 1990 from Honeywell spawned a new career – this time in a completely unrelated field. Wyman began a career as a deacon in the Minnesota Episcopal Church, eventually serving as Archdeacon for ten years.

In 2001, Irma received the Alumni Society Medal from the College of Engineering, and in 2007, she was awarded with an honorary doctorate.

She has since dedicated much of her time and money into helping young women succeed. Irma knows the names and fields of study of each and every one of her scholarship recipients. When asked what the young women have accomplished, she can recite with barely a moment’s thought the latest update about each one’s projects, careers, and interests – which span from environmental sciences, to automotive engineering, to top secret homeland security work.

Prepare Now for the Future

“I graduated from the University of Michigan Engineering School with absolutely no computer training – because there wasn’t any,” said Wyman. “I hope that we recognize that our current engineering students are probably in the same situation. The work they’ll be doing in the future may not even exist yet – they’ll be part of making it exist.”

“It’s a fascinating world out there,” says Wyman. “If your gifts and talents fit into the engineering world, there’s a lot you can do. You can really help humanity and do good things for people.”

At 86 years of age, she lives by her words, and continues to inspire.

A Lifetime of Achievement 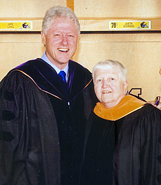 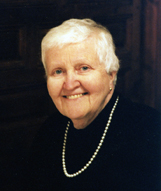 Irma Wyman (UM Center for the Education of Women)

About the header image:

The men in the image were from the Treasury’s punched card U. S. Savings Bond division. They were tring to understand how a computer could help them manage the business. According to Irma Wyman, most of them were not familiar with the binary number system.