A groundbreaking semiconductor compound is bringing fresh momentum to the field of spintronics, a new breed of computing device that may lead to smaller, faster, less power-hungry electronics. Created from an entirely new “low symmetry” crystal structure, the compound is the first to build spintronic properties into a material that’s stable at room temperature and easily tailored to a variety of applications. It could eventually be used as the base material for spintronic processors and other devices, much like silicon is the base for today’s computing devices. The new compound is detailed in a paper published online in the Journal of the American Chemical Society. It will also be published in a forthcoming print version. 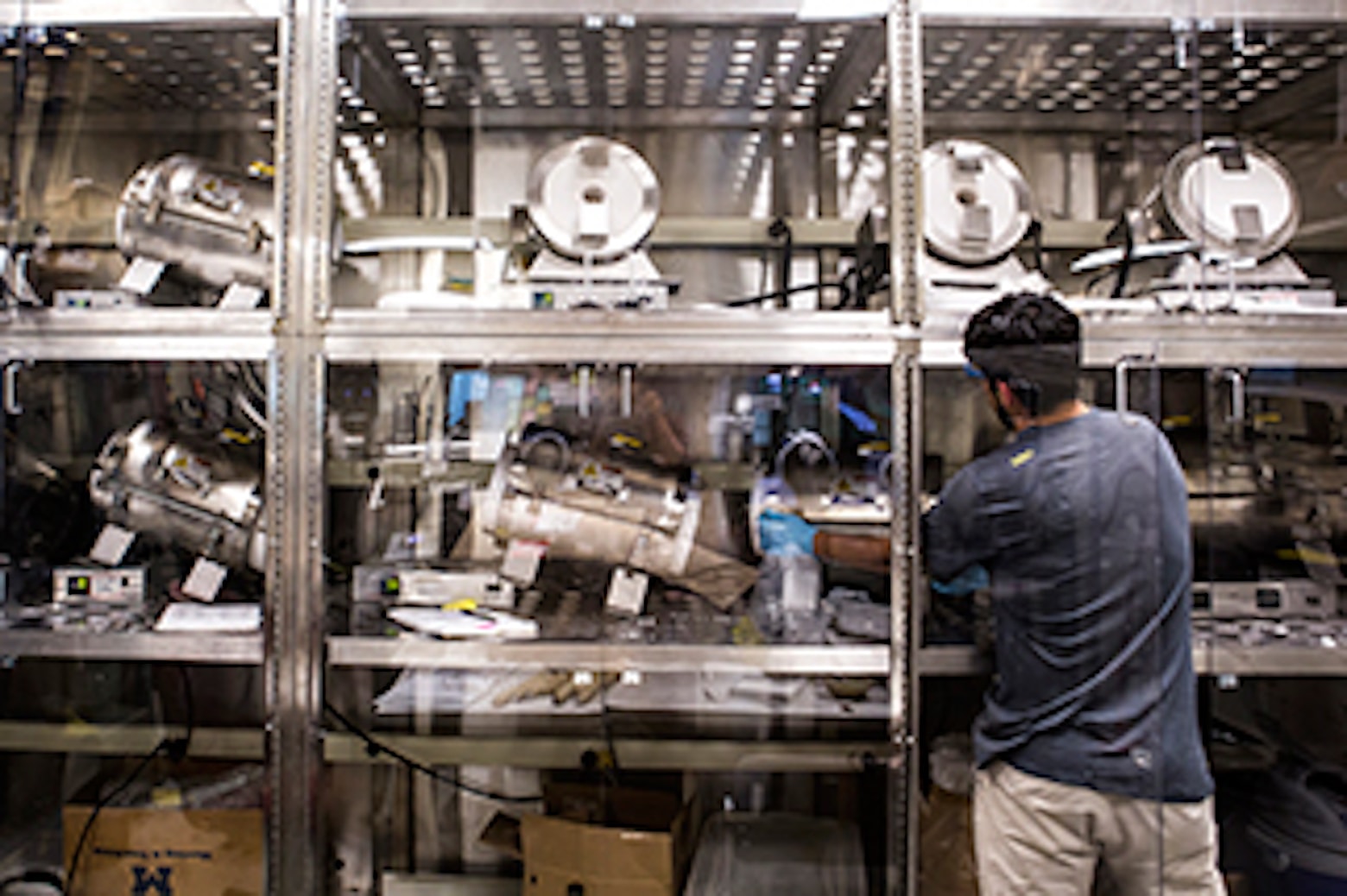 Spintronics use both the presence or absence of electrical charge and the “up” or “down” magnetic spin of electrons to store information, where today’s electronics use only electrical charge. Spin-based circuits can be smaller than charge-based circuits, enabling device makers to pack more circuits onto a single processor. This is a key advantage, since traditional electronics are approaching their physical size limits.

“You can only make an electronic circuit so small before the charge of an electron becomes erratic,” said Ferdinand Poudeu, an assistant professor of materials science and engineering department at the University of Michigan “But the spin of electrons remains stable at much smaller sizes, so spintronic devices open the door to a whole new generation of computing.”

Spintronics can also retain data even after power is shut off, unlike today’s processors and computer memory. This may enable device makers to combine functions that require separate components in today’s computing devices. For example, instead of using a processor to make calculations, RAM memory for primary storage and a hard drive for secondary storage, a single spintronic chip could handle all three functions, dramatically reducing the size and power consumption of computers.

A groundbreaking new semiconductor compound may lead to smaller, faster, less power-hungry electronics. It’s the first to build spintronic properties into a material that’s stable at room temperature and easily tailored to a variety of applications.

But spintronic semiconductors require precise control over both magnetism and conductivity in order to control both the spin and the charge of electrons. Researchers have struggled to create a semiconductor that can be easily “tuned” to the levels required and that maintains its properties over a range of temperatures. Poudeu explains that the root of the problem lies in the crystalline structure that makes up semiconductors.

“Today’s semiconductors are made of crystals with simple, symmetrical patterns, like a microscopic lattice that repeats over and over. We control the properties of those semiconductors by adding atoms of different elements to the holes in that lattice. For example, we can add bismuth to increase conductivity, or iron to increase magnetism,” he said. “To make spintronic semiconductors, we need to add atoms of different sizes, and we need flexibility in where we place those atoms. But in most commonly used crystals, the holes are all similarly sized and regularly spaced. That gives us a very limited amount of control.”

Researchers have been working for years to solve this problem by finding new ways to add atoms to commonly used crystalline structures. But Poudeu’s team took a different approach, creating an entirely new structure. They used a mixture of iron, bismuth and selenium to create a complex crystal that offers much greater flexibility. The new structure looks more like Swiss cheese than a lattice, with holes of varying size placed at varying distances in multiple, overlapping layers.

“Ordinarily, conductivity and magnetism are linked together, so you can’t change one without affecting the other,” said Juan Lopez, a doctoral student in materials science and engineering who worked on the project. “But this new compound changes that. It enables us to arrange atoms in a huge number of different combinations so that we can manipulate conductivity and magnetism independently. That level of control is going to open a whole new set of possibilities in spintronics.”

Thus far, the team has only created and tested the new compound in powder form. The next step is to manufacture it in the thin film that would be required for a spintronic device. Lopez believes that this may be feasible within a year.

The paper is titled “Coexistence of High-T Ferromagnetism and n-Type Electrical Conductivity in FeBi2Se4.” It will be published in a forthcoming print edition of the journal. This work was supported by the National Science Foundation and the U.S. Department of Energy, Office of Basic Energy Sciences.