EECS: Electrical and Computer Engineering
January 8, 2015
Alexandria ran on the platform of women in STEM, and exhibited her singing talent from an extensive musical and dance background. | Medium Read
Enlarge

From operettas to oil refineries to pageants, Alexandria Strother has done it all. This year’s Miss Washtenaw County and Electrical Engineering and Vocal Performance major, Alexandria works to bridge her many different worlds with a lot of ambition and creative problem solving.

With no previous pageant experience, the Ann Arbor native was skeptical when she was first approached about trying Miss WC. But, with some extra free time this fall, she decided to dive in.

“I did this on a complete whim,” she says. “What’s the worst that could happen? I spend a day dressed up in girly dresses, why not?” 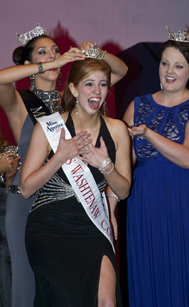 Alexandria ran on the platform of women in STEM, and exhibited her performance talent from an extensive musical and dance background, singing “Credete al mio dolore” from Handel’s Alcina. Even so, the win took her by surprise.

“I thought at most maybe I’d be fourth runner up,” she says. “It’s been a great ride, not something I at all expected to be doing with my time.”

But the most exciting outcome for Alexandria wasn’t the crown; she’s just happy to be able to act on her platform.

“The thing that’s been so amazing about [Miss WC] is that it’s given me a voice,” she says. While before she’d worked through SWE and other day events to expose STEM fields to young students, her title has given her access she previously only dreamed of. “It was really hard to get people to listen to ‘Alexandria.’”

Miss Washtenaw County, on the other hand, has gotten the attention of many local schools. After her win, Alexandria reached out in an effort to meet with and speak to area students about STEM. She’s been invited to science fairs, individual classes, and even all-school assemblies to discuss STEM’s opportunities.

“When I was younger, I had no concept of what an engineer was,” she explains. “So I go to classrooms and go through what STEM is and what different things you can do in STEM.

“A big part of my platform is that you don’t need to push women into STEM, you just need to show all people at a young age that it’s cool and there’s a reason why you should do this.”

In her efforts to grab the attention of her young audiences, Alexandria highlights the many real world experiences her engineering major has exposed her to – from friends working at such well-known companies as SpaceX and Intel, to her own accomplishments outside the classroom. 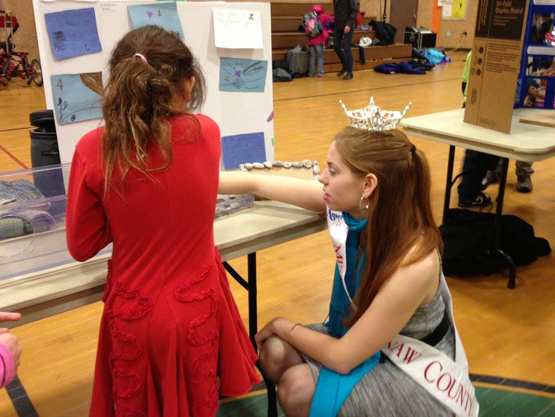 IMAGE:  Alexandria views a young student's science fair project. Alexandria judged the students' entries as part of a series of school visits focused on encouraging youth to consider STEM careers. Her platform as Miss Washtenaw County is women in STEM.

Alexandria worked for two consecutive summers as an intern at a BP oil refinery in Whiting, Indiana. The first summer solidified her interest in power, she says, after getting her hands on some high intensity equipment.

That big power is looking to keep her busy for a while – she’s already planning to spend a third summer with BP before her fifth and final year of school, and may even look to full-time employment there afterwards.

The relocation would be convenient for her diverse interests. The refinery is close to Chicago, where she could live and pursue musical theater and other performance avenues. 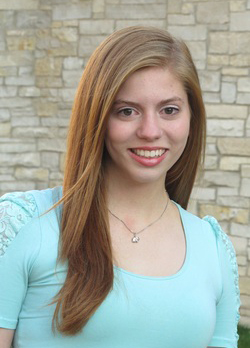 The prospect of maintaining her two passions in tandem is one of the offer’s best selling points, she says. So far, the two contrasting fields of study have not been daunting to Alexandria. In fact, she revels in finding common ground between her EE and performance work.

Perhaps the greatest challenge in her pursuits has been time management. With two majors come many activities. For Alexandria, this has included a term as president of the U-M Gilbert & Sullivan Society, choreographing two U-M operas and next semester’s main stage opera, Giulio Cesare, performing in shows with the Ann Arbor Civic Theater, and membership in SWE and HKN.

Currently, Alexandria is preparing for her senior recital and continuing her discussion series at local schools. She has two more years of eligibility for local pageants, and plans to keep going with them for as long as she’s able. She’s even eyeing the Miss Michigan title.

From the theater to the refinery, Alexandria will continue to find creativity in every opportunity.