by Gabe Cherry
Michigan Engineering
January 29, 2015
Made by a team of University of Michigan engineers, the “hedgehog particles” are named for their bushy appearance under the microscope. | Medium Read
Enlarge 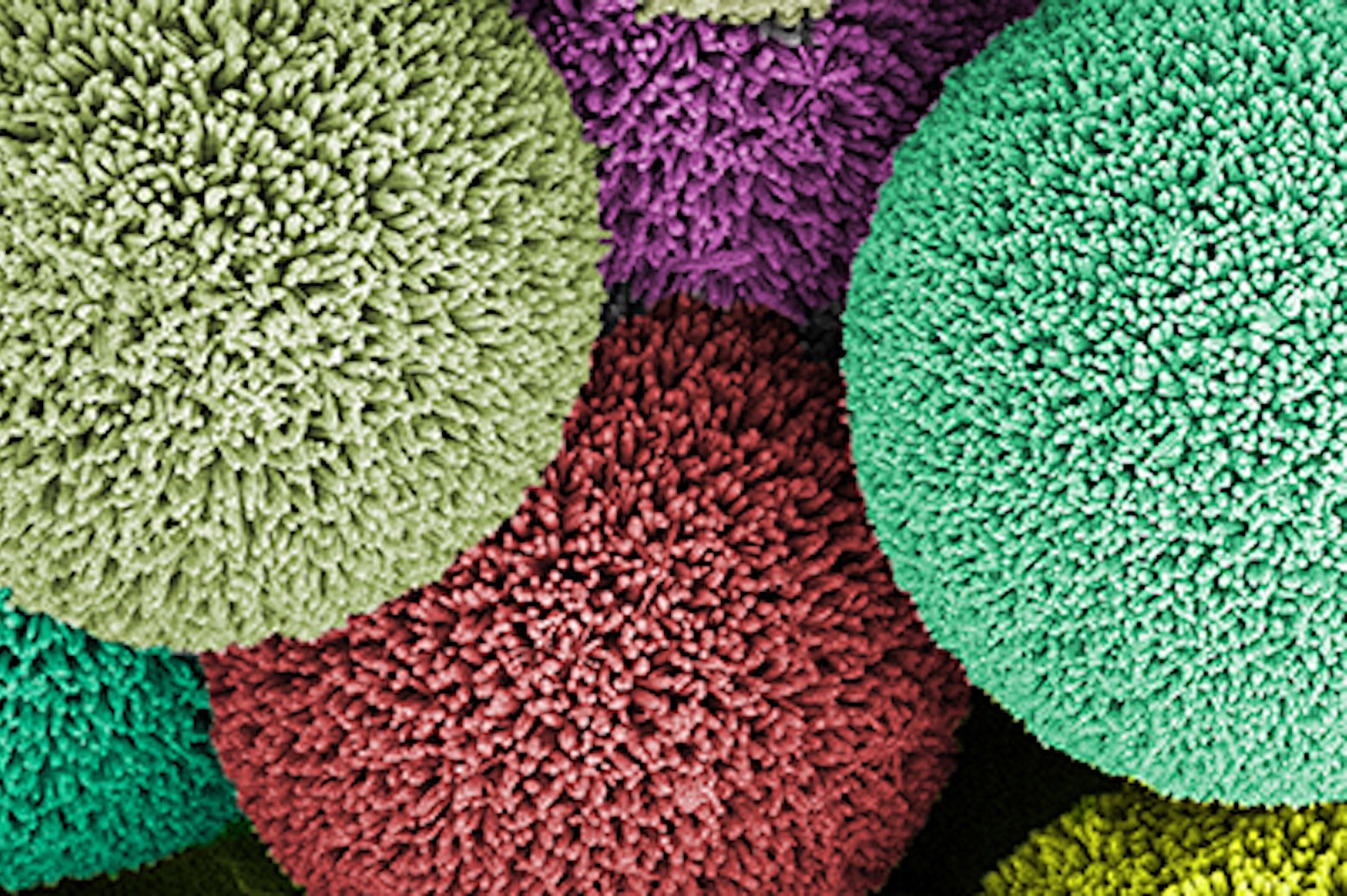 A new process that can sprout microscopic spikes on nearly any type of particle may lead to more environmentally friendly paints and a variety of other innovations.

Made by a team of University of Michigan engineers, the “hedgehog particles” are named for their bushy appearance under the microscope. Their development is detailed in a paper published in the Jan. 29 issue of Nature. 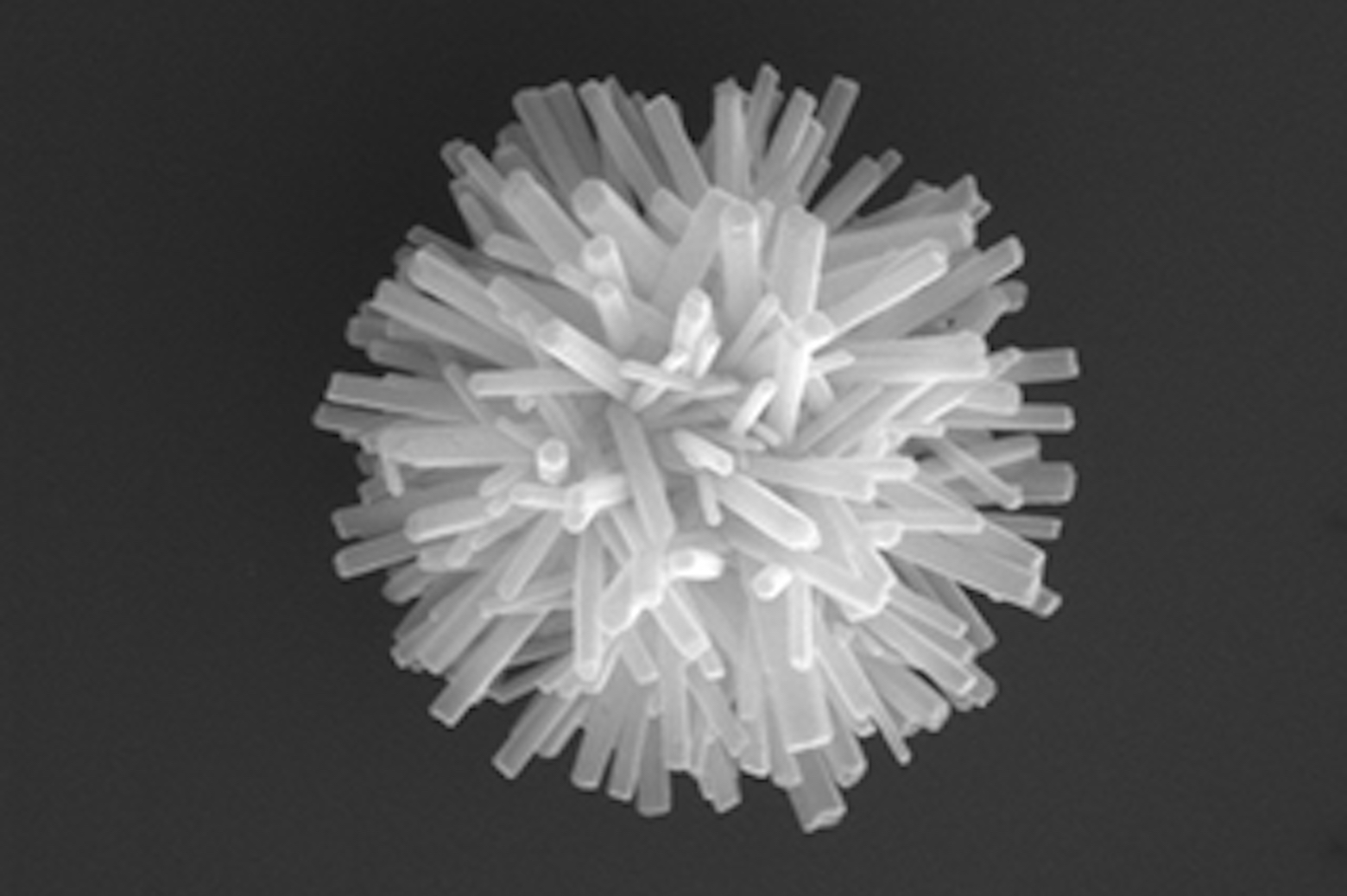 The unusual behavior of the hedgehog particles came as something of a surprise to the research team, said Nicholas Kotov, the Joseph B. and Florence V. Cejka Professor of Engineering.

“We thought we’d made a mistake,” Kotov said. “We saw these particles that are supposed to ‘hate’ water dispersing in it and we thought maybe the particles weren’t hydrophobic, or maybe there was a chemical layer that was enabling them to disperse. But we double-checked everything and found that, in fact, these particles defy the conventional chemical wisdom that we all learned in high school.”

The team found that the tiny spikes made the particles repel each other more and attract each other less. The spikes also dramatically reduce the particles’ surface area, helping them to diffuse more easily.

One of the first applications for the particles is likely to be in paints and coatings, where toxic volatile organic compounds (VOCs) like toluene are now used to dissolve pigment. Pigments made from hedgehog particles could potentially be dissolved in non-toxic carriers like water, the researchers say.

This would result in fewer VOC emissions from paints and coatings, which the EPA estimates at over eight million tons per year in the United States alone. VOCs can cause a variety of respiratory and other ailments and also contribute to smog and climate change. Reducing their use has become a priority for the Environmental Protection Agency and other regulatory bodies worldwide.

Spikes grown on the surface of nano-scale particles enable a host of innovative possibilities.

“VOC solvents are toxic, they’re flammable, they’re expensive to handle and dispose of safely,” Kotov said. “So if you can avoid using them, there’s a significant cost savings in addition to environmental benefits.”

While some low- and no-VOC coatings are already available, Kotov said hedgehog particles could provide a simpler, more versatile and less expensive way to manufacture them.

For the study, the team created hedgehog particles by growing zinc oxide spikes on polystyrene microbeads. The researchers say that a key advantage of the process is its flexibility; it can be performed on virtually any type of particle, and makers can vary the number and size of the spikes by adjusting the amount of time the particles sit in various solutions while the protrusions are growing. They can also make the spikes out of materials other than zinc oxide. 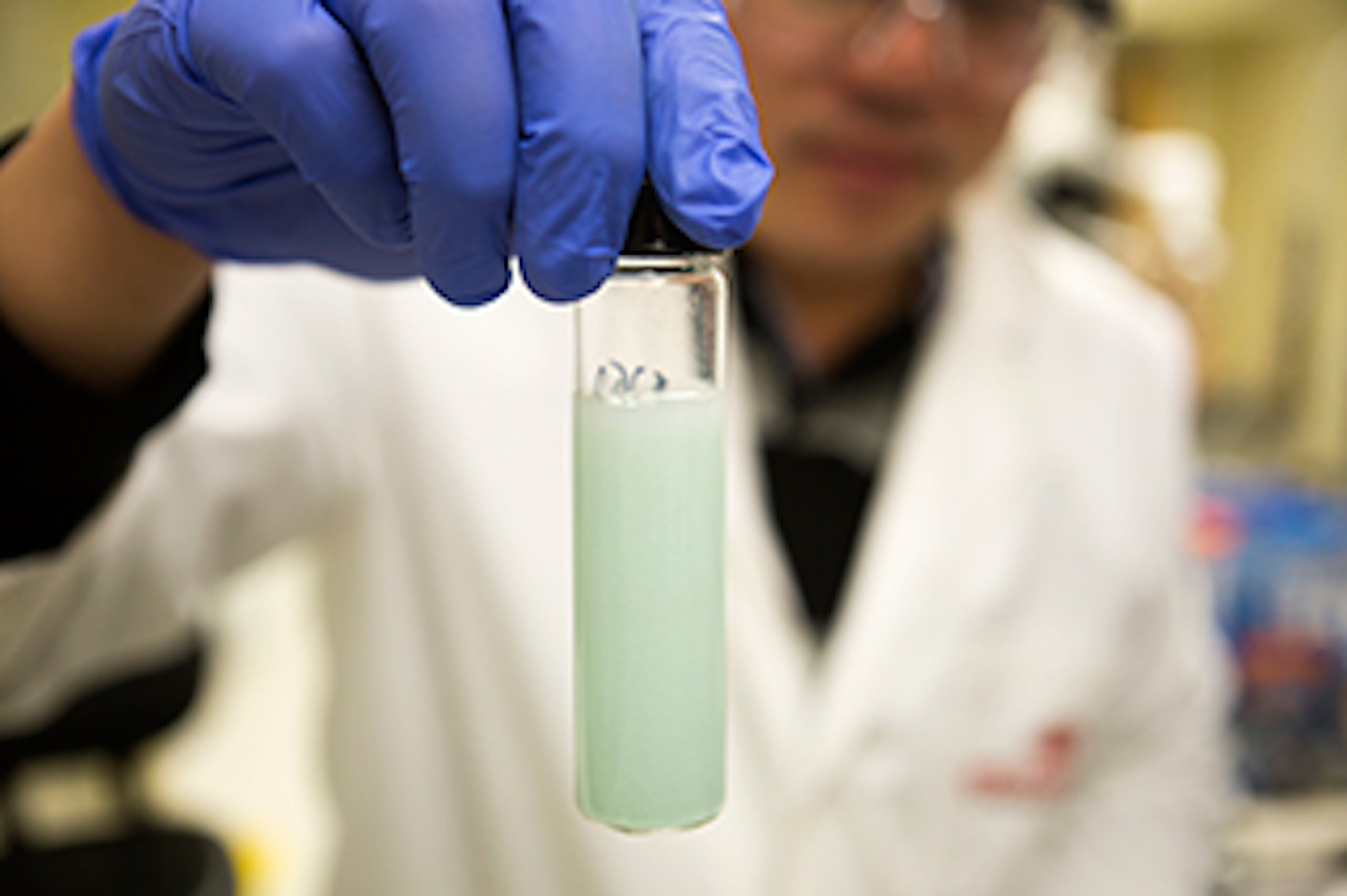 “I think one thing that’s really exciting about this is that we’re able to make such a wide variety of hedgehog particles,” said Joong Hwan Bahng, a chemical engineering doctoral student. “It’s very controllable and very versatile.”

The researchers say the process is also easily scalable, enabling hedgehog particles to be created “by the bucketful,” according to Kotov. Further down the road, Kotov envisions a variety of other applications, including better oil dispersants that could aid in the cleanup of oil spills and better ways to deliver non-water-soluble prescription medications.

“Anytime you need to dissolve an oily particle in water, there’s a potential application for hedgehog particles,” he said. “It’s really just a matter of finding the right commercial partners. We’re only just beginning to explore the uses for these particles, and I think we’re going to see a lot of applications in the future.”

Kotov is also a professor of chemical engineering, biomedical engineering, materials science and engineering and macromolecular science and engineering. The paper is titled “Anomalous Dispersions of Hedgehog Particles” and based upon work partially supported by the Center for Solar and Thermal Energy Conversion, an Energy Frontier Research Center funded by the U.S. Department of Energy, Office of Science, Office of Basic Energy Sciences. Support has also been provided by the NSF and the US Department of Defense.