The future of multimedia experiences

EECS: Electrical and Computer Engineering
December 16, 2014
Tang and Evans turned to Kickstarter to raise money for a prototype of their headphones—they were hoping for $250,000, but ended up raising $1.5 million. | Short Read
Enlarge 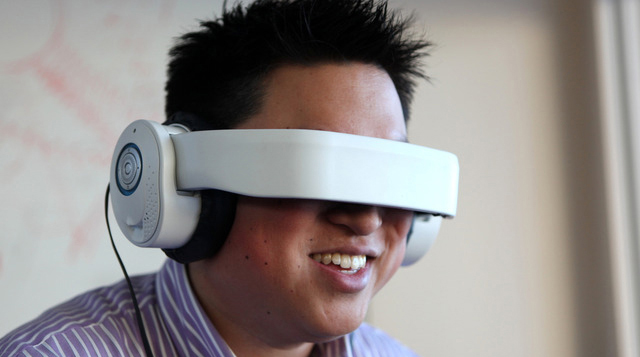 When Ed Tang (BSE EE ’11) and Allan Evans (MS PhD EE ’07 ’09), turned to Kickstarter earlier this year to raise money for a new prototype of their premium headphones, they were hoping for $250,000. They surpassed their goal in less than four hours and ended up raising $1.5 million in a mere 30 days.

“It was like ordering flowers for your girlfriend and getting the entire store,” said Tang, CEO of Avegant, the company he and Evans created to develop, produce, and market the headphones, which they’ve named the Glyph.

With the addition of Neil Welch, MS’03, PhD’08, Avegant’s vice president of engineering, they built the first Glyph prototype, securing initial investments from friends and family. By the time they made their pitch on the Kickstarter website, their prototype had already received rave reviews at the 2014 Consumer Electronics Showcase and earned a CES Editor’s Choice Award from USA Today. It was one of only four chosen for the award out of nearly 250,000 products on display.

The Glyph is a personal theater with virtual retinal display (VRD), which makes its optics extremely bright and sharp. Evans, the company’s chief technology officer, developed the idea for the VRD technology while he was working on a project for the military at Pacific Northwest National Laboratory.

“You can wear the Glyph like headphones and use them like headphones, but when you want to engage in video, simply flip down the headband and you’re immersed in your own theater,” said Tang.“Rather than viewing an actual screen, the user is looking at a reflection of light off of millions of micromirrors.”

The experience is equivalent to seeing an 80-inch high definition TV screen. They envision being able to ship the product in mid-2015.

Tang, who met Evans while working in the clean room at the Lurie Nanofabrication Facility on North Campus, said he was lucky to get involved in research from the very beginning of his college career. “As a freshman, I started out as a work-study student in the Lurie Nanofabrication Facility. My experience there allowed me to work hand-in-hand with some of the top faculty and researchers in the world.”

“We’re truly a team, and we wouldn’t be where we are today without U-M and what we all learned there,” Tang said. The team is also looking toward tomorrow. 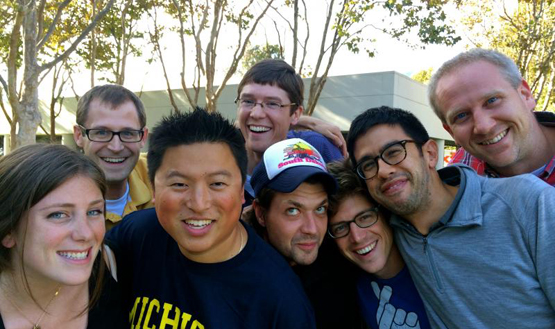 Evans, for one, doesn’t want to limit the Glyph to multimedia entertainment. While working on his degrees in electrical engineering, he developed an implantable drug delivery device for the treatment of chronic pain and two patents based on his research with medical devices. “Now I’m looking at ways to expand the Glyph into the area of vision medicine.”

Such success often breeds more success—after the Kickstarter campaign, they received $4 million in VC funding, $2 million of which came from Intel. As the company makes plans for its future, it remains true to its past.
“Starting Avegant in Michigan was one of the best decisions we could have made. We had access to a top engineering school, manufacturing structures, and an international airport. Plus, I just love Ann Arbor.”