EECS: Electrical and Computer Engineering
November 6, 2014
His paper detailed his use of big data analysis to solve a major problem of cyber security.| Short Read
Enlarge 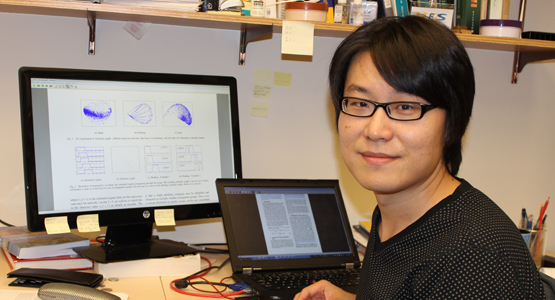 Yang Liu, Ph.D Candidate in Electrical Engineering:Systems, earned a Best Applications Paper Award from the ACM/IEEE International Conference on Data Science and Advanced Analytics (DSAA2014) for his recent research on phishing. His paper, “Detecting Hidden Propagation Structure and Its Application to Analyzing Phishing,” detailed his use of big data analysis to solve a major problem of cyber security.

Phishing is a type of cyber crime wherein the perpetrator seeks sensitive information by disguising themselves as something safe. These attacks, Yang explains, can involve replacing the contents of safe web pages with harmful data, and the attacker can often attack different members of a network from one domain while constantly changing its IP address to avoid detection. This behavior is called fast-flux.

Yang and his advisor, Professor Mingyan Liu, set out to identify patterns in this phenomenon using a huge set of real data from past phishing campaigns. Identifying a pattern would enable identification of such an attack in real time, instead of relying on after-the-fact data to learn about the nature of an infection.

Yang and Prof. Liu were able to visualize the spread, or propagation, of a phishing attack with 2D models. Their research group is one of the first to approach the problem of phishing from both a Big Data and a cyber security perspective, making this a very promising lead for future study.

IMAGE:  Yang and Minyang compared what the spread of three different kinds of malicious attacks on networks looks like visually. They focused on phishing, the second illustration.

“This is a very hot area,” he says. “The government, Google, and Facebook are all investing in this kind of research.” The Department of Homeland Security funded this project.

Mr. Liu has received a master’s degree in EE:Systems and Applied Mathematics from Michigan. He has published or presented more than a dozen research papers at professional conferences.