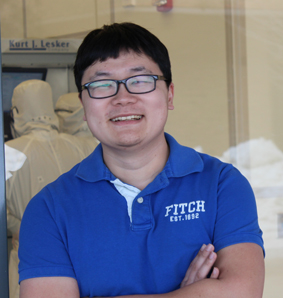 What makes Kyusang’s process truly unique is that it recycles the wafer multiple times without affecting the performance of the device. This is a major breakthrough since the price tag for a typical GaAs wafer is $20k/m2, which severely limits its applications for large area devices such as displays and solar cells.

Kyusang uses a technique called non-destructive epitaxial lift-off to separate the device from the wafer by etching a sacrificial layer. The resulting device can then be formed into any shape and mounted on a thin plastic substrate.

A particularly promising application for these recyclable wafers is in solar cells. Thin-film f III/V devices make photon recycling possible by using integrated mirrors to reflect photons back into the device.

And unlike conventional silicon, III/V materials can be “tuned” to specific frequencies of light. Tandem solar cells take advantage of this tunability by stacking variably tuned layers. Each layer absorbs a different frequency of light making the solar cells incredibly efficient.

Kyusang was the lead author of the paper, “Epitaxial lift-off of GaAs thin-film solar cells followed by substrate reuse,” and won the Best Student Presentation Award at the 2012 IEEE Photovoltaic Specialists conference when he presented the research. He was also lead author of the paper, Non-Destructive Wafer Recycling for Low-Cost Thin-Film Flexible Optoelectronics, published in Advanced Functional Materials, Volume 24, Issue 27, July 16, 2014.

He is co-author on 2 U.S. patents related to flexible photovoltaic devices.

Kyusang is as much a leader of people as he is a leader in flexible electronic technology.

After receiving his B.S. EE from Korea University, he served as an Officer in the South Korean Navy and trained new officers on the Navy’s computer controlled command systems.

In 2013, the U-M Nanotechnology and Integrated Microsystems Student Association (NIMSA) recognized Kyusang with an Outstanding Leadership Award for the help he provided researchers in the Lurie Nanofabrication Laboratory.

To escape the pressures of his research, Kyusang gets back to nature by camping in Northern Michigan and the UP (Upper Penninsula of Michigan).

“I love Michigan summers. Usually, I go camping in state parks, and I enjoy the beautiful lakes all over up north. My favorite places to travel have to be Pictured Rocks Lakeshore, Sleeping Bear Dunes and Mackinac Island.” Kyusang said.