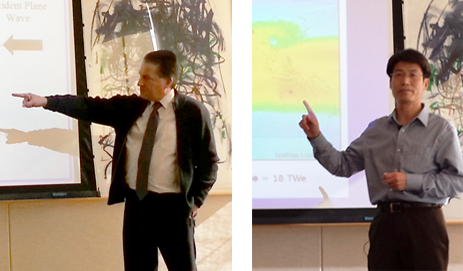 Professors Stephen Rand and Jay Guo delivered presentations for the November Meeting of the North Campus Sustainability Hour on the topic of solar energy and its future. The professors addressed two very different problems the industry faces with current technology.

IMAGE:  One problem with traditional photovoltaic technology is that solar cells convert less energy into electricity than heat.

To combat this shortcoming, Rand’s research group has developed what they call an “optical capacitor,” which would transform light into power through any transparent medium. The benefits of this developing technology include a potentially high efficiency power source that doesn’t absorb light or create excess heat, and that can operate with incoherent light. In addition, this form of energy conversion may lend itself to power transmission without the need for transmission lines.

This project is being researched at the recently-established Center for Dynamic Magneto-Optics, or DYNAMO. The program is a Multi-University Research Initiative set to continue its work for five years. [Read more about the program.]

Prof. Jay Guo was next to present, “Solar Energy Colors Our Lives.” He discussed his work to tackle aesthetic obstacles to solar energy’s widespread use.

This approach to solar cell technology should overcome some of the decorative deterrents homeowners, neighborhoods, and companies have to installing large solar technology outside their buildings. [Read more about this research]

Guo’s motivation is cutting down household energy waste, he said.

“A 100W lightbulb, running continuously for a year, uses 700 lbs. of coal,” he told the audience.

While he advocated for less wasteful power use, his hope is that eventually sustainable energy sources will eliminate the burning of fossil fuels entirely.

Both professors are eager to continue their research, and hope to see their new technologies put to use in bigger ways in the future.

“New science is relevant to sustainable power generation,” Prof. Rand said. “There are problems that need to be solved. We need new ideas and educational tools.”