Tal Nagourney is a bit of an explorer. His journeys include a 13k mile, three-month drive across the country, and a month-long solo tour of India after a seven-month stint working for a solar power company in Israel. So it is fitting here at Michigan, as a second year doctoral student in electrical engineering, Tal is exploring new frontiers in navigation technology.

Tal is researching fabrication techniques for a micro rate-integrating gyroscope, using a vacuum mold and blowtorch. The device is called a wineglass gyroscope for two reasons. It looks like a wineglass with a sunken stem, a bit like a bundt cake pan, and operates by resonating like a flicked wine glass. 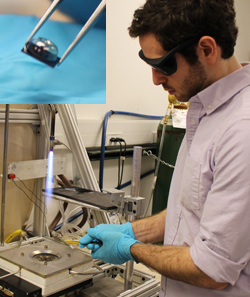 The longer Tal can get the device to resonate, the better the gyroscope will maintain an accurate read out, and accuracy is critical for this project. Funded by DARPA, the devices are slated for use in the guidance systems of missiles, satellites and unmanned aerial vehicles.

If he, in collaboration with his research team, can create a device with high enough performance, Tal believes it will be deployed just about everywhere, including on vehicles and even on people to help them navigate when GPS is not available. Many groups around the country are working on this project, but Tal says it is the devices built by Prof. Khalil Najafi’s research group that have the best performance.

Tal’s decision to enter a PhD program was influenced by his desire to work in MEMS research. He hopes to find a resourceful company where he can make a significant impact while maintaining a balance between work and family.

“I want to be on the cutting-edge of MEMS research. A lot of MEMS work up to this point has been to take an existing system and shrink it. I think the true potential and benefit of MEMS research is in enabling systems that could not exist except on the nano-scale. That’s where I want to contribute,” Tal said.

To prevent burnout, Tal rock climbs, goes camping and takes ballroom dancing lessons. His approach to life is predicated on finding balance, and it’s the most important bit of advice he would give to prospective graduate students.

“It’s really easy to get caught up in your studies, eat poorly and not get any exercise. But keeping your mind so narrowly focused on one track isn’t healthy,” says Tal. “Set aside some time at least once a week to socialize and get some activity in. Maintain a balance in your life!”

The award celebrates those who have gone above and beyond to service and support social justice, diversity, equity, and inclusion efforts. | Short Read
In the News
WDIVApr 1, 2020
University of Michigan gyroscope could reduce dependence on GPS in electronics