EECS: Electrical and Computer Engineering
September 25, 2014
The IEEE Daniel E. Noble award is a Technical Field Award, which is among the highest awards given.| Medium Read
Enlarge 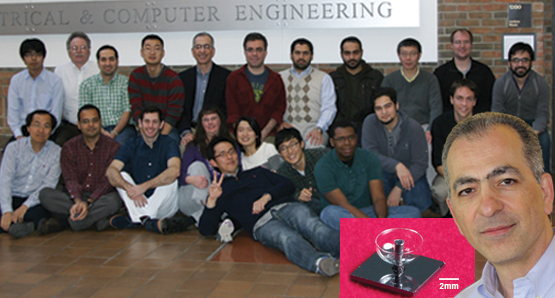 IMAGE:  Khalil Najafi with his research group, and a photo of a tiny 3D wineglass-shaped inertial sensor used for navigation devices that was designed and built by his team

Khalil Najafi, Schlumberger Professor of Engineering and Chair of Electrical and Computer Engineering, was selected to receive the 2015 IEEE Daniel E. Noble Award for Emerging Technologies, “For leadership in micro-electro-mechanical systems (MEMS), technologies, and devices and for seminal contributions to inertial devices and hermetic wafer-level packaging.” The IEEE Daniel E. Noble award is one of IEEE’s Technical Field Awards, which are among the highest awards given by IEEE.

Prof. Najafi has been a worldwide leader for nearly 30 years in the research and development of micromachined sensors, microelectromechanical systems (MEMS) and integrated microsystems. He has made lasting contributions in several different areas of microsensors, including fabrication and packaging technologies, inertial sensors, energy harvesters, implantable biomedical sensors, and integrated electronics for implantable neural prostheses. He has also accomplished seminal work in MEMS-based power sources.

In 1988, Dr. Najafi initiated perhaps the first focused microsensors packaging program in academia. He developed a biocompatible glass-silicon package for implantable biomedical sensors that has proven to be reliable in situ for more than two decades. Effective hermetic packaging is also critical in devices such as accelerometers, micromechanical resonators, and pressure sensors. This is an area of worldwide focus in both academica and industry, and Prof. Najafi leads one of the most advanced groups in this area worldwide.

In other recent work, his group developed a penny-sized vacuum system that was initially designed to help detect chemical weapons. The device can be mass-produced at low cost, and integrated with a variety of consumer-based microelectronic devices for a variety of applications (read the article in Popular Science).

As a final example of his research for emerging technologies – in the last decade Prof. Najafi has turned his attention to miniature energy harvesters to address the disproportionate amount of space devoted to the batteries needed to power miniaturized sensing devices. He developed piezoelectric energy harvesters that turn vibrations into electricity. These devices were more powerful and more efficient than any in its class. They can be incorporated into any wireless sensor network, including those found in industrial settings, as well as medical implants and automobile sensors (read more). Another potential source of energy scavenging is the flapping wings of flying insects (read more).

Prof. Najafi has co-founded two companies to bring some of this technology closer to the marketplace. Integrated Sensing Systems, Inc. (ISSYS) is a company specializing in the design, development, manufacture and commercialization of innovative MEMS products. ePack is a MEMS packaging company. He has more than 20 U.S. patents.

Prof. Najafi has been awarded the IEEE Sensors Technical Field Award, several best paper awards, and is a  Fellow of IEEE and the American Institute for Medical and Biological Engineering (AIMBE). He has earned several teaching awards at Michigan, including being named Arthur F. Thurnau Professor for outstanding contributions to undergraduate education. He received the U-M Henry Russel Award for outstanding achievement and scholarship, and received the U-M Distinguished Faculty Achievement Award for exceptional contributions in scholarship, teaching, and service. He received the Distinguished University Innovator Award in recognition of his development of innovative and transformative technologies.

Prof. Najafi will be presented with the award at the 2014 International Solid-State Circuits Conference, held February 22-26, 2015.

The IEEE Daniel E. Noble Award for Emerging Technologies, previously known as the Morris N. Liebmann Award, was established in 2000. The award is named in honor Daniel E. Noble, Executive Vice Chairman of the Board Emeritus of Motorola. Dr. Noble designed and installed the nation’s first statewide two-way radio communications system. The system was the first in the world to use FM technology. He received the IEEE Edison Medal in 1978 “for leadership and innovation in meeting important public needs, especially in developing mobile communications and solid-state electronics.”