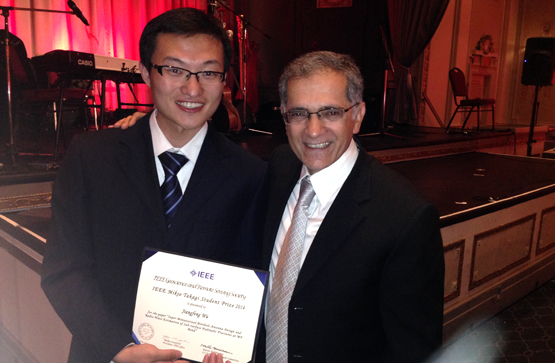 Mr. Wu received the award at IGARSS 2014 for his paper, Super-miniaturized Borehole Antenna Design and Radio-wave Estimation of Sub-surface Hydraulic Fractures at MF Band, co-authored by his advisor, Prof. Kamal Sarabandi. The topic of this year’s symposium was Energy and our Changing Planet.

Oil and natural gas still contribute to more than 55% of the power sources available worldwide. Hydraulic fracturing is been widely adopted by the petroleum industry to access the oil and gas currently trapped in layers of rock. A hole is bored into the earth and pressurized water, sand, and chemicals are used to create fissures in the rock; these fissures act like capillaries in the body to transport the oil and gas from the surrounding area into the pipeline and out of the earth.

According to Jiangfeng, “As the use of hydraulic fracturing has grown, concerns about its environmental and public health impacts have also increased. One of the most significant concerns is the potential for hazardous fluids injected into rock formations to result in water and soil contamination. The goal of this research is to be able to generate an accurate map of the fracturing area to prevent environmental damage, while optiziming the production efficiency of oil and natural gas.”

IMAGE:  Mr. Wu developed single-hole as well as multi-hole (shown above) imaging techniques to determine the range of the fractures in the earth caused by fracking.

Current electromagnetic techniques are able to detect fractures only ~25m from the source, using high-power transmitters and very sensitive receivers. Mr. Wu’s method can detect fractures ~2.5km from the source, using a medium frequency band imaging system to estimate the sub-surface fractures. The antenna he designed, measuring 4 meters in length and 10 cm in width, can be inserted into boreholes, and maintains high efficiency compared to other methods. The technique can be used for single-hole as well as multi-hole imaging.

Knowing how far the fractures extend will help keep the chemicals used in the process away from water and soil that could be contaminated in the process, and at the same time will create a mapping system the companies can use to inform their fracking activity.