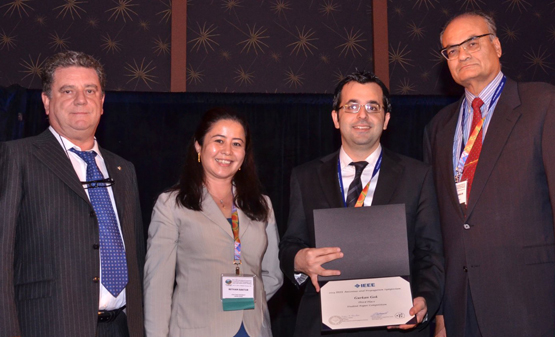 IMAGE:  Gurkan Gok receiving his award at the 2014 AP-S Conference 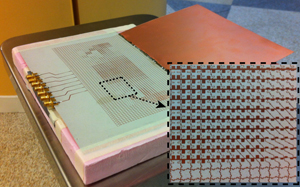 In the paper, Mr. Gok describes an antenna beam former that he developed using metamaterials:  finely structured materials with tailored electromagnetic properties. Beam formers are devices used to control the direction of a received/transmitted wireless signal. They can be used to track objects in radar systems, as well as improve communication quality and reduce interference in communication systems.

Gurkan’s beam former consists of precisely patterned metallic traces (a tensor transmission-line metamaterial) that provide independent control of the phase and power flow of electromagnetic fields. This added control is used to form antenna beams in different directions as the input/feed location is switched.

The developed antenna system promises a large bandwidth of operation and a wide angle of coverage. It can be fabricated using standard printed circuit board processing, making it low cost and light weight.

“The design strategy introduced in the development of this antenna beam former provides new opportunities in smart antenna development,” said Gurkan. “Such antenna systems can be integrated onto vehicles and other platforms.”