Alumni explore lots of EECS-related engineering with their kids

They took the campus by storm. Three hundred and eighty alumni and children stretched across North Campus June 26 and 27, dabbling in drones and bones, rockets and radioactives.

No, it wasn’t a hostile takeover. It was the second annual Xplore Engineering summer camp, designed especially for alumni to introduce their children, grandchildren, nieces and nephews to the joy of engineering through a variety of hands-on experiences. And many of those activities fit right into what students are learning in EECS, for example:

It’s a Small World After All!

How small is a nano? What happens when we shrink items by 10,000 times? Children xplored the fascinating concepts of nanotechnology and tour the state-of-the-art Lurie Nanofabrication Facility. 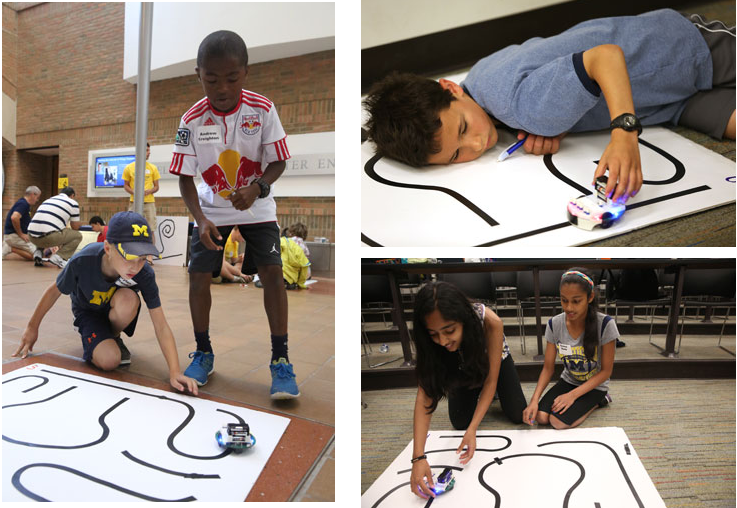 Children created an autonomous miniature robot that navigated its own way through a complex maize. They learned to program simple commands that allowed the robot to identify obstacles, and finally, put their ingenuity and cleverness to the test in a contest against other participants.

Drones: From Toys to Spy-Planes

Children turned a common R/C copter into a delivery drone. They also learned how to outfit a drone with low-cost sensors and software that can capture video from the sky and fly without joysticks.

Children experienced how the energy of the wind can be harnessed and converted to electricity. They learned about wind energy and how generators and motors work to harness the energy as well as assembled their own wind energy harvesting system to take home.

Alumni came from as far as California and Israel to participate in the event. Each pair, which included one adult and a child entering fourth to seventh grade, took part in a series of workshops. In addition to the workshops mentioned above, they could be seen breaking bones in biomedical engineering, building bridges in civil engineering, and walking across non-Newtonian fluids in chemical engineering.

The event was organized by MconneX, a U-M College of Engineering initiative aimed at offering opportunities for alumni to reconnect with the Michigan Engineering community. It included the workshops, lunch with student teams, tours of labs on campus and a visit to Crisler Arena and Michigan Stadium.

See all of the photos from Xplore Engineering.