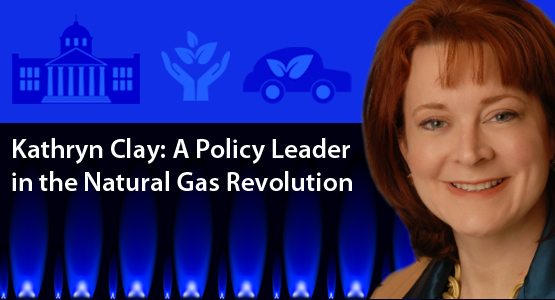 IMAGE:  "Thanks to my training at Michigan, I am able to come at energy policy with a scientific systems approach, and add something new to the discussion." Kathryn Clay

Dr. Kathryn Clay believes, “The only way to make real progress for the country is to find the common ground upon which we can move forward to advance everyone’s interests.” A natural coalition builder, Kathryn implements this philosophy in her current job as Vice President of Policy Strategy at the American Gas Association (AGA), and it’s as helpful now as it was during her career on Capitol Hill where she influenced key energy policy.

Kathryn’s political baptism by fire came after graduation when she received a prestigious science fellowship with the American Association for the Advancement of Science (AAAS) in Washington D.C. After going door to door, she found a position with Senator Daniel Patrick Moynihan (D-NY), who was on the Environment and Public Works Committee, and worked on aggressive legislation to reduce emissions from power plants.

“That fellowship was such an amazing experience that I knew I wanted to pursue a career in science policy,” Kathryn said.

Kathryn helped usher three bills into law while a member of the professional staff of the House Committee on Science, and later with the Senate Committee on Energy and Natural Resources. One of these bills was the Energy Policy Act of 2005, which was the first of its kind since 1992.

Kathryn was also an influential leader in drafting the Energy Independence and Security Act (EISA) and the America COMPETES Act, both of which passed in 2007. “The COMPETES Act reinvigorated America’s investment in the science and technology that is so important to driving the innovation that makes America competitive,” said Kathryn.

Kathryn believes the country would benefit greatly if more scientific and technically trained people went into positions of influence such as science policy leaders and journalists.

To help train individuals for this work, she co-founded the Program on Science in the Public Interest (SPI) at Georgetown University in 2006, and both designed and taught the course, “Science and Society: Global Challenges.” The focus of the course was solution-centered public policy development. For five years, students registered for the course in droves, making it a rousing success.

She has also spent time teaching science to kids from local grade schools, an activity that Kathryn said “was fantastic preparation for working in science policy. Middle school students are the toughest audience possible. If you can teach something to 12 year olds, then you can absolutely explain it to members of Congress.”

Leader in the Auto and Natural Gas Industry

While a graduate student at Michigan, Kathryn worked at Ford as a research fellow developing batteries for electric cars. In 2008, she returned to these roots as Director of Research at the Alliance of Automobile Manufacturers (AAM). She became VP of Research and Technology Policy, and developed industry-wide policy positions on alternative fuel vehicles, particularly of electric vehicles.

Today, as the Vice President of Policy Strategy for the American Gas Association (AGA), Kathryn is leading the drive to keep America competitive and secure through the adoption of natural gas as a key alternative fuel for vehicles.

The shale gas revolution is profoundly transforming America’s energy landscape. The United States is now the world’s top producer of natural gas, and this stable supply of cheap energy is creating a wave of economic opportunity around the country. Natural gas is lowering transportation and utility costs, saving cities money in transit, incentivizing industries to increase production, and saving Americans money on household energy bills

“Natural gas is half the price of gasoline or diesel, and it’s projected that by 2035, households using natural gas for heating and appliances will have just one-quarter the energy costs of all-electric homes,” Kathryn explained.

Having such key leadership positions in the U.S. energy arena can be completely consuming. “When I realized I was becoming a typical Washington workaholic, I adopted a New Year’s resolution to go to a live performance of some kind once a month. I have kept that resolution for five years running because Washington is a wonderfully rich and vibrant city.” She also plays the flute, and has taken up oil painting.

Recalling her time at Michigan, Kathryn said, “Ann Arbor is a wonderful town, and I don’t get back nearly as often as I’d like. I like Washington, but I love Ann Arbor.”

“Real leadership is being able to put your perspective aside long enough to understand the other views in the room and find a way forward.”