EECS: Electrical and Computer Engineering
April 24, 2014
He is a founding member of Own It, and is dedicated to cultivating an engineering community that feels an inherent responsibility to live ethically.| Short Read
Enlarge 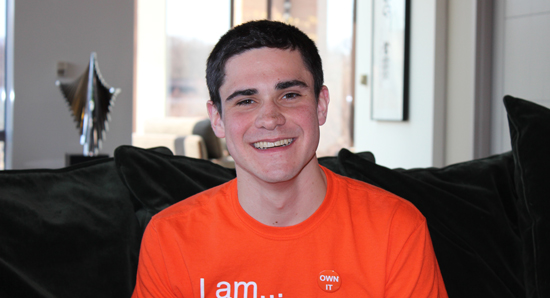 Nicholas Clift, a master’s student in electrical engineering, is a charismatic force for social justice. He is a founding member of Own It, and is dedicated to cultivating an engineering community that feels a responsibility to each other, and an inherent responsibility to live ethically. For this initiative, for his service efforts in past years, and in recognition of his academic achievement, he was recently named Graduate Student of the Year, one of the Michigan Difference Student Leadership Awards sponsored by the Student Life Office.

“I think we have a lot of deeply compassionate people in the College of Engineering, but we need to create spaces where we are expressing that compassion and support,” Nick said. This transition from compassion to its active expression is at the heart of Nick’s positive energy, as well as Own It’s motto:

A challenge to be your most authentic self while supporting and affirming others in doing the same.

One of Nick’s proudest moments as a student at Michigan was Own It’s kick-off event at Chesebrough Auditorium last semester. “It exposed a lot of people to the experiences of lesbian, gay, bisexual and transgender individuals,” Nick explained. “It meant a lot to me because it represented everything Own It is about, which is, people who are not directly affected by an issue agreeing to be a part of making life better for someone else. If one person came out because of our event that was worth all the effort. That’s victory!” Nick exclaimed.

The focus of the current semester has been mental health. A staff member has already thanked Nick for bringing this topic into the open.

As an undergraduate student, he published the article, “Living our Ideals,” in The Michigan Daily. His volunteer work with The Detroit Partnership helped him earn the title, Mr. Michigan in 2013.

Nick loves space, and it was his desire to work on spacecraft that brought him to electrical engineering. He has completed internships at the Michigan Exploration Lab, NASA and Boeing.

He is a participant in the Engineering Global Leadership (EGL) Honors program, and his capstone project was to work with Youth for Understanding USA. It was perhaps that experience that helped set his new course, for nonprofit work. “I love EE and would choose it again. I just want to do slightly different things now,” he said.

After graduation in April, Nick will join McKinsey & Company as a management consultant in operations practice. “I would love to ultimately be affiliated with a non-profit, perhaps in education” said Nick. But first, he’s interested in honing his leadership and business skills.