EECS: Electrical and Computer Engineering
April 1, 2014
Instead of a battery, the chip Nathan is engineering uses two solar cells that look like they belong on a calculator. | Short Read
Enlarge 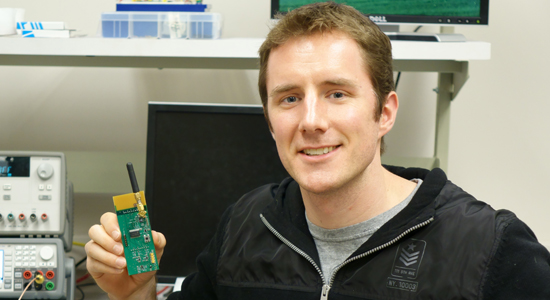 After graduating from the University of San Diego with his bachelor’s degree in electrical engineering, Nathan Roberts landed a good job at a semiconductor firm in Oregon, bought a house – and then a boat. He gave it all up to return to graduate school, and is now a PhD candidate conducting research in one of technology’s hottest new fields – ultra-low-power circuits for the Internet of Things (IoT).

IoT refers to the technological state in which all of the objects that constitute our world, from the thermostats in our homes to the roads we drive on, become an interconnected network of shared information and control.

It is estimated that 50 billion devices will constitute the IoT by 2020. “That’s a lot of batteries,” Nathan said. “We are working from the circuits side to lower the power devices need to run.” 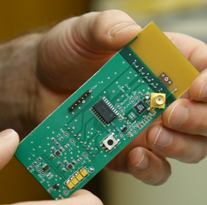 IMAGE:  This battery-less radio consumes 100nW of power. It has 2 solar cells that power the device, and a power management system that tells the radio to wake up the chip after it receives a specific signal.

Instead of a battery, the chip Nathan is engineering uses two solar cells that look like they belong on a calculator. “It’s not all that impressive to look at, but the technology that went into this chip is really exciting,” Nathan said. “A Bluetooth chip requires more than 30mW to communicate, whereas our chip can communicate at 120nW.”

The first generation of this chip, which earned Nathan a Best Paper Award at the 2012 IEEE Subthreshold Microelectronics Conference, was a simple wake-up radio that toggled on when it detected a signal. The problem was, since the chip was programmed to detect any energy, it could potentially wake up at odd times, such when someone nearby started microwaving popcorn.

He solved that problem by programming the chip to “wake up” only when it sensed a specific 15 bit pulsed code.  The chip is now in its third iteration and capable of scanning up to four different pulsed codes.

Nathan is a member of Prof. David Wentzloff’s research group. Last summer he interned at a startup company co-founded by Prof. Wentzloff calledPsiKick, which is developing next-generation ultra-low-power wireless sensing devices for the IoT. Examples of these devices include MEMS radios and sensors for wearable devices that will be capable of EKG and hydration monitoring, and thermoelectric generators (TEGs) that will power devices from body heat alone.

Nathan may not get to do as much snowboarding and boating as he once did in Oregon, but he doesn’t seem to mind. “My work and hobbies are now very similar,” said Nathan. “When you like what you do it’s not that hard to focus on one thing. I’m just a techy type guy.”

The resources available at U-M blow him away. “I came from industry,” said Nathan, “and this lab is better equipped than what we had. Also, much of the equipment is identical to what I worked on in my last job.”

He appreciates the environment here as well, saying, “I’ve never felt it was my peers’ goal to beat me. Despite the natural competition to excel, there are always nice people around who are willing to work with you. I also really like how smart people are here. It’s motivating to try to do something good to prove yourself.”

Nathan is getting close to graduating, and will have many career options open to him. One thing he’s certain of is he wants to make an impact.

“Batteries don’t get better at the speed that circuits do,” said Nathan. “I think there is a market for my research. People don’t want to charge their gizmos every day. If we can enable, instead of a day, maybe a year or two years or even ten years, then this thing can take off exponentially.”