Christopher Boyd grew up in Detroit, MI and developed an interest in technology at a young age. His parents encouraged him to try different things, “Early on I was involved in the Detroit Area Pre-College Engineering Program (DAPCEP), and summer camps at The Detroit Science Center and The Henry Ford Museum,” Chris said, where he discovered the world of engineering, a world that captured his imagination.

Chris joined the robotics team at Cass Technical High School and later enrolled at Michigan as an undergraduate student in electrical engineering, focusing on circuits and digital signal processing. At U-M he mentored the current members of that same robotics team at a national competition hosted by U-M’s Detroit Center. As an undergraduate he was also part of the first graduating class of the MSTEM Academy, a program sponsored by the U-M Center for Diversity and Outreach. Chris remarked, “MSTEM provided me an academic and social community which prepared me for the challenges of an engineering program.”

Now, as a doctoral student in Prof. Khalil Najafi’s research group, Chris develops, implements, and tests control systems for MEMS inertial sensors, which are used to detect acceleration, vibration, rotation, tilt, and other attributes related to motion sensing. His goal is to implement these control systems using integrated circuits. 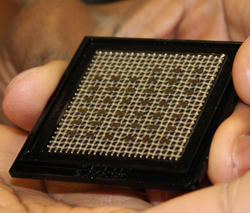 IMAGE:  Chris and Dr. Jong-Kwan Woo, a Research Fellow in the Najafi Group, designed this chip, which contains control circuitry for MEMS gyroscopes.

Chris says the research he is doing now is related to his undergraduate research experience in robotics. “When I was working in robotics, I used many different kinds of sensors. For one project we used gyroscopes and accelerometers from a large commercial inertial measurement unit (IMU). The system provided accurate measurements, but was bulky and consumed a lot of power. What we’re trying to do is get performance comparable to macro-scale sensors, while reducing power consumption and size. We could then apply inertial sensing to many new applications.”

“Our goal is to have a complete system that can fit into one small package,” Chris explained.
Chris’ group is researching how sensors can be used for navigation in GPS denied zones. However, Chris sees the potential for many other applications, including detecting if a patient has fallen, environmental sensing, tracking people, advancing the field of robotics, or even sensing the vibrations of an earthquake.

It was the applications inherent in these devices that attracted Chris to this area of research. “I knew I wanted to do something related to circuits, but there are so many things you can do with circuits. I thought this project was a really cool application.”

When he isn’t doing research, Chris serves as the vice president of SMESG (Society of Minority Engineers and Scientists – Graduate Component). He enjoys meeting people at social events held by student societies, and playing intramural softball and wallyball.

He also enjoys all the perks of living in Ann Arbor. “I like the college town feel of Ann Arbor. There are always different shows to go to on campus, and you can just walk down the street to find good food from every part of the world.”

Whether it’s choosing research or meeting new people, Christopher’s advice to students is all about broadening horizons.

If you’re still an undergrad, Chris says to experiment with as many projects in as many different areas of EECS as you can. “The EECS department is so broad, that you have to try different things so that you know what you really like.” He also recommends exploring the U-M community. “A lot of student societies have social and professional networking events where you can go and meet people. So, broaden your horizons by going to these events and try to develop friendships inside and outside of EECS.”