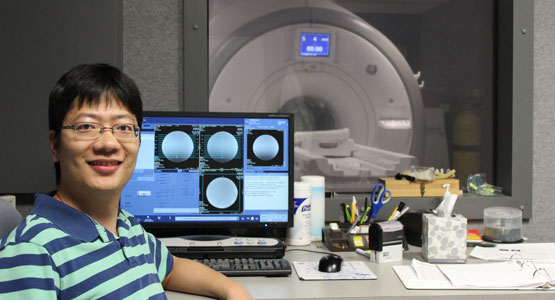 IMAGE:  Hao Sun working in one of the magnetic resonance labs on campus. Hao designed optimized RF pulse and gradient waveforms for the MRI scanner in the background to obtain better data, which then needs to be optimally reconstructed to get the best possible image.

Hao Sun, a graduate student in the Electrical Engineering:Systems program, will receive 3 paper awards at the 2014 International Society for Magnetic Resonance in Medicine (ISMRM) meeting. held May 10-16 in Milan, Italy, for his research in the area of magnetic resonance imaging (MRI). The goal of this society is to push the limits of what can be measured with magnetic resonance for the benefit of all mankind. This is the 30th anniversary year of ISMRM’s journal, Magnetic Resonance in Medicine; the society also publishes the Journal of Magnetic Resonance Imaging.

Hao’s research is focused on improving the quality of images from magnetic resonance imaging (MRI) pulse design. The goal is to achieve a higher image quality, at a higher signal level and with less signal artifact from magnetic resonance imaging than is currently available. A signal artifact is any visual anomoly that appears in an image due to deficiencies in equipment or acquisition techniques. As described in the abstract, Small-tip fast recovery (STFR) imaging using spectrally tailored pulse, he is doing this by optimizing the RF pulses and gradient waveforms used in the MRI scanner.

As shown in the circled areas of the image below, extraneous features will sometimes appear in an MR image that is acquired using a technique known as bSSFP (balanced steady state free precession). The traditional way to deal with these artifacts is to take as many as four individual bSSFP images, and then combine them to arrive at the artifact-free image. This takes extra time to acquire and then process the images, and multiple acquisitions may lead to confounding results in some applications like the functional MRI (fMRI). Hao Sun uses a technique called spectral-STFR (small tip fast recovery) to achieve a better quality image using only one shot. Another advantage of this technique is its compatibility with magnetization preparation pulses (e.g., fat saturation pulse), which is not compatible with bSSFP. This technique can be particularly beneficial in coronary imaging and cranial nerve imaging. 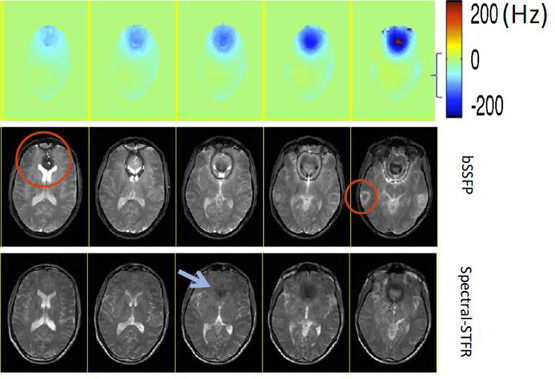 IMAGE:  Comparison between a standard bSSFP image (top) and the same image processed using spectral-STFR (bottom). The spectral-STFR image successfully removes the banding artifacts (irregularities highlighted with a red circle) within the targeted frequency range. The blue arrow indicates where the signal drop occurs when off-resonance goes beyond the target range.
Enlarge

Mr. Sun received his bacherlor’s degree from the University of Hong Kong. Since coming to Michigan, he has published two journal articles and eight conference papers, including the three named above. A patent application has been filed for the technique using spectral-STFR.