by Nicole Casal Moore
Michigan Medicine
March 14, 2014
After surgeons at the University of Michigan’s C.S. Mott Children’s Hospital implanted 3D printed devices to open up Garrett’s airways, his parents are now planning to take their son home to their house in Utah for the very first time.| Medium Read
Enlarge 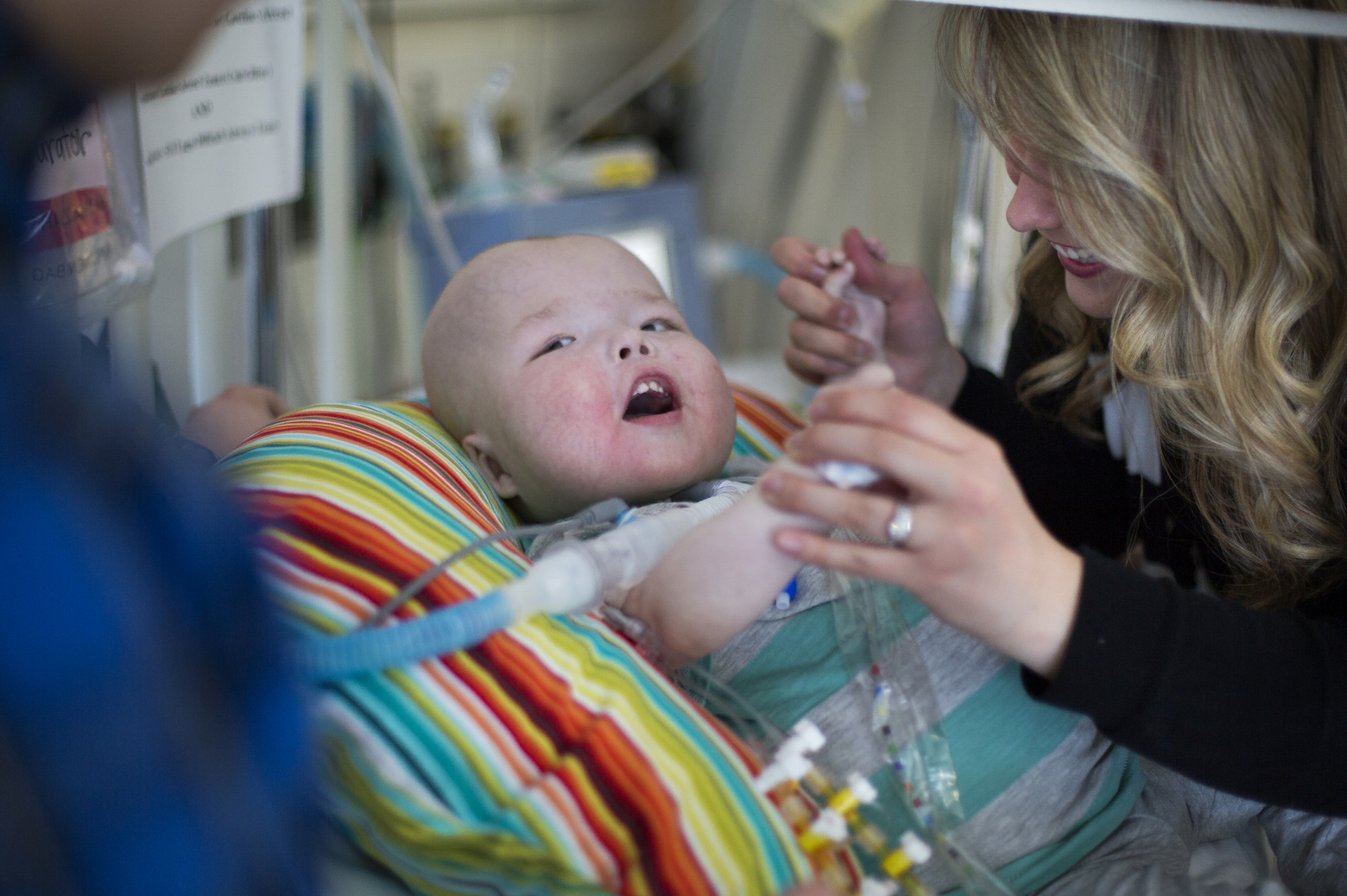 n his 18 months of life, Garrett Peterson has never gone home, spending his days in hospital beds tethered to ventilators that even at the highest settings couldn’t prevent his breathing from periodically stopping.

His condition was so tenuous that often his parents could not hold him for fear of compromising his breathing. But after surgeons at the University of Michigan’s C.S. Mott Children’s Hospital implanted 3D printed devices to open up Garrett’s airways, his parents are now planning to take their son home to their house in Utah for the very first time.

“It is a tremendous feeling to know that this device has saved another child. We believe there are many other applications for these techniques, but to see the impact living and breathing in front of you is overwhelming.”

Garrett has a condition called tetralogy of Fallot with absent pulmonary valve, which can put tremendous pressure on the airways. In Garrett’s case, he developed severe tracheobronchomalacia, or softening of his trachea and bronchi, and his airways collapsed to the point that they were reduced to just small slits.

The Petersons spent months watching their child stop breathing and turn blue sometimes four to five times a day – forcing medical personnel to resuscitate him with heavy medication or other interventions.

Garrett needed to be on a ventilator at pressure levels that had reached the maximum, and he was not improving. He was often on strong medication and even had been put into a medically-induced coma because he would work against the ventilator if he was awake.

“It’s really hard to watch your child basically suffocate and pass out before you could revive him and bring him back, over and over,” says Jake Peterson, Garrett’s father.

“Nothing would stop him from turning blue. Just lifting his legs for diaper change would collapse his airways and that was it. There was nothing we could do to help him,” says Natalie Peterson, Garrett’s mother.

The Petersons had read an article in May 2013 about the first baby saved by Hollister and Green’s device and believed Garrett’s case might be similar. That baby just celebrated his second birthday and continues to be free of all symptoms related to his tracheobronchomalacia.

The Petersons contacted Green at U-M.

“We thought this could be Garrett’s chance of not only getting home but also getting off a ventilator,” Natalie Peterson says.

During much of 2013, the Petersons went back and forth trying to decide if the 3D printed device was the right option. In December, Garrett’s condition took a turn for the worse. His gut was shutting down from the high ventilator pressures.  He had been in an intensive care unit for over a month and was in critical condition.

The Petersons decided to come to C.S. Mott Children’s Hospital.

“It was highly questionable whether or not he would survive,” Green says about Garrett’s condition.

Hollister and Green used provisions for emergency clearance from the Food and Drug Administration to create and implant a tracheal splint for Garrett made from a biopolymer called polycaprolactone.

Hollister created a 3D model of Garrett’s airway and specially designed splints for a custom fit on the baby’s bronchi.

Hollister was able to make the custom-designed, custom-fabricated device using high-resolution imaging and computer-aided design. The device was created directly from a CT scan of Garrett’s trachea and bronchi, integrating an image-based computer model with laser-based 3D printing to produce the splint.

On Jan. 31, 2014, Richard G. Ohye, M.D., the head of Pediatric Cardiovascular Surgery at C.S. Mott, took on the intricate task of sewing two devices on two spots of Garrett’s airway, assisted by Green. The splints were sewn around Garrett’s right and left bronchi to expand the airways and give it external support to aid proper growth. Over about three years, the splint will be reabsorbed by the body.

“There we go, up and down,” said Green as the lungs began to inflate during the surgery. “We know the splint is working, he’s able to ventilate both lungs. I’m very optimistic for him.”

As he gets strong enough to breathe on his own for the first time, Garrett is on continually decreasing ventilator support, now at less than a quarter of the pressure needed before. He’s also done short stints completely off the ventilator.

Even if he needs some ventilator support for a little while longer, it’s low enough now that he can use a home ventilator and his gut is working again

“It is a tremendous feeling to know that this device has saved another child,” says Hollister. “We believe there are many other applications for these techniques, but to see the impact living and breathing in front of you is overwhelming.”

Hollister says it is hoped that Garrett will need about two to three years for his trachea to remodel and grow into a healthy state. That’s about how long this material will take to dissolve into the body, says Hollister. 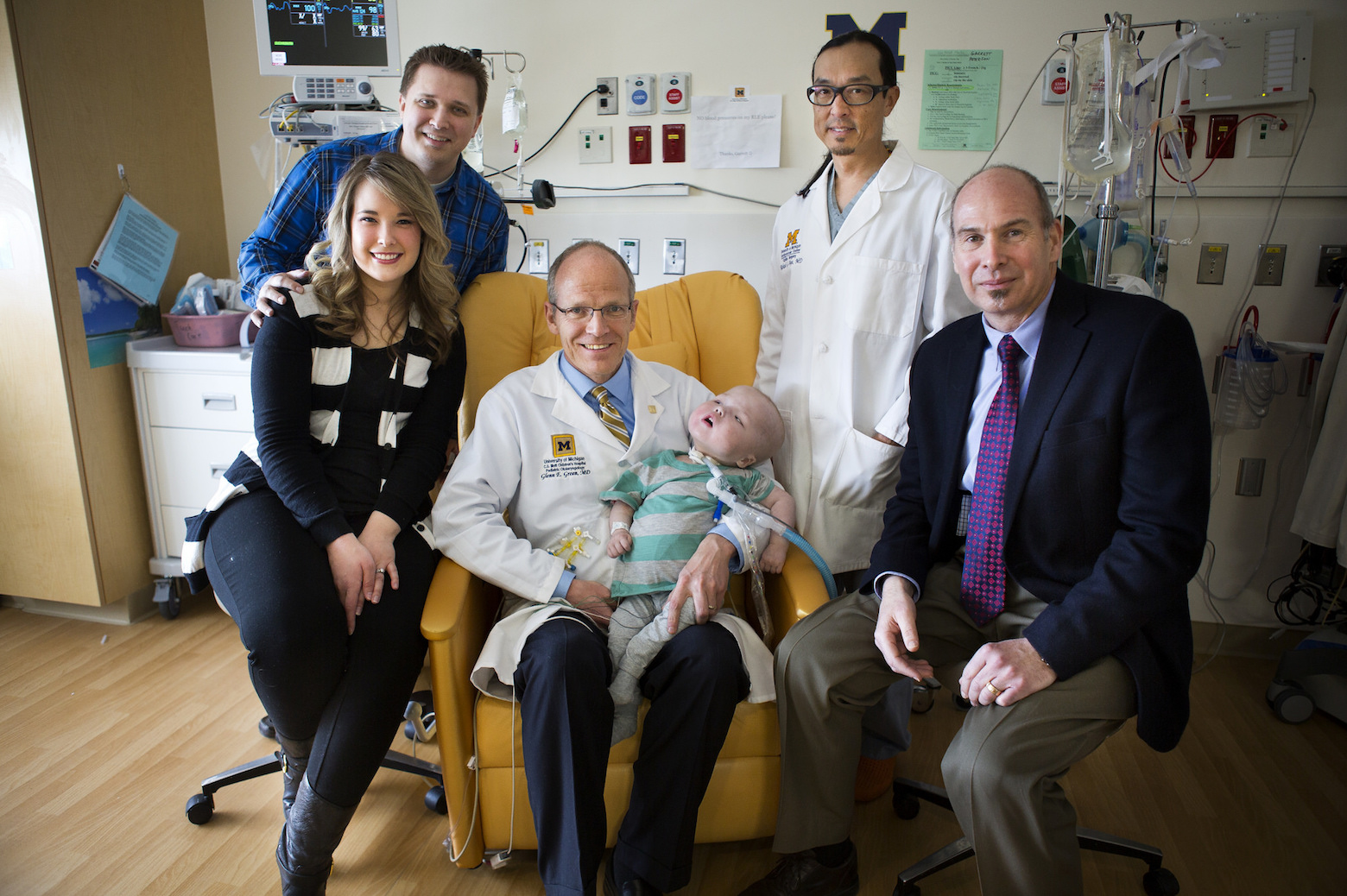 Severe cases, like Garrett’s, are about 10 percent of that number. And they are frightening, says Green. A normal cold can cause a baby to stop breathing.

“Severe tracheobronchomalacia has been a condition that has frustrated me for years,” says Green. “I’ve seen children die from it. To see this device work, for a second time, it’s a major accomplishment and offers hope for these children.”

The Petersons say they are full of hope for the future. Garrett’s smiles have returned, and they are amazed that they could be home with their baby boy in just a few months.

“We needed to give him a chance and that’s what these splints have done,” says Natalie Peterson.