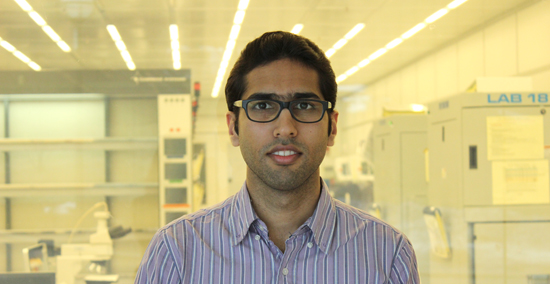 IMAGE:  Girish Kulkarni in front of the Lurie Nanofabrication Facility, where he built his nanoelectronic sensor

Girish Kulkarni, a graduate student in the Electrical Engineering Program, received a U-M Rackham Predoctoral Fellowship to support his dissertation research on Carbon Nanoelectronic Heterodyne Sensors for Chemical and Biological Detection. This fellowship is awarded to outstanding doctoral candidates in the final stages of their program who are unusually creative, ambitious and risk-taking. 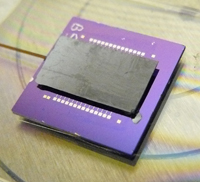 By taking a novel approach to sensing, Girish’s research has resulted in a new paradigm in sensor technology that promises both high-speed and highly-sensitive detection, which are critical for practical applications. He has built sensors that can be used not only to detect hazardous chemical leaks in a lab or chemical attacks on a battlefield, but also in point-of-care diagnostics for example measuring PSA levels and other biomarkers in blood; he believes that one day these sensors can detect health irregularities by breath alone.

“And our devices are so small they can be put almost anywhere,” Girish added.

“Nanoelectronic sensors typically depend on detecting charge transfer between the sensor and a molecule in air or in solution,” explained Girish. “It is well known that charge transfer is a rate limiting step for molecular detection leading to extremely slow response and recovery. Moreover, conventional charge-based detection techniques fail in solution due to ionic screening effect, which can be overcome only through time-consuming steps like desalting, making them impractical for real-time sensing.”

“We use a technique called heterodyne mixing,” Girish continued. “Instead of detecting molecular charge, we look at the interaction between the dipoles associated with these molecules and the nanosensor at high frequencies.”

Kulkarni’s approach gives sub-second response times and parts-per-billion level sensitivity simultaneously. The technique has been demonstrated on carbon nanotubes and graphene, though it can also be used on any nanoelectronic sensor platform and works both for solution and gas phase detection.

And because his devices are less than a micron-by-micron is size, they are conducive for multiplexed detection. The graphene heterodyne sensor has been shown to detect 20 different volatile organic compounds on one small device, with many more possible.

Girish Kulkarni is advised by Prof. Zhaohui Zhong, who has done pioneering work in graphene. Girish came to Michigan in 2008, the same year as his advisor; he was attracted by the opportunities Prof. Zhong offered to new students joining his group.

Those opportunities have only increased for Girish, who plans to continue investigating and perhaps one day commercializing this technology.