by Nicole Casal Moore
Michigan Engineering
January 28, 2014
This U-M experiment won’t immediately address the question of why some exhibit symptoms down the road and others don’t, but the researchers are laying groundwork for finding the answer.| Medium Read
How head-impact sensors might one day help athletes, coaches and doctors identify more dangerous hits that could lead to concussions. Michigan Engineering researchers are helping to test a new high-profile device.

The head of a crash-test dummy wore a football helmet as it hung upside-down on a laboratory drop tower. James Eckner, M.D., stood on a ladder next to it holding its tether. He counted to five and let go.

The bust smacked into another just like it three feet below – with about the force of two linemen colliding at the start of a play.

How hard was the hit? Where was it centered? And what reactions did it cause in the defensive dummy head? Sensors sent answers to a laptop across the room.

It’ll take weeks for the researchers to fully analyze the data from several days of drops – part of an effort in Michigan Engineering’s Biomechanics Research Lab to help improve understanding of how the head and brain react to impacts. It’s a ripe field, as the sports and science communities are becoming aware of the devastating long-term effects that decades’ worth of concussions and head hits can have on players. 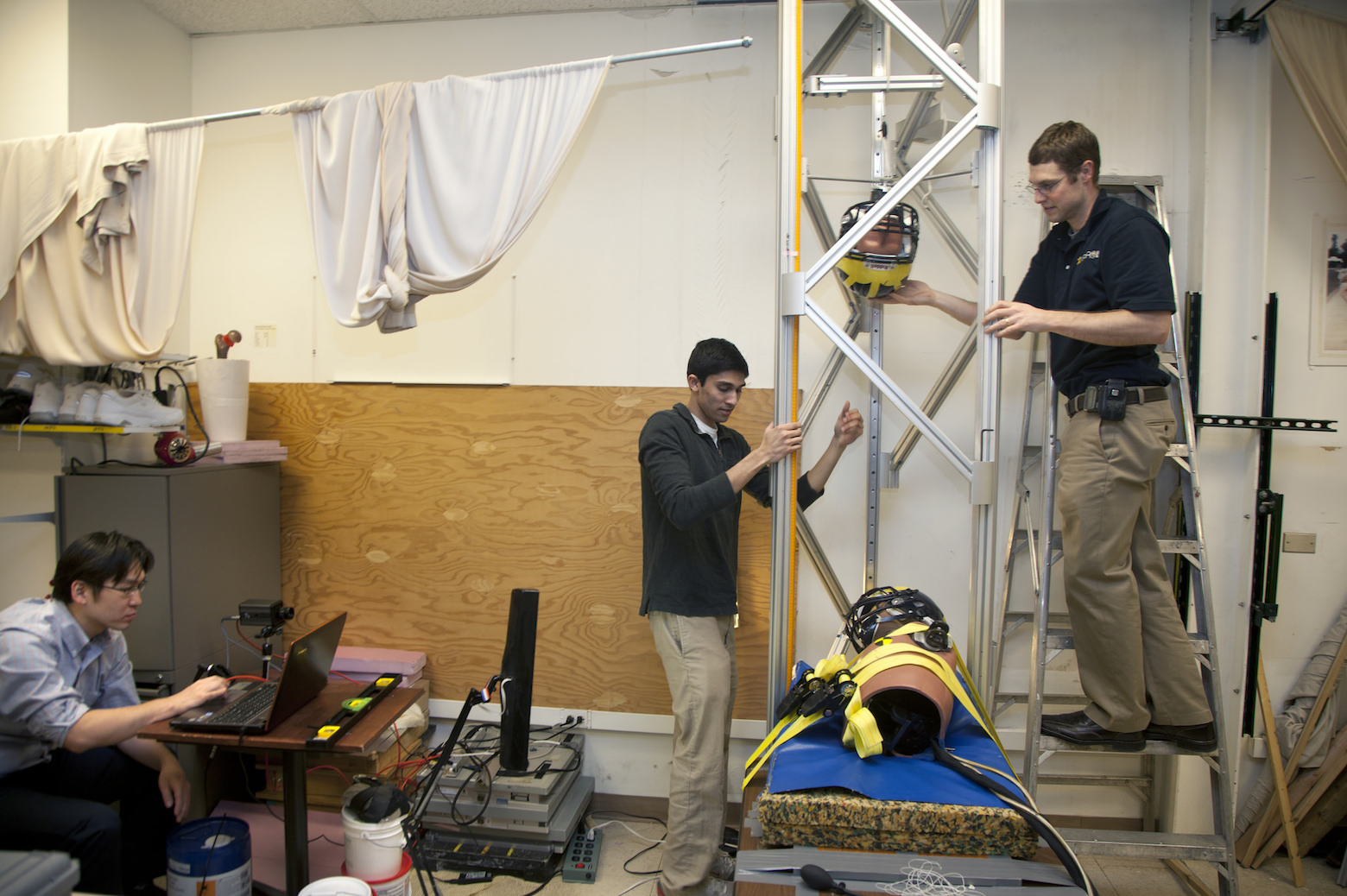 “There’s a growing number of athletes that seem to be affected by these later on in life,” said Eckner, an assistant professor of Physical Medicine and Rehabilitation at the U-M Medical School. “But most athletes don’t seem to have these problems as they age and so the tricky thing is to figure out what is causing this in one athlete, but not in another.”

Chronic traumatic encephalopathy, a progressive and degenerative disease that involves early-onset dementia, depression and trouble controlling impulses, has been found in the autopsied brains of more than 50 former NFL players. The league has agreed to a hefty settlement with thousands of former players who say officials hid the dangers.

This U-M experiment won’t immediately address the question of why some exhibit symptoms down the road and others don’t, but the researchers are laying groundwork for finding the answer. They’re comparing two high-profile head-impact monitoring systems – Riddell’s Head Impact Telemetry System (HITS) and the newer X2 Biosystems’ X-Patch. Their goal is to see if the readings match up so researchers can better interpret the data the newer system provides.

“There are a lot of papers written using the HITS, but there really aren’t papers written yet that use the X-Patch system. When they start to be written, we want to make sure we’re comparing apples to apples,” Eckner said.

Neither system purports to be a concussion catch-all, but they can serve as another set of eyes to alert coaches and trainers to potentially harmful hits. HITS, developed in 2002, studs a football helmet with a handful of accelerometers that measure motion in a straight line. It can say where a blow falls and measure how fast the head accelerates as a collision pushes and twists it. It gets at the twist indirectly with an algorithm that uses the accelerometer data. X-Patch is a finger-tip-sized device worn behind the ear. It also uses accelerometers to measure linear motion, but tracks rotation speed more directly with a gyroscope similar to the ones that help iPhones calculate their orientations. In recent years, researchers have come to suspect that head rotation may play an important role in concussions and so this direct measurement could prove valuable.

Because the X-Patch is applied right on the skin, the researchers say it could offer athletes more versatility and give the research community a clearer picture of how the head moves in space.

“The trouble is, the helmet’s not firmly attached to the head. It can slide,” said James Ashton-Miller, research professor of biomedical engineering and mechanical engineering and director of the Biomechanics Lab. “So you get slippage between the helmet and the head, making it more difficult to predict how the brain moves inside the skull.”

In the U-M experiments, the stationary dummy wore both systems, and it contained sensors of its own for another point of comparison. The team mimicked a variety of impacts that could happen during a football game – hits from the front, back and side, and from different heights to simulate different impact velocities.

It’s all in the name of making football, and potentially other sports, safer. The researchers say tools like these could do just that, when coupled with trained experts. By helping to identify more concussions, these sensors could help medical providers, coaches, and families decide when to sideline a player for a game or a season. They might also be used to keep track of wallops over a player’s career and raise flags as they rack up. And more immediately, they could help researchers test whether wearing certain equipment or strengthening particular muscles could help players protect themselves.

Ashton-Miller and Eckner and their colleagues on the Michigan NeuroSport team in kinesiology and neurology are studying differences in head impact exposure in men’s and women’s ice hockey. They’re also doing some of the first studies on how neck strength influences head motion after collisions in young people.

“I think the ultimate goal is still that one could predict which hits are going to cause concussions based on the biomechanics of the impact,” Eckner said. “We’re a long way away from that goal, but it would be the greatest benefit that these systems could provide to help players, coaches, team doctors, and athletic trainers.”